With the many stories touting the strength of athleisure apparel mixed with the aisles of workout apparel in stores, it may come as a surprise that consumers spent less on activewear last year than in previous seasons. Interestingly, though, they actually increased their overall activity levels in the U.S. While manufacturers may be questioning what is happening at retail, they might consider the fibers being used just aren’t what the consumer is seeking.

The Physical Activity Council tracks sports, fitness, and recreation participation in the U.S. It found that in 2016, most sport categories saw an increase in participation, with fitness and team sports seeing the biggest gains. The report found inactivity decreased 0.2 percent. However, the report found spending on sports equipment, apparel, and footwear decreased, from 44 percent of participants who made purchases in 2015 to 42.8 percent in 2016.

Over the years, the activewear industry has made a big shift toward synthetics. Manufacturers promoted performance technologies meant to keep the wearer cooler and drier, so they could improve their workout. But the pieces often came with a significantly higher price tag than styles made of natural fiber. At the same time, a style shift has been occurring among consumers — they began to embrace athleisure apparel, and often worked casual pieces like yoga pants, joggers, and hoodies into their everyday wardrobes. Often enough, these pieces could be worn for a trip to the gym or a trip to the mall.

Make It but Don't Fake It: Keep Your Sustainability Promises

Despite the changing style trend and the new performance technologies, The Atlantic reports that total consumer spending on apparel has decreased by 20 percent this century. Meanwhile, a report by Technopak states that the current global demand for fiber and yarn is split into about 41 percent for cotton and other natural fibers and 59 percent for man-made fibers. The report points out that makers like that man-made fibers can more easily be tweaked than natural fibers, which reduces investment costs.

While that may seem to be good for a manufacturer’s bottom line, it doesn’t make any difference if consumers aren’t buying it. The Cotton Incorporated Retail Monitor™ Survey find U.S. retailers are continuing to rely on discounts overall to drive traffic to their stores and get customers to spend. The survey found that a few years ago, the gap between sale offerings in non-active apparel compared to active apparel was much larger than it was today. Today, the majority of activewear is offered on sale, up from 39 percent a few years ago.

Perhaps manufacturers should consider that in general, 81 percent of consumers say cotton is their favorite fabric to wear, according to the Cotton Incorporated Lifestyle Monitor™ research.  Beyond that, 77 percent feel better quality garments are made from all natural fibers such as cotton, and 66 percent of shoppers are wiling to pay more for clothes made from natural fibers. 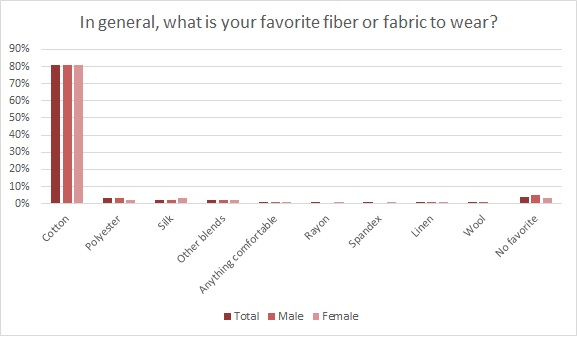 In an effort to appeal to this consumer preference, a lot of manufacturers have introduced activewear whose fabrics mimic the look and feel of natural fibers like cotton, but whose price points reflect a technical piece of apparel. However, while 65 percent of consumers strongly agree that the price of apparel has increased from a year ago, according to Monitor™ data, 53 percent are bothered that brands and retailers would substitute manmade fibers for cotton in their T-shirts.

Consumers have various reasons for their cotton preference. They say that compared to synthetics, it’s the most sustainable (84 percent), soft (81 percent), comfortable (80 percent), authentic (80 percent), trustworthy (79 percent), and durable (66 percent) according to Monitor™ data. And when they buy activewear, tech features are actually secondary to comfort (70 percent), fit (65 percent), quality (62 percent), durability (59 percent), washing clean (58 percent), and price (57 percent), according to the Cotton Incorporated Activewear Study.

While tech features might be secondary, consumers are interested in such characteristics. Compared to synthetics, consumers say they would likely purchase cotton activewear that has thermal warming (55 percent), is odor resistant (52 percent), and is antimicrobial or antibacterial (50 percent), according to Monitor™ data.

Cotton Incorporated offers two technologies that aid in moisture management: TransDRY® and WICKING WINDOWS™. A number of companies are using the technologies, including Under Armour (Charged Cotton), Eddie Bauer (FreeDry), and The North Face (FlashDRY).

When it comes to odors and bacteria, studies have shown it’s the apparel’s fiber that makes the difference.

A BBC series called “Trust Me, I’m A Doctor” looked at two studies — from the University of Alberta and the University of Ghent, that found synthetics become smellier after use than natural fibers. The show then ran its own experiment that involved cotton T-shirts, synthetic tees, and a spin cycle class. Afterward, two professors from the University of Manchester found up to 300 types of bacteria inhabiting the volunteers’ armpits. However, neither shirt absorbed these bacteria. Instead, a University of Alberta study showed cotton fibers absorb moisture, including smelly compounds produced by bacteria. This gets pulled into the fibers away from the wearers’ noses. But synthetic fibers don’t absorb moisture. They “hang on to the ‘oily soils’ from our sweat, which sit on the surface of the fibers, waiting to be guzzled by whatever odor-producing bacteria happen to come along.”

Dr. David Pascoe tests workout gear for Auburn University’s sports teams in his Thermal Lab. He feels there is only so much influence a garment can have on an athlete’s body temperature. In a Slate magazine article, he stated cotton is still a “very good fabric” for activewear. His assessment: cotton is lightweight, doesn’t irritate the skin, breathes well, can take repeated washings without deteriorating and is extremely cheap, especially compared to pricey performance apparel.

And if traditional cotton was paired with the latest performance technologies, makers might find the solution to discounting their activewear selection.