Customers might not be real retail merchandisers, but they like to play them online. At least when it comes to consumer reviews.

Whether effusive and positive or outright negative, shoppers are used to not only voicing their opinions, but also reading what others have to say before buying a product. While stores and brands might think, “Ugh,” over having to deal with another aspect of customer relations, the fact is these comments not only help to create a dialogue with shoppers, they can build brand loyalty.

Shelley E. Kohan, professor at the Fashion Institute of Technology in Manhattan, says consumers want to be a part of a brand’s business process. They want to contribute views and these days, they expect a two-way conversation. Responding to the comments/reviews in an authentic and appreciative way is key to building loyalty, she says.

“The immediacy of reviews has a significant impact on purchasing,” Kohan says. “The amount of reviews and average ratings can impact conversion across many categories resulting in increased orders from anywhere between 10-to-50 percent. The influence of online reviews will only grow in the coming years as Millennials and Gen Z are most influenced by peer reviews. As the demographic shift continues into the next five years and the Millennials take over the largest buying power, the relevancy of product reviews is critical.”

A study by PowerReviews and Northwestern University’s Medill IMC Spiegel Digital and Database Research Center concluded that ratings and reviews are a top factor impacting purchasing decisions, second only to price.

That’s in line with responses to Cotton Incorporated’s Lifestyle Monitor Survey, which reveals more than 3 in 4 consumers (78 percent) say clothing reviews are “very or somewhat believable”, and nearly 6 in 10 customers (59 percent) admitted they’re “very or somewhat” influential on their ultimate clothes buying decisions. 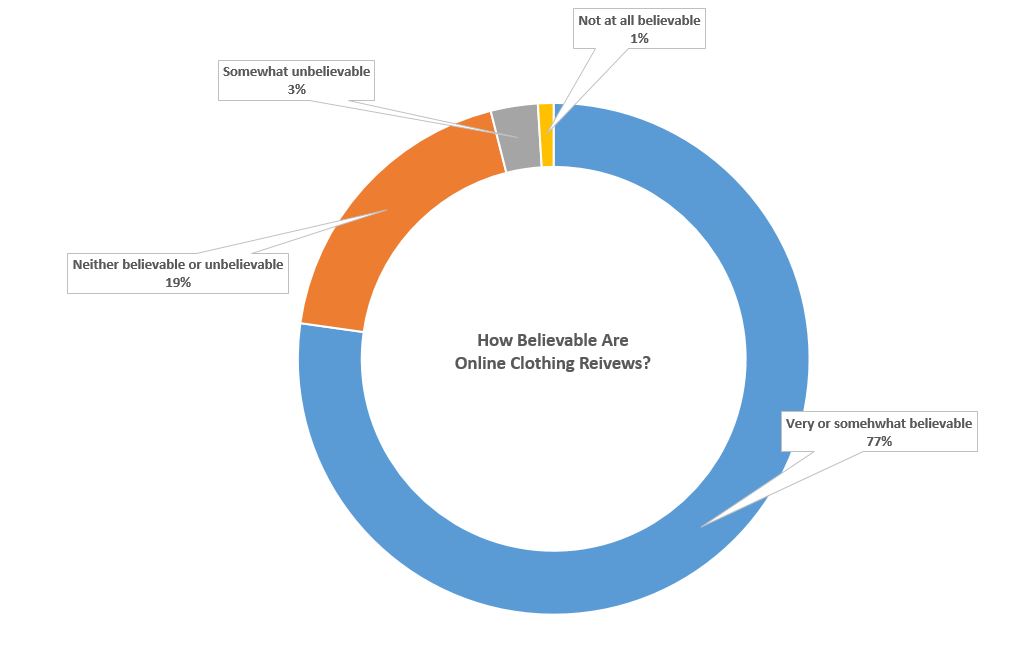 “People now trust peer reviews more than advertising, more than retailer claims, more than anything else,” she states. “The best retailers are not only noticing, but embracing them. They make it easy to submit and see the reviews near the products they sell. Nordstrom even embraced the way customers are ‘pinning’ items to Pinterest by showcasing special signs near those products in their stores.”

While everyone loves a positive review, the PowerReviews/Northwestern study found the majority of consumers (82 percent) seek out negative reviews because they show an authenticity that helps build trust — especially if the brand responds to the comment.

In 2015, Cotton Incorporated continued its Customer Comment Project, which involves analyzing more than 625,000 shopper comments available on about 40 key retailer websites for more than 60,000 adult apparel, children’s wear, home textile and intimate products. The Lifestyle Monitor survey found 2 in 3 consumers write product reviews for clothes, for both their online and in-store purchases. And about a third (34 percent) say they write them for “altruistic purposes,” like helping out others or letting them know about a product.

The Customer Comment Project found that whether it was from a fast-fashion, department or specialty store, consumers had some negative reactions to products that have historically been cotton rich, but are now made with higher percentages of synthetic fibers.

“I have worn [brand] jeans for over 20 years. These pants are not jeans,” said one woman who wrote on a department store’s site regarding a pair of cotton/poly/spandex denim. “They are some denim-colored, synthetic material that has too much elastic. …I’m having trouble finding any other brand that fits like [this brand] so I’m hopeful that they will, at some point, make a jean that is 99 percent cotton and 1 percent elastic again. Until then, I’ll just try to get more wear out of the pairs I have.”

And another comment registered a complaint about a synthetic dress from a fast-fashion retailer:

“Cheap and papery; would not recommend,” read the title. “The material is very cheap, ‘papery,’ stiff and holds static electricity. One of the poorest quality garments I’ve purchased from [brand]. If I had seen [it] at the store, I would not have taken a second look. However, the fit is flattering and colors are nice. Unfortunately, it’s such bad quality fabric that I returned it. I’d recommend viewing at the store before you decide to purchase.”

Kohan says it wasn’t too long ago that brands would wait until items did not sell before realizing there was a problem.

“Today’s reviews and feedback offer quick time information that can help brands quickly resolve problems or ride the waves of a hot trend,” she says. “Many companies understand that developing VOC (voice of the customer) programs helps brands build loyalty and a deeper connection with the consumer. If a brand rolls out VOC but then fails to action a response from that very program, they are opening themselves up to the worst customer reaction, which is when the customer takes their business elsewhere.”

“Feedback may otherwise go unknown, meaning customers may purchase something flawed and then not only tell everyone not to buy that product, but also not to shop with the retailer who sold it,” she says. “Providing feedback publicly allows future customers to understand the purchase before making a mistake, and allows retailers to change strategy quickly to avoid unnecessary bad word-of-mouth marketing and unhappy customers.

“Feedback is a way customers say they care, even if it’s poor feedback,” Walters adds. “The most forward-thinking retailers will work with customers and respond to reviews by both addressing the issues publicly and improving what they provide for customers.”