One of the cool things about brand logos is how, in a sea of packaged products, a simple symbol can tell consumers which company made a product at a glance. The right logo can say so much that scientists have found toddlers can recognize brands and logos before they can even read. And in the apparel business, one of the most successful logos is the Seal of Cotton. Half identifying tool and half touchstone to positive associations, the enduring graphic continues to connect consumers to cotton.

In the book, “Cotton’s Renaissance: A Study in Market Innovation,” authors Timothy Curtin Jacobson and George David Smith write that the Seal of Cotton, which was introduced in 1973, “Would become one of the most successful trademarks in the history of marketing. Unlike the wool mark, it was not a symbol but rather a picture and a word—’cotton.’ It needed no other caption.”

“The sophistication of the type integration with the friendly ‘poofiness’ of the cotton design is very engaging and seamless,” writes graphic designer Adam Ladd, of Ladd Design, who says the Seal of Cotton is one of his all-time favorites. “I can really say ‘all-time’ because I actually remember seeing this logo on tags in department stores as a kid and thinking how cool it was (way before I had any idea what graphic/logo design even was). Now, blending those original ‘cool’ vibes I got as a kid with the graphic achievements seen here today are easy….It’s memorable.”

Everything You Missed at Bluezone

Logo designer Jeff Fisher has said the Seal of Cotton is a favorite, “for its simplicity and integration of graphic and type elements.”

Today, the proliferation of icons in modern life make good design essential, but an enduring graphic also requires a function and meaning. App icons are functional identifiers offering convenient access to experiences: the challenge of a game; the dubious pleasure of social media; or the duty of the inescapable inbox. Brand logos may start out as a recognition tool, but evolve to telegraph a lifestyle, a philosophy, and most importantly, a mirror of consumer perceptions. 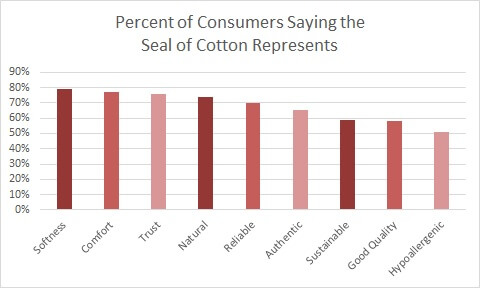 “In our consumer advertising, digital content, and social media, the Seal serves a standard purpose — to generate awareness,” explains Kim Kitchings, senior vice president of Consumer Marketing for Cotton Incorporated. “But in a retail space, online or in-store, it’s a tool that connects consumers with what research tells us they are looking for—cotton.”

The Seal of Cotton is licensed at no cost to companies that would like to display it on merchandise that contains cotton. It can be incorporated into a brand’s packaging materials, signs, hangtags and more. Some retailers, such as Jo-Ann Fabrics and Craft Stores, have been using the Seal on end caps to distinguish cotton-specific offerings. Large drugstore chains have used Seal of Cotton on shelf placards to segment cotton-containing nonwovens, such as feminine hygiene and baby care products, from non-cotton alternatives.

The Seal has a long history of inclusion on packaging, garment labels and in brick and mortar displays, but Kitchings is eying online retailers as an emerging and viable frontier. “Fiber content labels are not always easy to find on apparel in store, and that information can be more difficult to find when shopping on a mobile phone,” Kitchings reasons. “An icon like the Seal of Cotton visually telegraphs cotton content, as well as the halo effect of the Seal’s positive associations.” Cotton Incorporated successfully tested this theory through a cotton capsule collection with online fashion retailer Rue La La, last year.

The Seal of Cotton program has expanded over the years to accommodate different product categories and percentages of cotton used. This is another point in the Seal’s favor since the Lifestyle Monitor™ survey shows one in two consumers is less loyal to clothing brands than they were just a few years ago. Using the Seal of Cotton offers brands the opportunity to enhance sentiment and loyalty among customers, because about four in six consumers say that a brand that uses the Seal is more trustworthy (80 percent) and authentic (79 percent) than a brand that doesn’t use it. And nearly nine in 10 (89 percent) say the presence of the Seal of Cotton on products makes them “think more positively about the brand using it,” according to the Seal of Cotton study.

In a modern retail market, that kind of branding can truly be meaningful.