The old adage, “If you can’t beat ’em, join ’em,” may—to some extent—be surfacing in the denim world right now.

Denim makers are increasingly looking at the popularity of athleisure and trying to figure out how to make certain properties of the comfort category work for the jeanswear market.

“Our customers look for mobility, comfort, abrasion resistance and longevity in their products and our denim is no exception,” says Rachel Lincoln, manager, design services and innovation at prAna, a premium lifestyle apparel brand and retailer. “Our customers live a very active life, so our denim has to work from the trail to the tavern. They hike, climb, bike and play in our jeans.” 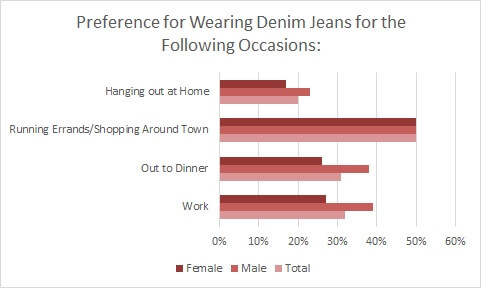 The NPD Group Inc.’s Consumer Tracking Service reports men’s and women’s U.S. denim jeans sales totaled $13.1 billion in 2015. That’s a 2 percent decline from the prior year, but a deceleration in the fall off, which was 4 percent in 2014. Meanwhile, the New York Times recently reported the athleisure market has reached $97 billion—despite being a relative newcomer to the fashion block.

In comparison, denim has been around since the country’s gold rush days—1873, to be precise—when Levi Strauss and Jacob Davis got the U.S. patent for riveted denim work pants. After all these years, Levi isn’t about to cede the floor. Rather, it’s embarking on innovative concepts like partnering with Google on the tech company’s new Project Jacquard, a program that “weaves touch and gesture interactivity into any textile using standard industrial looms.”

Levi’s and Google ATAP (Advanced Technology and Projects group) joined forces to create the Commuter Trucker Jacket. The jacket, which has Google’s Jacquard technology woven in, will be available spring 2017. The jacket was designed with urban cyclists in mind. Its interactive denim fibers allow wearers to leave their smartphone in the jacket pocket, while maintaining control of, say, their music, phone calls, and maps simply by tapping a smart tag on the jacket sleeve. When the tag is removed, the jacket is completely washable and as durable as regular Levi’s denim.

While Levi’s regularly trades on its authenticity and heritage, brand president James Curleigh likes to say that to be successful, “You need to protect your core and go for more.”

Levi’s is a top pick among consumers, giving the company leeway to experiment with out-of-the-box product offerings. Nearly one in four consumers (22 percent) say they buy Levi’s denim most often, followed by Wrangler (8 percent), Lee (6 percent), and American Eagle (3 percent), according to Monitor data.

“The denim industry continues to be wildly competitive and is so widespread with such strong roots that I don’t believe it will ever be threatened by athleisure, wherever that trend may go,” she says. “I often wonder though, how far the denim industry’s answer to it will go, but it seems to still be rolling full speed ahead with no signs of slowing down. I enjoy seeing new brands come up with their own new fabric blends to stay competitive.”

Ober points to shape retention and full-motion fabric as athleisure qualities that are being adopted by denim makers. This makes sense as the majority of consumers say fit (75 percent) and comfort (70 percent) are the top factors in the denim purchasing decision, according to the Monitor data. These are followed by “a flattering look” (65 percent), price (59 percent), quality (56 percent), and durability (53 percent).

“James Jeans came out with the Twiggy Dancer, Mavi with their Feather line, Diesel with Actyvista, AYR with their Flex Tech Jean, 7 For All Mankind with Slim Illusion Luxe, AG with the Contour 360, and J Brand with Hi Def Stretch. These are just are a few examples,” she says, ticking off a list of active-inspired offerings. “The Diesel and AYR jeans are actually made to look like workout leggings.”

prAna’s Axiom jean is a traditional five-pocket model with a bit of stretch for mobility and a gusseted inseam for range of motion. The company also has a companion jean that offers abrasion resistance as well as freedom of movement.

“Our customer is fairly traditional, but loves that we here at prAna are researching cutting edge innovations and ensuring that we will introduce new ideas such as wearable technology in the right products at the right times,” Lincoln says. “Life is fast, and people need clothes that they can live life in without worrying if the product will function or be appropriate. Our goal is to offer styles that work for them, wherever they are. prAna has focused in on three key attributes: versatile design, adventurous spirit and human touch. Each product has to consider these three guides in order to be the right style for our collection and ultimately our brand.”