“We get texts and emails from the stores,” says Rachel.

This is typical of today’s young consumers. Tweens, who range in age from 8 to 12, and teens command $75 billion of discretionary spending, according to Piper Jaffray’s Spring 2015 Teen Survey. But they’re also value conscious.

“Teens want brands and hot products, but they’re so agile online they know how to find or wait for the discount,” says Strategic Mindshare’s Cynthia Cohen, founder and president. “They know how to enter a product on a site that tells them when it will go on sale. Or they play games to win a discount. As much as parents want to save — because they’re paying for everything from tutors and lessons to the big college bills — the kids know how to do it better than anybody else.”

The majority of teens (57 percent) shop for apparel on sale, according to the Cotton Incorporated Lifestyle Monitor™ Survey. While 40 percent buy their clothes on impulse, which is higher than the average consumer (33 percent), fully 60 percent plan their purchases. According to the Lifestyle Monitor™ Survey, 3 in 4 teens prefer their clothes to be cotton-rich, and nearly 3 in 4 (73 percent) say better quality garments are made from natural fibers like cotton.

Some experts say teens and tweens became more money conscious because post-recession parents cut back on household spending or because fewer jobs were available to teens themselves. But Cohen says teens are decreasing the amount they spend on apparel for other reasons.

“If teens save money on their apparel, they can spend more on other things,” she says. “A young teen female might wear a cheap top from Forever 21 with a Louis Vuitton bag. Teens can also buy more electronics, pay their cell phone bill, spend more on entertainment or a night out.”

This means teen apparel stores are likely to discount more often. ShopperTrak’s Bill Martin, founder, says he expects teen apparel retailer’s to discount their offerings 5-to-10 percent more this Back-to-School season than a year ago.

That would be welcome news to the Wronko twins’ mother.

“I do look for [a good] price because I have three children and they’re all girls and I look for quality,” she says. “But I also look for style because sometimes the styles are a little too old for their age. There are times I tell them, ‘Uh, I don’t think so,’ because I think it’s a little too provocative.” 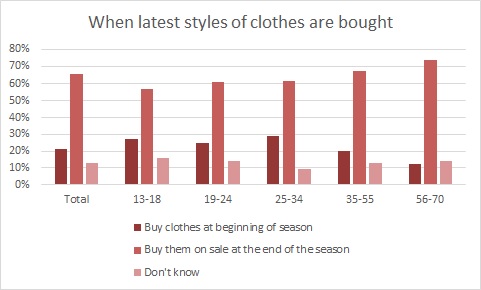 Abercrombie & Fitch is one of the stores that used sexualized marketing to promote its product. This past spring, A&F announced it was terminating the use of scantily clad models and suggestive marketing. And in a move to be more inclusive, the company said nearly two years ago that it would add plus-sizes online, although larger sizes aren’t offered on every item or highlighted with a category link on the A&F site.

Sales were also down for American Apparel, which reported a second quarter decrease of 17.2 percent, leading the company to state it might be headed for closure. And Aeropostale reported net sales decreased 17 percent, although the company held a better outlook for the third quarter.

Cohen says the standard teen industry players have had market share taken due to the influx of international brands like Uniqlo, Topshop, Joe Fresh, and online retailer ASOS, not to mention fast fashion giants H&M and Forever 21. She adds that online stores are cannibalizing brick and mortar because teens find the ecommerce discounts or cherry pick items from one site to the next, rather than buy multiple items from one store.

“Cherry pickers go online and shop a variety of stores because they didn’t have to park the car and walk three blocks,” Cohen states. “They’re also not in store picking up other items.”

On average, teens spend about $65 on apparel each month, according to the Lifestyle Monitor™ data. Teens buy most of their clothes at chain stores (20 percent), mass merchants, specialty stores (19 percent), and department stores (13 percent). While specialty stores remain a top channel, teen shopping at these venues has declined from 27 percent in 2010.
Cohen says retailers will have to work hard to keep up with today’s plugged in, digitally savvy teens and tweens.

“Stores need to work on their ecommerce — especially, social media commerce. That’s growing significantly and kids live on social,” Cohen says. “Retailers should look at stores within stores, like how we see Topshop in Nordstrom. Or limited-time, in-store pop ups. Or pop ups like Target did in Bryant Park for the Lilly Pulitzer collaboration. Retailers need to be exciting to grab the younger consumer’s attention. Right now, the world of social media, all the digital technologies and the small screens are making geriatric and boomer retailers scramble — fast.”