Large companies aren’t generally known for their sustainability, but Levi Strauss & Co. is changing precedents with their push to reduce the environmental impact of their denim. Levi’s announced that is has saved 1 billion liters of water since 2011 and the launch of its Water<Less process. The process reduces water use in garment finishing by up to 96 percent.

Levi’s is simultaneously releasing a new Product Lifecycle Assessment (LCA), an update to a 2007 study that examined the environmental impact of their products. This study gives a more in-depth examination of the impacts of cotton in key growing regions, in apparel production and distribution, and in consumer washing and drying habits.

The study shows that of the 3,800 liters of water used throughout the lifetime of a pair of jeans, cotton cultivation (68 percent) and consumer use (23 percent) have the most significant impact. Consumer care also accounts for the highest climate impact, representing 37 percent of the 33.4 kilograms of carbon dioxide emitted during the lifecycle of a pair of jeans. 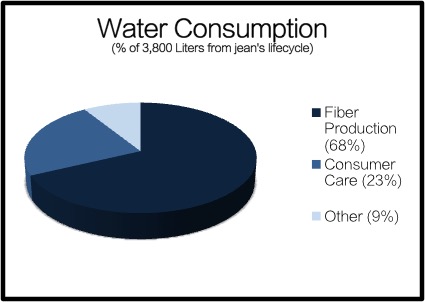 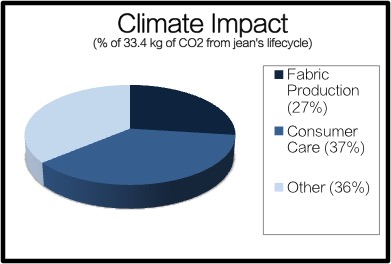 The study includes data from some of the world’s top cotton-producing countries, including the United States, China, Brazil, India, Pakistan and Australia. It also examines data on consumer care in new markets, including China, France and the U.K. to compare differences in washing habits.

To reduce the impact of their cotton consumption, Levi’s is working with the Better Cotton Initiative (BCI) to train farmers to grow cotton with less water. According to BCI data, in 2013, cotton farmers in China using BCI techniques reduced their water use by 23 percent compared to other farmers. Levi’s plans to work toward sourcing approximately 75 percent Better Cotton by 2020, from 6 percent today. By this date they also intend to expand the Water<Less process outside of denim to 80 percent of products, up from the nearly 25 percent today.

The new LCA reveals that Americans use more water and energy to wash their jeans than consumers in China, France, and the U.K. Consumers in China wear their jeans, on average, four times before washing them, resulting in a 50 percent lower impact. Levi’s is launching an online quiz, “Are You Ready to Come Clean?” on their site to expose environmental impact. The quiz will allow consumers to find out the amount of water and energy they use compared to other countries.

Chip Bergh, CEO and president of Levi’s, said, “By engaging and educating consumers, we can fundamentally change the environmental impact of apparel and, ideally, how consumers think about the clothes they wear every day.”