Denim’s role in political movements is unmatched with any other fabric. For nearly a century, workers, protesters, rebels and “common people” alike have chosen denim as a revolution uniform.

Levi’s latest collaboration with artist, designer and political organizer Fresco Steez taps into the material’s long political history in honor of Black History Month. Steez designed a collection of 10 graphics that pay homage to Black political movements throughout history and those who led the charge.

According to Steez, whose activism stretches back to the age of 14, the artwork is meant to honor the past and help build a better future for the Black community.

“I wanted to draw on political history for this collection, and I want people to see, even down to the typeface used, the subtle references to different political struggles,” she said. “I wanted to illustrate Levi’s being a part of this political history, and to illustrate to folks who love Levi’s as much as I do that we’re not just talking about Black history, we’re talking about Black futures. The future that we are moving towards is in a long tradition of Black people building power in uprising and political struggle.” 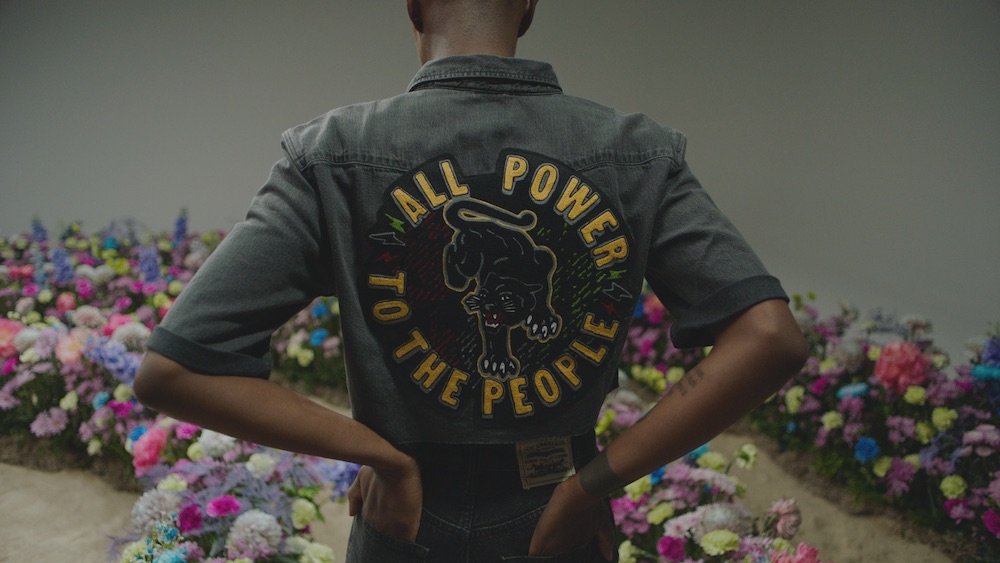 Several graphics feature Steez’ interpretation of the official black panther graphic originally designed by the Black Panther Party’s minister of culture Emory Douglas during the political movements of the ’60s. Other graphics depict a Pan-African flag beneath the phrase “Black Lives Matter,” and a raised fist rising from roses accompanied by the phrase, “It is our duty to fight for our freedom.”

Imagery also includes an earth with the words “Black women are inherently valuable” written over it, and another with the words “Stonewall is Black History” in reference to the Stonewall rebellion connected to LGBTQI+ rights. Other graphics feature the words “Power,” “Black Joy,” “Culture” and “Freedom” over a spread of roses.

Artwork is now available both online and in-store at Levi’s Tailor Shops, in a mix of patches, chain stitching, and direct-to-garment printing. It can be featured on T-shirts, sweatshirts and tote bags for men, women and kids, with retail prices ranging from $17-$70.

Along with the collection, Levi’s is making a donation to Power U, which works with Black and Brown working-class youth on combatting current social and healthcare issues.

The collaboration fits in with Levi’s latest campaign which celebrates the “beauty of becoming” and features a series of creatives celebrating themes such as racial, gender, and sexual equality, climate action, and empowering people with disabilities. The campaign kicks off this month with a focus on Black history.