What does denim look like through the lens of Noorism Founder Noor Zakka? Whimsical, vintage, original and sustainable.

Launched in 2015, the Brooklyn-based brand is a part of the new pioneering Made in USA movement that embraces circularity and provides denim with a second life. Zakka upcycles re-claimed denim to create one-of-a-kind apparel and accessories, each with their own unique story to share. Over the past two years, Noorism has gained momentum in the Made in USA space with its mission to reduce clothing pollution through sustainable design.

“I founded Noorism after being disheartened by the volume of poorly-made, practically disposable clothes produced by the fashion industry each year,” Zakka said. “I realized that while vintage denim was gaining traction, there were not a lot of people doing a whole collection using reclaimed jeans.” 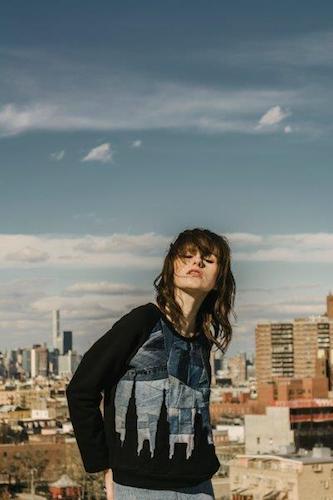 Having designed for Ellen Tracy, Tahari and Zac Posen, Zakka went on her own to establish Noorism. Since launching Noorism’s small first collection of two upcycled denim hats, she has grown her eco-friendly inventory to include reclaimed denim outerwear, accessories and wrap skirts that retail from $92 to $750. Each of Noorism’s items are developed with recycled vintage denim and contain black top stitch detail.

The brand’s greener presence is fortified by its domestic supply chain. Noorism currently works with U.S.-based manufacturers that are willing to produce small quantities. For trims, Zakka works with companies based in New York City’s garment district, including Buttonology, Guide Fabrics and Mood Fabrics. With most of its production cycle taking place in New York City, Noorism can keep its denim production local and have resources within a five to ten-mile radius.

“Made in USA means that the products are local and that they were not made in a sweatshop. It also costs more to produce because labor costs are higher, especially in New York, so it’s definitely part of the story and part of the experience,” Zakka said. “I love making clothes in New York because the whole process can be done from start to finish.”

Report: Potential for Recycling Textiles in Europe Is Huge

For Spring ’18, Zakka is planning re-imagined classic denim styles. While prominent denim trends like colorblocking and patchwork continue to drive denim fashion, Zakka is adding her own sustainable spin to the upcoming collection. Using leftover scraps, Zakka says the new line will feature allover patchwork fabric for a unique, eco-friendly look. Another new style in the works will incorporate mosaics, which will be inserted to the back of classic jean jackets to show iconic landmarks, including the Brooklyn Bridge.

In addition to her upcoming Spring ’18 collection, Zakka aims to further reduce the industry’s carbon footprint. She said that consumers choosing to make more eco-conscious decisions, coupled with a nationwide effort of minimizing production overseas, could support the ongoing Made in USA ethos.

“People are more aware of where their clothing and food comes from these days. They want to know the story behind the product and that is part of their experience in buying it and owning it,” Zakka said. “I think anything that levels the playing field in terms of cost to produce will be helpful, but the difference between making something in New York or making something in a place like Indonesia for example will be hard to level out until those less expensive areas start becoming more expensive.”