Think about how much you have in the bank right now. Could you use 51 percent more? Seriously, for every $1, you’d now have $1.51.

That could have been your reality if you’d taken my advice three years ago to short the retail sector.

If you saw the movie The Big Short, I’m Michael Burry (Christian Bale’s character), trying to get everyone to see the implosion on the horizon. Burry knew the housing bubble was going to burst, but when he warned people, he was met with glib remarks like, “No one can see a bubble. That’s what makes it a bubble.”

People like to call me a pessimist or a sensationalist but I see a lot of similarities between the housing market and the apparel/retail sector. I have been calling the demise of traditional retail for years, but it wasn’t until I saw The Big Short that I thought I could relate my feelings with something culturally relevant and make boards, shareholders, CEOs and Wall Street see my perspective. Unfortunately, like Burry, no one really wanted to listen to me.

Now I must be honest, I am not a trader by profession. My understanding of the financial markets extends as far as my economics degree from NYU and my day-to-day Scottrade account.

But what I do know is supply chain. And in my opinion, the supply chain is the eyes into a brand’s soul.

Traveling around the world to major sourcing hubs three to five times a year has provided me a few key takeaways: brands were buying less inventory and committing later, they’re trying to buy the same type of product year over year for less money, and the cost of doing business at the factory level was only increasing. This is not a recipe for success. Couple that with declining store traffic, a plethora of new direct-to-consumer startups and a change in consumer spending patterns, and I saw a bubble.

The industry is trying everything, including rapid company turnovers, changes in sourcing matrices, massive layoffs, demands for huge price reductions at the factory level, and a general scramble to mimic the Zara model. They are all just red flags.

Now it’s probably not fair to compare housing to retail. But what if just one hedge fund would have returned my call or taken my advice? I would not only have been right, I would have made my investors a fortune, just like Burry did (though not without a fight).

Analysts like to say retail is cyclical, that we will come out of this cycle, but post-recession I think that the only trend we have seen is down.

I have spoken at conferences, written articles and even been quoted about how, if I had the financial wherewithal, I would short the entire retail (and apparel) sector. With the exception of the off-price players, a few athletic wear brands and a couple of children’s players, I would have taken every single retail and brand stock, put it into a fund and shorted it.

When you read about store closures or a bankruptcy it seems bad, but this chart highlights the extent of this retail bubble over the past three years. 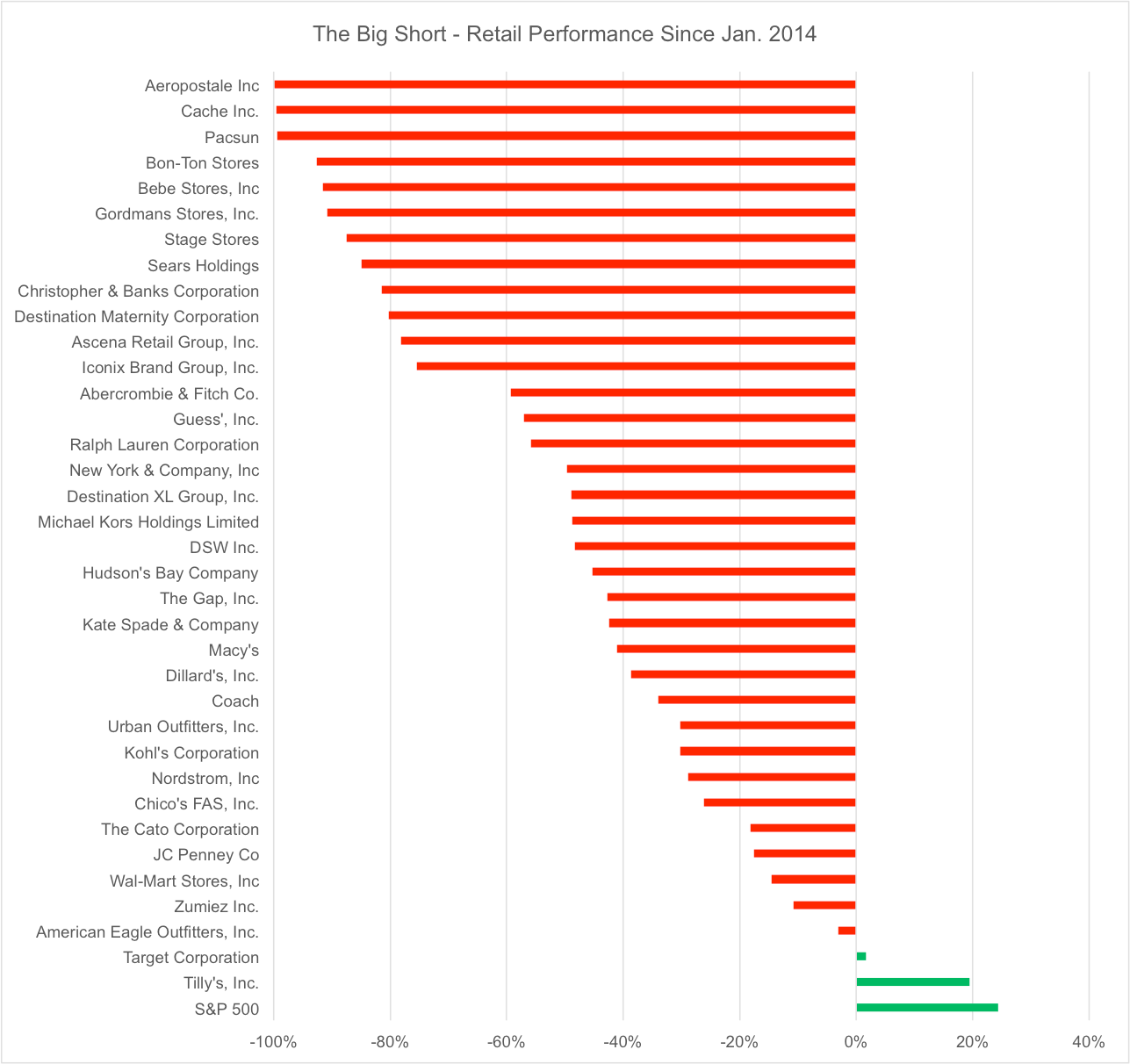 When you take 39 stocks and 37 are down, (with the other two rather insignificant), you have a notable pattern. They say a picture is worth a thousand words. Well, this chart represents hundreds of millions of them to me. Just take a minute, go line by line and see what 36 months did to our industry. Brands ripe with legacy are either gone or near extinction.

How many of your traders returned 51 percent on an investment?

But here’s the worst part of this tale: we haven’t reached the bottom yet.

Some easy money may have been made, but forget the market for a moment. Many of these 39 retailers and brands will not be in existence in five years. In the next decade—maybe less—fewer than 10 will exist, and those that do will look much different.

Factory capacity continues to widen, which is a scary indication that brands aren’t buying (and neither are consumers). Now, while I may not be so fond of the conventional retail model, one thing is for sure: people won’t start going without clothes. Just like the iPod and Pandora replaced the Walkman and Tower Records, there’s a new generation of brands that will revolutionize retail and change the landscape we think we know today. Will you be on the right side of history?

There are certain companies we assume are immune to change, but when Macy’s and Ralph Lauren start to buckle, it could be a sign of a bubble about to burst.