“In any other company, the CEO doesn’t rebuild the sewing machine.”

Working out of a workshop in Oakland, Calif., Slaper said that Roy doesn’t even feel like a business. “I guess that the way I’d describe it is this is just my life,” he said.

When Slaper started making jeans, he also had a day job working in a metal shop and would sew at night and during the weekend. He started by making jeans for his friends and himself before starting e-commerce in 2010.

Slaper said he didn’t really know anything about jeans before he decided to start sewing them, he just thought that they sounded like the easiest thing to work with. Luckily, he met someone from Cone early on who showed him the fabrics and talked to him about the business.

“It’s one of those things where you can learn a lot by having a pleasant conversation with someone,” Slaper said. “Then they say something, and you think, gosh I don’t even know what that means, and then you look it up later.”

Slaper latched on to the details of fabrics and sewing, and his garments include endless tiny details that appeal to the people who really know a lot about jeans. The denim enthusiasts are the ones who have really attached to the brand. “The faddists don’t seem to be into it, because it’s not shiny and sparkly,” he said.

Up until now, Slaper has been making new styles of jeans without much repetition or a sense of perennial favorites. He said that when you are running a boutique business, a run is about 150 pairs, and even a relatively unpopular jean is likely to sell out. Slaper says he is trying to change this.

He is now trying to zone in on a couple, more repeatable styles that don’t pendulum swing. “People always say fashion is a reaction, so you don’t want to be at one end of the reaction,” Slaper pointed out. Wide leg and skinny jeans are not forever. 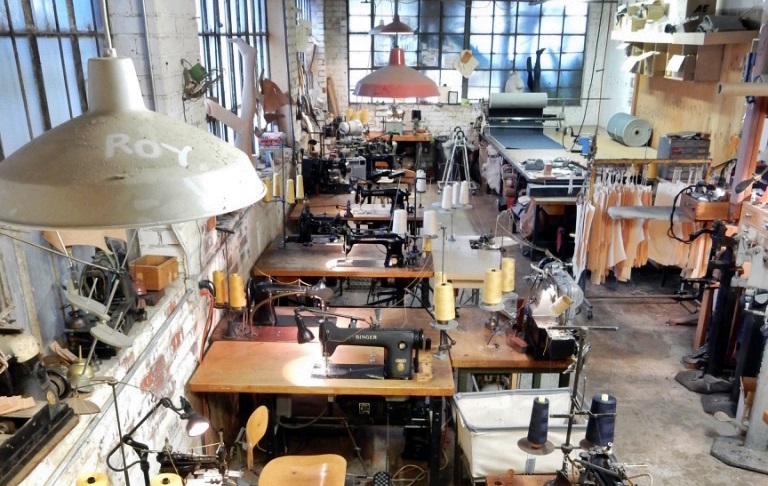 This shift to more consistent styles goes along with the move of Roy from physical to online retailing. Until recently, the brand was sold almost exclusively by Self Edge, but now Slaper is trying something new with branded e-commerce.

“Using a retailer for all those years was really good for me because I was forced to improve,” he said. “I was under pressure to make new styles that I wouldn’t have otherwise made.”

On top of that, there is the appeal of being paid for an entire batch at once, which then frees up the time for new development. On the other hand, wholesaling was a lot of work and physical stress. The switch to e-commerce will mean things get a little tighter, and he will produce smaller batches.

Despite the difficulties of running a one-man operation, Slaper prefers it this way. He says he has seen the success traps other people fall into, thinking hype is sustainable. “You see them fall flat on their face because they try to scale up, and they lose the whole essence of what they had in the first place.”

Just because you’ve had success on a denim forum doesn’t mean that you can become Goldschmied, he pointed out.

Slaper is not entirely sure of who his customer base even consists of, and he’s not interested in growing a massive following. “My whole approach to the thing is just to go ahead and be myself and do my thing and hope that is resonates with someone,” he said.