Trinidad Garcia III, the founder of L.A. denim brand Trinidad3, followed in his father’s and grandfather’s footsteps when he joined the U.S. military as a part of the marine infantry—but that wasn’t the only thing on his mind when he first talked with Navy recruiters.

“When I first joined the Marine Corps, the recruiter showed me a book that had all of the military friendly schools that accepted the G.I. bill,” Garcia recalled. “On there, I saw the Fashion Institute of Design and Merchandise.”

A former screen-printer and lifelong fashion fan, Garcia asked his recruiter, Sergeant Luke, if it was true that he would be able to attend the school if he served in the Marine infantry.

Garcia said no more about the school to the sergeant but he kept it in the back of his mind throughout his service. When the time came and Garcia was deployed to a nearby base, he finally put the recruiter’s words to the test and applied.

Now, he has three fashion degrees and his own fashion brand.

Today, Garcia works as a marksmanship instructor with the US Navy in the morning, and in the afternoon, he spends his time at an apparel factory designing and building Trinidad3. Garcia says his military experience, even outside of his desire to work in fashion, has shaped his line and will continue to shape it in the future.

“The experiences seep out into the collection,” he said. “When you’re in the military, things have to make sense. There are pockets there for a reason. Every garment you are wearing, it has to do something for you.” 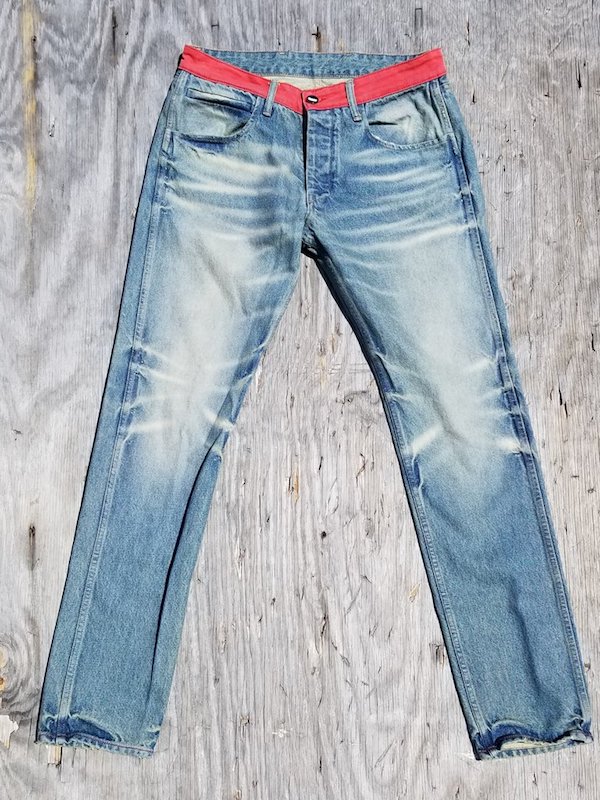 Evidence of this mentality manifests in the welt pocket Trinidad3 builds into every pair of its jeans and denim jackets, including a US Navy WWII-inspired model. But, Garcia’s signature element is the red waistband around his Trinidad3 jeans. As with everything else he does, there is a purpose to this.

“In the Marine Corps dress blues, there’s a red tuxedo stripe that comes down the legs of the trousers. Now, you earn that when pick up the rank of corporal. It’s called the blood stripe,” Garcia explained. It’s a reminder to myself and others to pay respect to those who have shed blood for our country.”

Where there is meaning in Trinidad3 jeans, there is also craftsmanship. Garcia’s jeans are built to last, a kind of “future vintage.” He designs every pair of jeans to be able to take whatever punishment that its wearer may encounter.

“If you really dissect the jean, we’re doing flat felt stitch all the way through,” he said. “The very little overlock I use is on the interior side pocket of my selvedge jeans but I put binding over it to secure it.”

Even with all of the practicality Garcia infuses into his jeans, there is always an element of class or dignity, or what Garcia calls “rugged sophistication.” Though areas of the jeans are frayed or worn, the denim still holds together and performs admirably. Through this, Garcia is trying to replicate his favorite aspect of military uniform style.

Garcia recalled a moment from his deployment days when his team of service members completed a days-long patrol only to be tasked with attending a military ball mere hours after they returned from the field haggard and unshowered.

“These dirty, nasty-looking marines all [of a] sudden get dressed up. You’d never know those guys were infantry guys,” he said. “That contrast, you see that in the collection. There will be pieces that are stone-washed, with breakage but there’s still that refinement.”

Garcia’s search for meaning through fashion is still his primary goal, day-to-day. For instance, he’s highly aware of the perils military veterans face when making the transition back to civilian life and his brand, in many ways, is designed to cater to the returning service member. Garcia admits that his own transition was difficult, despite having a vision for what he wanted to do once back at home. Midway through his education at the Fashion Institute of Design and Merchandise, Garcia hit what he called “the wall” and was only helped back up by a military veteran community at the Institute, a community he helped to create.

“It’s a daily fight. You have to find something that you are passionate about and just go for it. I interviewed for several companies and I turned down several jobs because I just didn’t feel like I fit in,” Garcia admitted. “It doesn’t matter what you did. In the military, you go through hardships. Over time, you pick up rank and respect and you become somebody important in that realm. Then you come out and nobody cares.”

Garcia said the brand’s next collection, which is now in development, will be inspired by prisoners of war from WWII. Currently, Trinidad3 can be found at Lepopup 1108 on Abbot Kinney Boulevard in Los Angeles.