What are the pains and actions brands across the industry are taking to try and become consumer-led? Join our webinar "Consumer-Led Retail: Optimizing Assortments at Speed" Sept 28th, featuring experts from MakerSights and DTC brand Taylor Stitch.

Los Angeles in the late ’60s is brought to life in director Quentin Tarantino’s new film Once Upon a Time … in Hollywood—including the decade’s iconic denim fashion.

In the film, which chronicles three days in the life of fading TV star Rick Dalton (played by Leonardo DiCaprio) and his stunt double buddy Cliff Booth (played by Brad Pitt), costume designer Arianna Phillips recreates the swinging style of Hollywood starlets and the free-spirited look of L.A. bohemians with vintage cut-off shorts and bell bottom jeans. And one garment in particular—the Wrangler jacket worn by Pitt’s character—nabs a lot of screen time.

Rivet: What can you tell us about the vintage Wrangler jacket Brad Pitt’s character Rick Dalton wears in Once Upon a Time … in Hollywood?

Vivian Rivetti: Created for rodeo riders and ranch hands, adopted by rebels and rock stars, the authentic 24MJZ men’s jacket that Brad Pitt is wearing is the definitive denim jacket. This specific model, unique in Wrangler’s history, was produced in selvedge left hand twill before the brand launched its broken twill innovation in 1964.

In the 1960s, denim became synonymous with the youth culture phenomenon and a spirit of rebellion, and by the 1970s, Wrangler’s 124MJ jacket emerged as the archetypal jean jacket. Though it was launched in the mid-sixties, you can trace elements of it back to earlier jackets from the late forties, which had complex constructions and zipper fronts.

This jacket has been worn with swagger throughout the years, and it has a sensibility that makes it a desirable item that truly evokes our cowboy cool spirit. Steve McQueen wore it, buttoned up and collar popped, to evoke rebel style, while John Lennon took a more bohemian approach, wearing it open over shirt or sweater. 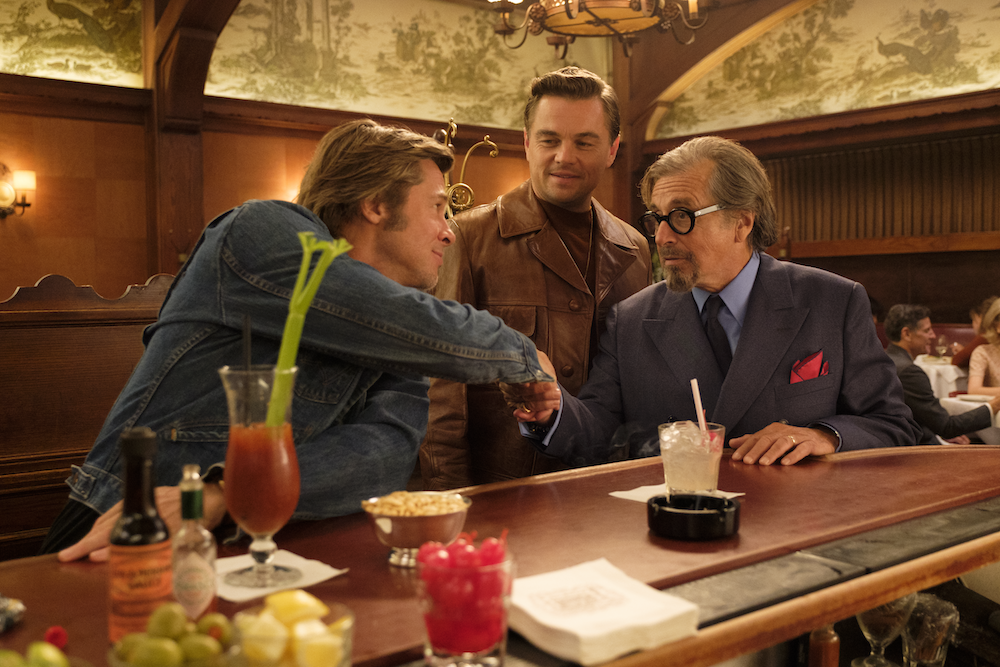 Leonardo DiCaprio, Brad Pitt and Al Pacino in Once Upon a Time…in Hollywood

Rivet: Does Wrangler have the 24MJZ (or something) similar in the current collection?

VR: You can find similar pieces to Pitt’s on our website now from our Icons collection, which we are extremely proud of as a representation of and testament to the iconic pieces worn by music and entertainment legends in past. We have our key icons—jeans, shirts and jackets—which we truly wanted to honor as they have lived through the eras of Wrangler and are still worn by icons today.

With multiple color options, the Icons men’s denim jacket features iconic details such as the W pocket stitching, rounded pocket flaps and copper buttons that are faithful to the original. We slimmed the sleeves a little and lengthened the body, but otherwise the proportions have remained the same, as has the positioning of the heritage tobacco stitching on Wrangler’s revolutionary broken twill denim. The design is timeless, and the reissue is virtually unchanged.

Rivet: What does it mean for Wrangler to be featured in films?

VR: Since 1947, we’ve been proud to work with some of the most influential musicians, artists and actors in the world. Seeing our products on the big screen has always been a thrill for Wrangler—at the end of the day, it’s authentic and genuinely cool. The brand was very present and visible in the ’60s and we were truly a part of the lifestyle and changing ways of dressing. Once Upon a Time … in Hollywood brings the era alive as authentically as possible, creating the emotional and nostalgic vibe that the era and our brand evokes.

Wrangler Brings Jeans Made with Infinna Fiber to European Market

Paris Retail District Vertbois Hopes to Become the Next Williamsburg

Why ESPN Can Afford to Sit Out the Sportsbook Ad Frenzy

‘Fire on the Plain’ Review: Rising Talent Burns Up the Screen in Gutsy, Gorgeous Chinese Noir