Like jazz, the blue jean is an American original with global appeal. And like that uniquely American musical genre, the totality of what we call blue jeans is filled with themes and variations that will create by some projections $130 billion in sales by 2021. To get a sense of where, why, and even when denim is popular around the world, Cotton Incorporated conducted a global consumer survey in conjunction with Cotton Council International. The responses from the eleven countries reveal insights and identify what might be surprising geographic pockets for the five-pocket staple known as blue jeans, and point to elements that will influence denim’s evolution as an apparel category.

Globally, consumers own an average of 5.4 pairs of blue jeans. It would be natural to expect that the United States would boast the highest per capita ownership, given its seasonal temperatures and the fact that it is the birthplace of blue jeans. However, warmer and more humid climates are where denim enjoys greatest ownership and frequency of wear. 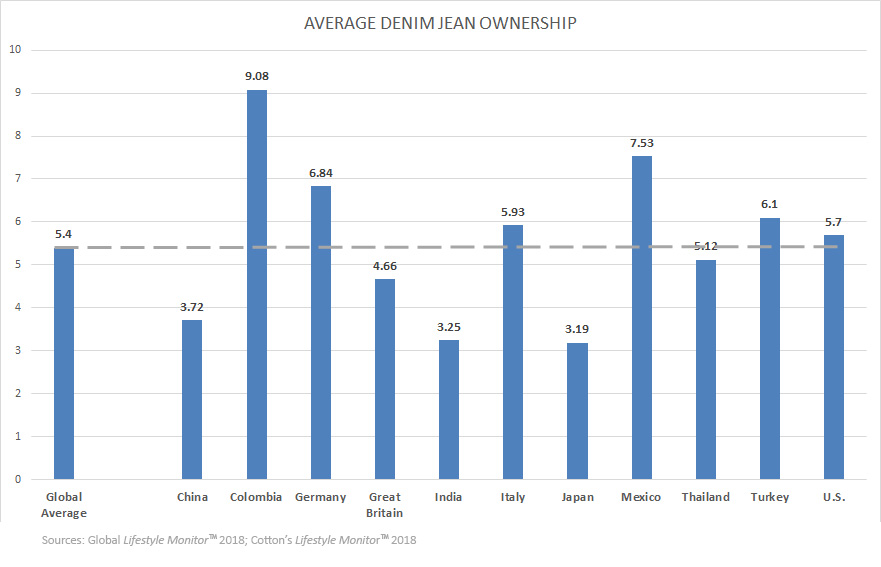 In Colombia, for example, consumers own an average of nine pairs of blue jeans, the highest in the survey. This is followed by Colombia’s neighbor to the north, Mexico, with more than seven pairs per person. Germany, an outlier in the hot or humid denim zoning, comes in third for ownership with 6.84 pairs per person. Turkey and Thailand come in fourth and fifth, with an average of 6.10 and 5.12 pairs per person, respectively.

Respondents from China, India and Japan claimed the smallest ownership of denim jeans—an average of 3.72, 3.25, and 3.19, respectively. The smaller-than-average ownership may reflect comparatively smaller wardrobes, overall; especially with respect to China and India where apparel storage capacity is more limited than in other parts of the world. 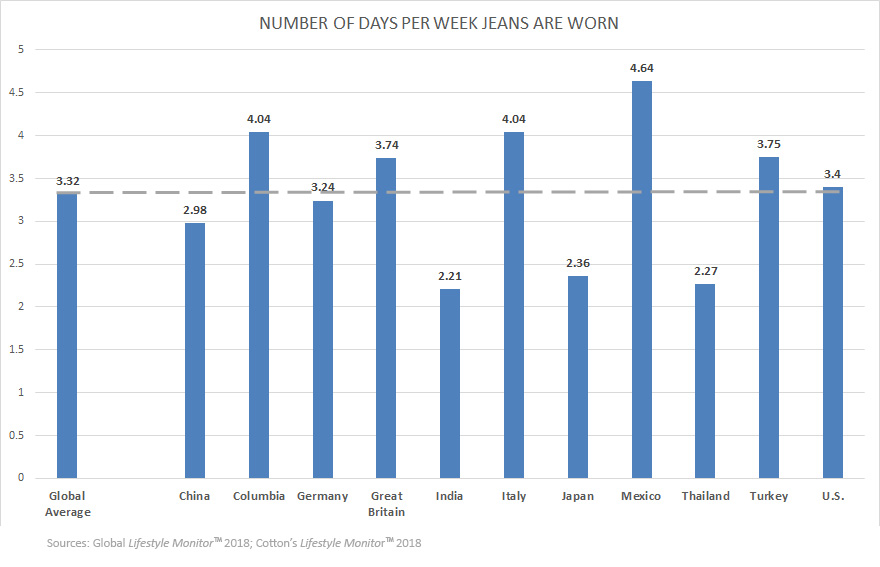 Where do these global consumers wear their denim? This varies by geography and culture, of course, but 35 percent of total respondents cited denim as doable for work, particularly in Mexico (48.5 percent), Italy (45.5 percent) and Turkey (41 percent).  For a dinner out, jeans ranked highly among respondents from Germany (52 percent), Colombia (42.7 percent) and Thailand (41.3 percent).

The joy of jeans 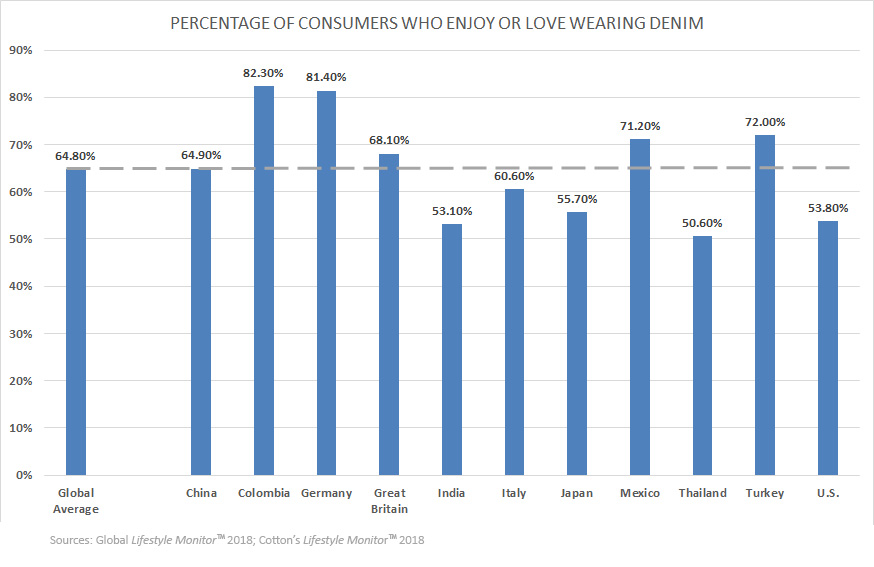 The comparatively small denim ownership of respondents from China (3.72 pairs) does not suggest apathy towards the category. On the contrary, more than 60 percent of Chinese respondents agreed that they loved wearing denim on a regular basis. The Chinese enthusiasm for blue jeans falls just behind that of Germans (66 percent) and Colombians (63.3 percent).

The good news for jeans-related businesses is that around the world, consumers love or enjoy wearing denim. Not surprisingly, the number of respondents claiming to love or enjoy wearing denim is highest among Colombians (82.3 percent) and Germans (81.4 percent), the countries with the highest jean ownership. Respondents from Thailand (50.6 percent) and India (53.1 percent) represent the lower end of the denim popularity scale.

An expanded series of questions for U.S. consumers, representing the largest economy, point to the future of consumer demand and category opportunity. Most Americans (87 percent) would pay more for a pair of jeans that fit them ‘perfectly.’  While engineering a pair of jeans with a universally perfect fit may prove elusive, comfort emerged in the survey as a key denim purchase driver for 97 percent of Americans. Since authentic denim is 100 percent or predominantly cotton, there is a comfort component built-in.

Performance for the win

Results of the survey point to cotton as key to the continuing popularity of the denim category. Perhaps buoyed by a general consumer trend towards authenticity, more than three-quarters of American respondents (76 percent) cited cotton content as important to their decision to buy a particular pair of jeans. That said, 84 percent of American respondents cited stretch in their denim as a purchase driver, with 63 percent claiming that they would pay more for a pair of jeans that were made predominantly from cotton, but with some stretch.

Stretch as a feature of consumer denim preferences is both directional and cautionary. During the run-up of raw cotton prices in 2011, some manufacturers and brands began diluting denim with synthetics to keep costs down, or to showcase novelty fibers for higher price point denim. A study of consumer reviews for these products showed that depending on the ratio of synthetics or novelty cellulosic fibers to cotton, the jeans performed poorly. While some of the products rightly boasted a soft hand, without the structural integrity of cotton fibers, the garments had poor shape retention and durability, features important to 69 percent and 79 percent, respectively, of U.S. respondents.

Sixty-seven percent of U.S. respondents claimed that the inclusion of performance features would influence their decision to buy a pair of jeans. This may seem at odds with the caution for a light hand with non-cotton ratios in denim, but the solution could be found within textile chemistry. For example, 40 percent of U.S. respondents said they would pay more for denim that could repel water. This has been achieved already through the STORM Denim™ technology, a textile chemical finish. Forty-eight percent of U.S. respondents cited moisture wicking as a desirable denim feature that they would be willing to pay more to have.  Again, textile finishing chemistries such as the TransDRY™ technology offer this without compromising the authenticity of cotton denim.

The good news for denim manufacturers and brands is that blue jeans seem as popular as ever with global consumers and, interestingly, are very popular in warmer climates such as Colombia and Mexico. While closet space allocations in Asian markets may hamper ownership totals, the enthusiasm for denim is high. Directionally, authenticity is the watchword, including the thoughtful addition of non-cotton fibers and performance-enhancing finishes to product offerings.