From Levi’s archivist to street style stars, the book highlights the female makers, creators and shakers leading the denim industry.

Here, Leverton offers a behind-the-scenes look at the making of her book, available now. 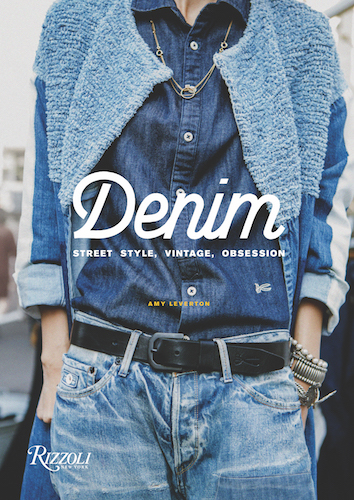 Rivet: How do you define a denim dudette?

Amy Leverton: The beauty of denim is it is for everyone. A denim dudette could be anyone with a passion for indigo. But, specifically for the book I selected women who have a more direct link and work in all aspects of the industry. So, women who work for mills or laundries, denim designers, brand founders, artisans and craftspeople, store owners, influencers and magazine editors. I purposely made the reach very broad to really capture the different interpretations and looks and the true diversity of denim.

Rivet: What was the most memorable interview for the book?

AL: Well the sweetest story is this: For “Denim Dudes” we included Bart Sights who is the Levi’s head of technical innovation. His sister is Carrie Eddmenson of the brand Imogene + Willie. They are a true denim family. She designed a jean and called it the Bart, and for his shoot for “Denim Dudes” he chose to wear that jean.

I was at the shoot with Carrie for [“Denim: Street Style, Vintage, Obsesssion”] and one of the first things I do when I arrive is subtly check out what jean they are wearing. And get this, she was wearing the exact same jean that Bart wore! He is pretty small and he sent it over to her three days previously, especially for the shoot. The same jean was featured in both books on both brother and sister. How cool is that? I showed Bart the book and he almost cried when he read her page and saw the photo, it was so touching.

What Hedonism and Burnout Culture Mean for Denim Trends

Rivet: Which dudette do you admire the most?

AL: I would have to say Lynn Downey. She is retired now, but is famous for running the Levi’s archive in San Francisco. She knows a vast amount, she built that archive into what it is today and for that, she has preserved arguably the most important and beautifully kept archive in the world. History is so important when it comes to denim so you cannot get better than that. Our industry owes her a lot.

Rivet: What are some commonalities between the women you interviewed?

AL: Almost every woman talked about feeling “herself.” That’s again what makes denim such a unique fabric, because here you have a book full of very different women with very different styles and each and every one of them has found a denim style that makes them feel truly themselves. A jean that reflects their personality and gives them confidence. I think that is the coolest.

Rivet: What traits do denim dudes and dudettes share?

AL: Passion, 100 percent. Every person in both [books] spoke from their heart, told stories and often got emotional about their jeans. They really cared for the industry they work in and that passion came through. Denim is a very emotional fabric, it is very personal and that comes across in the stories.

Rivet: What was one of the biggest difference between denim dudes and dudettes?

AL: Haha, ego! This is funny because there were a few guys in “Denim Dudes” who I mailed telling them it’s about denim style and to pick their ultimate outfit and be aware it is for a book aiming to inspire people.

Now I know that men do not approach denim with the same fashion flair as women but some guys, despite telling them it’s not about them it’s about style, turned up in the most basic outfits. There were a few misunderstandings where the guys just thought it was all about them.

With the women, they all got that right away and wanted to give me what I needed. I think that actually tells us a lot about the way women and men view themselves differently. Sorry guys!