If the children are our future, so, apparently, is a lot of urban living.

Recent headlines have Millennials leaving the suburbs behind for the nation’s cities, both big and small. They’re less likely than their parents to get their driver’s license or own a car. They also have a real aptitude for technology. All of which is fine, until we remember how much retail has relied on the suburban mall shopper.

“Retailers have to be demographers,” says Marian Salzman, trendspotter and CEO of Hava PR. “We’re asking people to do things that have nothing to do with being a merchandiser. Growing up, the ritual was to go to Bamberger’s for everything—back-to-school, the holidays, a present for grandma. But those rituals are no more.”

A report by the Edward J. Bloustein School of Planning and Public Policy at Rutgers University, showed people in their 20s and early 30s are opting to leave the suburbs for “higher-density, non-suburban activity environments and do not, in general, find suburban employment and [the]…insular office campus particularly attractive.”

And this isn’t just a U.S. trend. Research from Euromonitor International shows by 2030, 60 percent of the world’s population will live in urban areas, up from 54 percent today.

Add to that, a study last year showed fewer U.S. teens dream of owning their own car. In 1983, 90 percent of 19-year-olds had a driver’s license, but that number has fallen to about two-thirds, according to an article in Fortune magazine.

In a meeting last month, executives in Bergen County, New Jersey, explored how they could keep young adults in North Jersey suburbs and cities, instead of letting them be lured to nearby New York City.

Executives there have cause for concern: Paramus, New Jersey, is a top 10 zip code in the nation for retail sales, with four major malls that generate more than $5 billion each year, despite county blue laws that force stores to close every Sunday.

But Millennials don’t spell inherent doom for suburban shopping centers. As the largest generation, they will account for a third of retail spending by 2020, according to McKinsey & Company. They’re social and relish shopping in stores—to the point that 93 percent of their purchases are in-store according to the Cotton Incorporated Lifestyle Monitor Survey. And half of Millennials shop for apparel at department stores, likely due to those stores’ omnichannel initiatives and youth-focused brands.

Another point to keep in mind: other analysts say young people aren’t adopting city life for good; they’re just taking their time settling down in life.

“One of the biggest ways that Millennials differ from previous generations is they’re getting married and having kids much later,” Jed Kolko, senior fellow at the Terner Center for Housing Innovation at University of California, Berkeley, told eMarketer. “Once we take that into account, Millennials are actually as likely to own a home…as young people were 20 years ago.”

So, retailers have to appease this large segment that’s discovering city life—with its mass transportation, bike lanes, walkable streets, and Uber drivers—while nurturing the customer who has made the suburban choice.

To that end, stores like Nordstrom and Neiman Marcus plan to open their first Manhattan locations in 2018. And for top tier stores, such a move makes sense.

The Euromonitor finds urban consumers typically spend more on apparel and textiles than their rural counterparts. But they have different needs and expectations than rural shoppers: they’re slightly less loyal (55 percent versus 48 percent) and desire new styles faster (51 percent versus 39 percent), according to Monitor statistics. 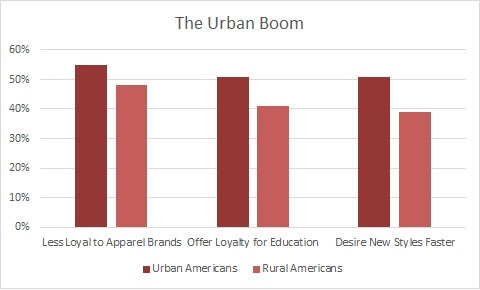 On the other end of the spectrum, Walmart recently announced it is closing its 102 Walmart Express smaller format units, while it concentrates on its traditional supercenters, neighborhood markets, and e-commerce platforms.

“(Mass merchants) can appeal to Millennials through home deliveries, urban pickup locations—the dark store concept,” Howell says. “I don’t see them leaving the suburbs or abandoning the large format superstores. To appeal to urban Millennials, it may turn out to be more of an online offering.”

“Retailers are being challenged on the square footage front. They have a lot more product than they have the space,” said T1V’s Blair Rubio, marketing manager. She explained how T1V client Bebe uses touchscreen tables to bring the online experience in-store.

“Bebe has a very small footprint but a huge catalog of product,” Rubio said. “Rather than saying, ‘You should look at this other item online when you get home,’ associates can show them while they’re in the store, can add it to one transaction, have it shipped—and they close the sale.”

Salzman also thinks traditional stores will increase their use of pop-up locations, “We’ll see more of these in city settings, so consumers can see, feel and touch product—like at the Apple store.”

Still, suburban downtowns are building newer apartments with businesses at the ground level. And Uber has become a ubiquitous player among young adults, both in cities and suburbs. Rather than give customers just a traditional coupon, stores might start offering Uber users a promo code that entices them to visit store locations.

“I think it’s all part of an absolute evolution from bricks to clicks and back again,” Salzman says. “Stores need to get shoppers to focus on the pleasure of purchasing. That’s the challenge and the opportunity in an industry that needs to reinvent itself.”