A show of hands for everyone who felt like a winner after driving to the area shopping center thinking it would be a zoo and finding manageable (as opposed to insufferable) crowds and well-staffed stores?

Analysts are still predicting overall holiday sales increases in the low single digits over last year. But the way they reach that marker has changed, with mobile shopping emerging as the dark horse.

“My take is that the sales environment is uneven and, of course, more dominated by online purchases,” says Michael Niemira, principal and chief economist for The Retail Economist.

The National Retail Federation expects sales to grow 3.9% and the International Council of Shopping Centers projects a 3.3% increase over 2014.

Between mobile and online shopping, as well as unseasonably warm weather, foot traffic has been down in stores. ShopperTrak reported there was a 10.4% decrease in in-store sales over Black Friday weekend, but e-commerce sales were up 16 percent. In fact, Cyber Monday reached $3.11 billion in total digital spending, according to comScore, making it the heaviest e-commerce spending day in history. Mobiles sales accounted for 27 percent of the total, with $838 million spent via smartphones and tablets.

Why Retailers Should Be Worried About Rising Consumer Debt: Week Ahead

Before the season even got underway this year, nearly half (47 percent) of all holiday shipping days (23 percent), according to the Cotton Incorporated Lifestyle Monitor Survey.

Meanwhile, 44 percent planned to shop for gifts in-store on Black Friday, followed by Small Business Saturday (16 percent), after Christmas (16 percent, down significantly from 25 percent in 2013 and 2012), and on Thanksgiving Day (13 percent). 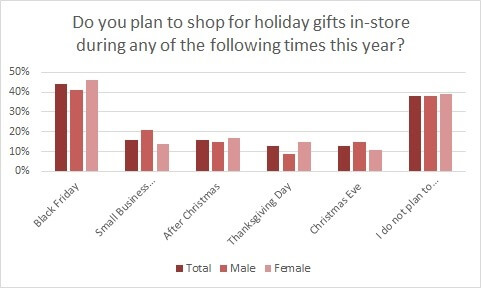 WSL’s holiday survey found fewer shoppers were excited about Black Friday because “the sales aren’t as good as they used to be” (73 percent) and they anticipated crowds that “are too crazy” (87 percent).

Another big change to the holiday shopping season is its length. Shoppers start early but they’re well aware that the deals just keep on coming even after the fat man sings. Prosper Insights reports 57 percent of holiday gift givers started their shopping as of Nov. 10. But since they’d already gotten a start on their lists, consumers planned to slow down over the Black Friday weekend. Prosper reports Black Friday weekend shopping dropped 5 percent between 2013 and 2014.

While a number of news outlets have reported that this year’s unseasonably warm weather has left retailers with high inventories that need to be drastically marked down, the holidays are traditionally a pricing game, where consumers tend to wait for deals right up until the final week before Christmas.

According to a survey from Retale of 2014 shoppers, 15 percent of all holiday gift buyers wait until the last minute. And First Data noted that nine out of 10 of the top spending days occur in December. In fact, Christmas Eve was the biggest spending day last year, while foot traffic was strongest on the Sunday before Christmas.

Of course, the increase in gift card giving has turned January into a strong season for shopping, as consumers look to redeem their cards on deeply discounted merchandise. The Monitor survey shows 61 percent of shoppers plan to give gift cards this year, followed by clothes (58 percent), toys (43 percent), and electronics (35 percent). Electronics will get most of the spend, though, accounting for $377, followed by $225 for apparel, $194 for gift cards, and $169 for home textiles.

Still, apparel is traditionally a favored gift item, and more than eight in 10 shoppers (85 percent) plan to spend more (23 percent) or the same (62 percent) on clothing gifts this year compared to last, according to the Monitor survey.

And among those who plan to give clothes as gifts, the Monitor finds about two-thirds plan to make their purchases in-store versus one-third online.

While sales dropped 6.3% the week after Thanksgiving, according to The Retail Economist-Goldman Sachs Weekly Chain Store Sales Index, they were up 1.7% from the year before. And there are signs consumers have money to spend this year.

Job gains, lower unemployment and a strong housing market have helped keep consumer sentiment positive for the 2015 season. Decreased gas prices have also helped put more money in consumers’ wallets. Nationally, the average price per gallon is at the $2 mark, which is $0.55 cents lower than last year, according to the AAA Daily Fuel Gauge Report. Analysts say a penny drop in gas prices puts a billion dollars back in shoppers’ pockets.

“We’ve had low gas prices for over a year and that really impacts people’s ability to spend,” says the ICSC’s Jesse Tron, vice president and spokesman.

By the end of this season, Niemira expects consumers will meet holiday spending expectations.

“The November pace is running about 1.9% year over year, seasonally adjusted,” he says. “So to get to that for both November and December, sales will have to accelerate from the (current) unadjusted pace of 1.1%. I’m still comfortable with this expectation for the season. With consumer fundamentals healthy, it is likely to see December holiday sales strengthen as Christmas Day approaches.”