In talking with a Millennial recently about going to the movies, she said she hadn’t been to a theater showing in about a year. Why? She doesn’t like the movie industry “dictating” the time and dates she can see the latest feature.

“I’m a Millennial,” she said, “I don’t want things shoved down my throat.” Take that attitude and you understand why the Back-to-School (BTS) shopping season became so elongated. While kids can’t change the first day of school, it seems that unless a principal was threatening after-school detention, they weren’t rushing to finish their shopping, either.

The good news for retailers, though, is that while consumers were indeed taking their time to shop, they were actually spending more, once they got over the heat waves, late Labor Day, and saw what their friends were wearing.

Jesse Tron, a spokesperson for The International Council of Shopping Center, says the industry definitely saw a lengthening of the BTS season.

“For all the major shopping seasons, consumers are starting earlier and ending later,” he says. “Nowhere will this be more evident than the upcoming winter holiday season. But for BTS specifically, while the majority of purchases are still taking place in August, there were certainly sales spilling late into September and even October.”

The NPD Group’s Marshal Cohen, chief industry analyst, said in a blog post, “Consumers are shopping differently than they were in the past; September is becoming more important to the back-to-school season.”

Tron points out that the U.S. Commerce Department’s overall sales for July-September increased 2.3%. He said that’s actually stronger than it appears because it follows a 4.2% increase from 2014. Meanwhile, ShopperTrak reported in-store shopper visits decreased 2.7% but overall sales increased 4.7%, year over year, meaning consumers went to stores less but spent more on each trip.

Prior to the school shopping season, BTS apparel shoppers had planned to buy about three in four items in-store and one in four online, according to the Cotton Incorporated Lifestyle Monitor Survey. And BTS shoppers planned to spend about $265 on back-to-school clothes per person, up from $243 in 2014 and $231 in 2013.  Consumers making $50,000 or more per year planned to spend about 70 percent more per person on BTS clothes ($333) than their lower income counterparts ($196).

“Apparel is a prime example,” he says, noting that it increased by 3.3% for July-to-September 2015 versus 2.3% for the same period last year. “Similarly the sporting goods, hobby, book, and music stores category also increased year-over-year (5.3% versus 1.7%). On the other side, electronics and appliance stores were well off (-3.8%) compared to the previous year. All in all though, I’d say it was a stronger season than what was originally forecasted by many. Also, just to note, the September numbers are preliminary and could be revised after October numbers come in.”

Besides the Millennial penchant for shopping on their own personal schedules, a later Labor Day meant shoppers weren’t racing to stores the first week of September for holiday sales. Then, those who put off their shopping were confronted with September heat waves in many major cities, including Los Angeles, Chicago, Boston and New York, which didn’t inspire consumers to shop for long pants, fall sweaters and new jackets. In fact, 30 states had “much above average” September temperatures, according to the National Oceanic and Atmospheric Administration, and nine were record warm. All of these factors conspired to change consumer spending, if not necessarily hamper it. 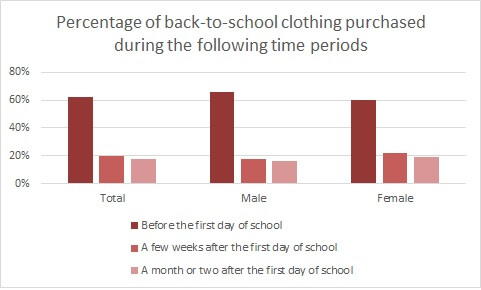 The majority of back-to-school apparel shoppers planned to purchase tops (86 percent), socks (73 percent), jeans (73 percent), pants (71 percent), and intimates (53 percent), according to Monitor statistics. Among those items, denim performed very well, prompting NPD’s Cohen to post on Twitter that 72 million pairs of jeans sold in August in the U.S., “Best month of the year, by far.”

Earlier this season, an NPD survey showed consumers were off to a slower start than usual this season. While August had been considered the traditional end of the BTS season, most consumers (55 percent) planned to start their BTS shopping then. That was almost double the starts of July (31 percent) and more than five times that of June (9 percent). The Monitor survey found shoppers planned to buy 20 percent of their BTS clothes after the first day of school, and another 18 percent of their school wardrobes would be purchased a month or two after school started. A Prosper Insights & Analytics survey showed just 13.3% had completed their BTS shopping by Aug. 11.

Tron says fashion trends are also a major driver for the delayed buying.

“Our survey that we conducted with Teen Vogue (women 13-to-29) found that 80 percent think BTS is important because it’s a fresh start and 70 percent are looking forward to trying new trends and styles,” he says. “Both of these are fashion driven and one phenomenon we’ve noted is that many kids—especially high school and college—actually don’t make all of their clothing purchases until they have actually gone back to school, so they can see what others are wearing. We’ve seen this increase a little each year, and I think we will start to see retailers offer promotions later than they have in the past.”