Denim manufacturers will soon be able to get their hands on Huue’s sustainable indigo dye.

The funding comes after the Bay Area startup last year partnered with Ginkgo Bioworks to ramp up production of bacteria-derived indigo. Huue, named one of Time’s best inventions in 2021, has also attracted attention from denim luminary Adriano Goldschmied.

As demand for sustainability and transparency continues to rise in the fashion industry, many brands are looking to increase their use of environmentally friendly fibers, fabrics and production methods.

However, the industry has “always been challenged” with sustainably producing dyes, according to Huue. In fact, it claims textile dyeing is the second-largest global water polluter. For the past century, dyes have been made from petroleum in addition to harsh chemicals like cyanide and formaldehyde, it added.

“The world can’t wait for sustainable solutions, and consumers are starting to hold their favorite brands accountable to using eco-friendly materials in their products,” said CEO Michelle Zhu, who co-founded Huue in 2018 along with chief scientific officer Tammy Hsu. 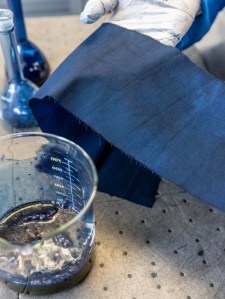 To develop what it bills as the “world’s most” sustainable dyes, Huue employs bio-based technology that mirrors how color is produced in the natural world, thus creating sustainable dyes that are “just as effective as conventional,” but without toxic chemicals such as petroleum and its ensuing environmental impact.

“Huue’s enzymatically produced dye mimics how colors are produced in nature and is the only bio-based technology that is sustainable while also slotting into the existing denim manufacturing process as a one-to-one solution,” said the company, which targets the beauty and food industries in addition to textiles.

According to the World Bank, textile and fabric dyeing causes 17 percent of global industrial water pollution, creating toxic runoff that damages local environments and human health. Additionally, Huue points out that every kilogram of indigo produced uses more than 100 kilograms of petroleum. What’s more, the chemical production of indigo alone is responsible for upwards of 1.4 million metric tons of annual carbon dioxide emissions.

To combat this, Huue is creating a drop-in replacement product that can displace the 70,000-80,000 metric tons of conventional indigo dye made every year.

“Huue’s breakthrough approach to bio-based dye manufacturing is a game-changer for industries under mounting pressure to minimize their environmental footprint,” said Corinna Chen, partner at Material Impact, who is joining Huue’s board. “Huue’s market entry is perfectly timed, and we are thrilled to partner with this talented team to scale up and commercialize the dye of the future.”

The textile dyeing sector has seen considerable activity in recent days. Archroma on Tuesday announced a $718 million deal to acquire Huntsman’s Textile Effects division in a transaction expected to close early next year.

CEO Peter Huntsman said the tie-up will “create a world leader in textile chemicals and dyes, with a leadership in sustainability and innovation.”