A zero-carbon Yeezy might just be the key to Kanye West’s dream of an Adidas-Nike collaboration if the former’s recent team-up with Allbirds is any indicator.

Adidas and Allbirds unveiled the result of a year-long collaboration Wednesday that saw the two footwear brands take on the challenge of creating a performance shoe with the lowest carbon emissions on the market.

The Futurecraft.Footprint, with a carbon footprint of just 2.94 kilograms of carbon dioxide equivalent (CO2e), represents a personal best for both brands. Though it misses the two-kilogram target they had aimed for, the total equates to a 63 percent reduction compared to the Adizero RC3, the running shoe the brands used as a starting point for their work.

“We’ve fallen a little bit short here at 2.94,” Allbirds’ co-founder and co-CEO Tim Brown said at a virtual event the partners hosted Wednesday. “We’re proud of that number. We think that it’s leading the conversation in the whole industry, to be honest, but it also shows how far we’ve got to go. And make no mistake, we’re in a race, zero is the target, and we’re going to go again and be relentless in pursuit of going even lower, moving even faster to solve what is the problem of our generation.”

Though a wider release remains a year away, the brands plan to raffle off 100 pairs this month to members of Adidas’ Creators Club loyalty program. A 10,000-pair, limited run is also planned for the upcoming Fall/Winter season.

The shoe combines proprietary technology from both brands, including in the midsole, which is composed of a mix of Adidas’ Lightstrike midsole EVA and Allbirds’ lower-carbon, sugarcane-based SweetFoam EVA. The shoe’s upper represents another collaboration. The newly developed material is made with 70 percent recycled polyester and 30 percent natural, wood pulp-based Tencel.

Angela Mantilla, Adidas’ senior manager footprint analytics, and Hana Kajimura, Allbirds’ sustainability lead, both acknowledged the initial trepidation they felt working with a competitor on such an intimate level.

“There were certainly moments where it felt like I was breaking the rules or something, but I’d have to check myself and be like, ‘Wait a second, who made these rules? This is exactly as it should be,’” Kajimura said. 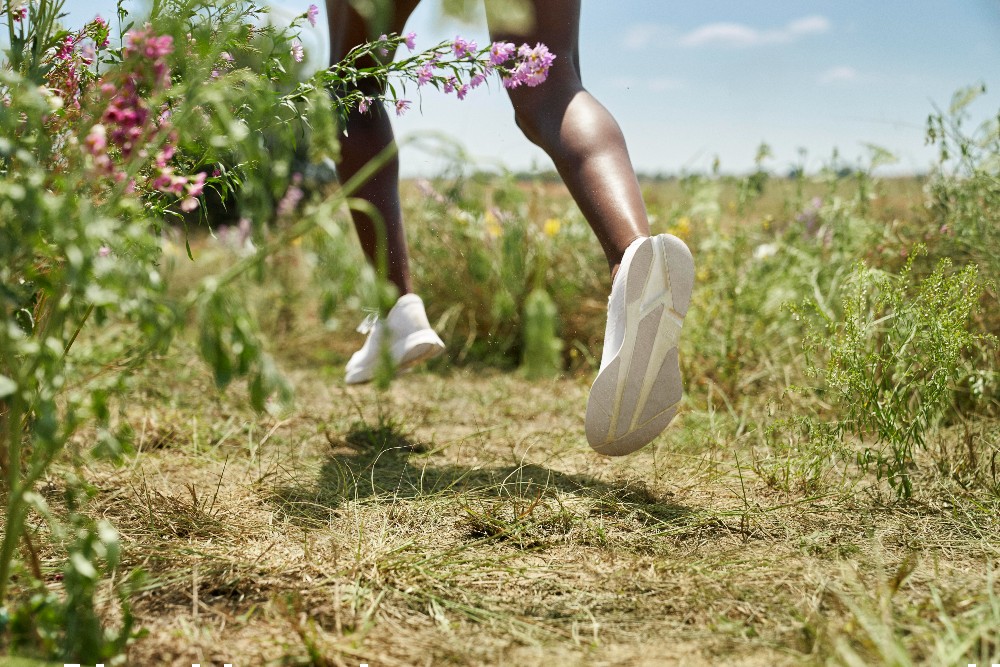 Whereas other collaborations may involve counterparts on the design, development or marketing side working together, creating the Futurecraft.Footprint involved collaboration “in almost every single area of the shoe, from marketing, development, design, packaging, carbon calculation, materials, the list goes on,” Kimia Yaraghchian, product manager, running at Adidas, said.

“We could really go into depth on all these topics, especially when we talk about lifecycle assessment and lowering the carbon footprint of the full project,” Yaraghchian said. “That was so tremendously helpful, especially when talking about accelerating the solution finding. And also, I have to say, finding a peer from the same industry really helped us to get down to the product conversation immediately.”

Specifically, when it comes to solving the world’s biggest problems, Brian Grevy, executive board member global brands at Adidas, believes collaboration is key.

“You cannot do it alone,” Grevy said. “You have to partner up and I think that’s the open-source attitude we have within Adidas is to say, ‘Who do we partner up with?’ And I think with Tim and Allbirds and the team, they lived the same spirit. Because no one will solve it in isolation, it’s only when we join forces we’ll solve that.”

To calculate the shoe’s carbon footprint, Kajimura said the brands used a lifecycle assessment that accounted for emissions related to shoemaking—including both the materials and manufacturing—packaging, transportation, product use and end of life.

Perhaps unsurprisingly, the vast majority of the Futurecraft.Footprint’s carbon footprint, 2.16 kilograms of CO2e comes from the shoemaking process. End of life and packaging, 0.37 and 0.32 kilograms, respectively, accounted for the two other major chunks.

The shoe’s final carbon footprint, 2.94, though not what the companies were shooting for, places the Futurecraft.Footprint well below most every other shoe out there. When the Brazilian footwear brand Cariuma unveiled its Ibi Slip-On in March, for example, it touted it as “the world’s lowest carbon footprint sneaker.” According to an assessment conducted by a third-party consultant, Pré Sustainability, the shoe generated 5.48 kilograms of CO2e. 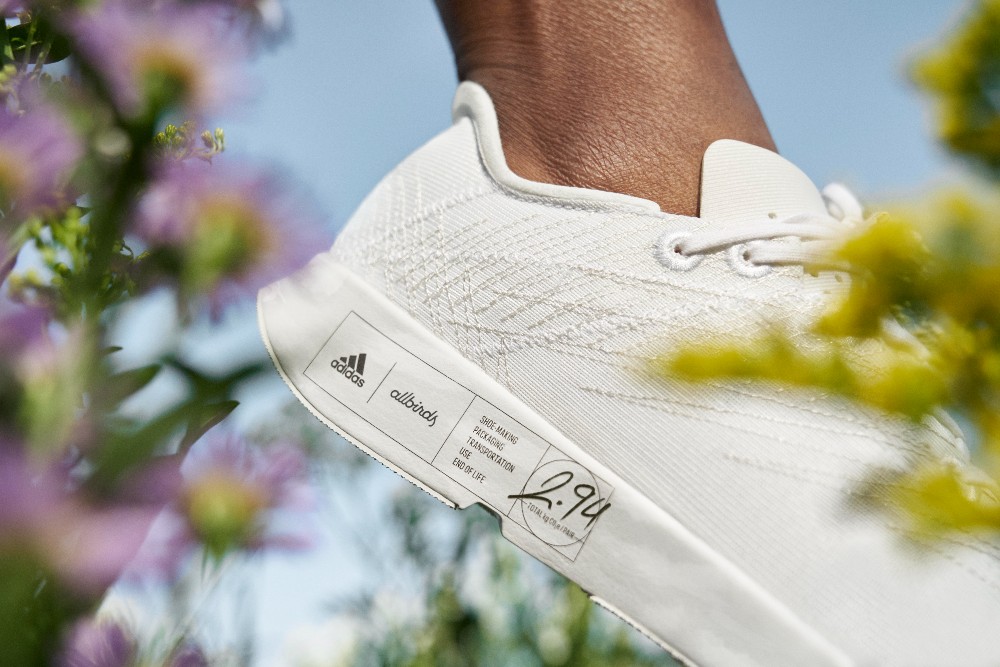 According to a 2013 study led by the Massachusetts Institute of Technology, a typical pair of running shoes emits just over 13 kg of CO2e. Allbirds scored a 9.2 on its Staple Dash sneaker in December. Roscomar’s 100 percent vegan Tencel-knit Rv3, meanwhile, produces 6.5 kilograms of CO2e. The Adizero RC3, the shoe Adidas and Allbirds used as their starting point, generates 7.86 kilograms of CO2e per pair.

Jamie McLellan, Allbirds’ head of design, compared the design process for the Futurecraft.Footprint to a spiral.

“You circle inwards a little closer and try and shave off a little carbon each time, and each time you’ll be circling closer and closer to that ideal,” McLellan said. “This one it felt like we did that all the way up until the very last possible moment and… every touchpoint we were shaving a little bit more off, can we change the yarn here, can we just remove a little bit of a stitch here, can we take some dye out, can we shave a bit off the packaging, can we just nest that a little more efficiently and… every one of those little shavings just ended up bringing the number down, right up until the last moment.”