Meet the Stan Smith Mylo, a vegan version of the iconic Adidas sneaker that only looks and feels like leather. Its secret ingredient? Mycelium, the branching root network that sprouts mushrooms.

The shoe is the first product to emerge from a partnership between the sportswear leviathan and Bolt Threads, a San Francisco startup that cultivates its animal-free hide using a “highly efficient” growing technique that coaxes the mycelium to extend upward and into an organized mat of enmeshed cells. The material is dyed, tanned and embossed to produce a leather-like texture. The entire process, Bolt Threads says, uses less water and emits fewer greenhouse gases than bovine leather.

Adidas, luxury conglomerate Kering and fellow brands Lululemon and Stella McCartney are members of the so-called Mylo consortium, a group whose goal is bringing the biomaterial to market this year. In March, Stella McCartney unveiled what it billed as the world’s first luxury garments derived from Mylo: a bustier top and a pair of loose trousers, neither of which is available for sale.

Adidas said it pioneered another first with its breakthrough sneaker, which it described as the “next sustainable recreation” of the Stan Smith following a recent iteration made with Primegreen, a performance fabric derived from recycled polyester. This shoe, too, will not be on store shelves, but it will pave the way, the company promised, for a commercially available proof of concept “in the near future.” (Adidas did not specify a timeline or suggest pricing.) 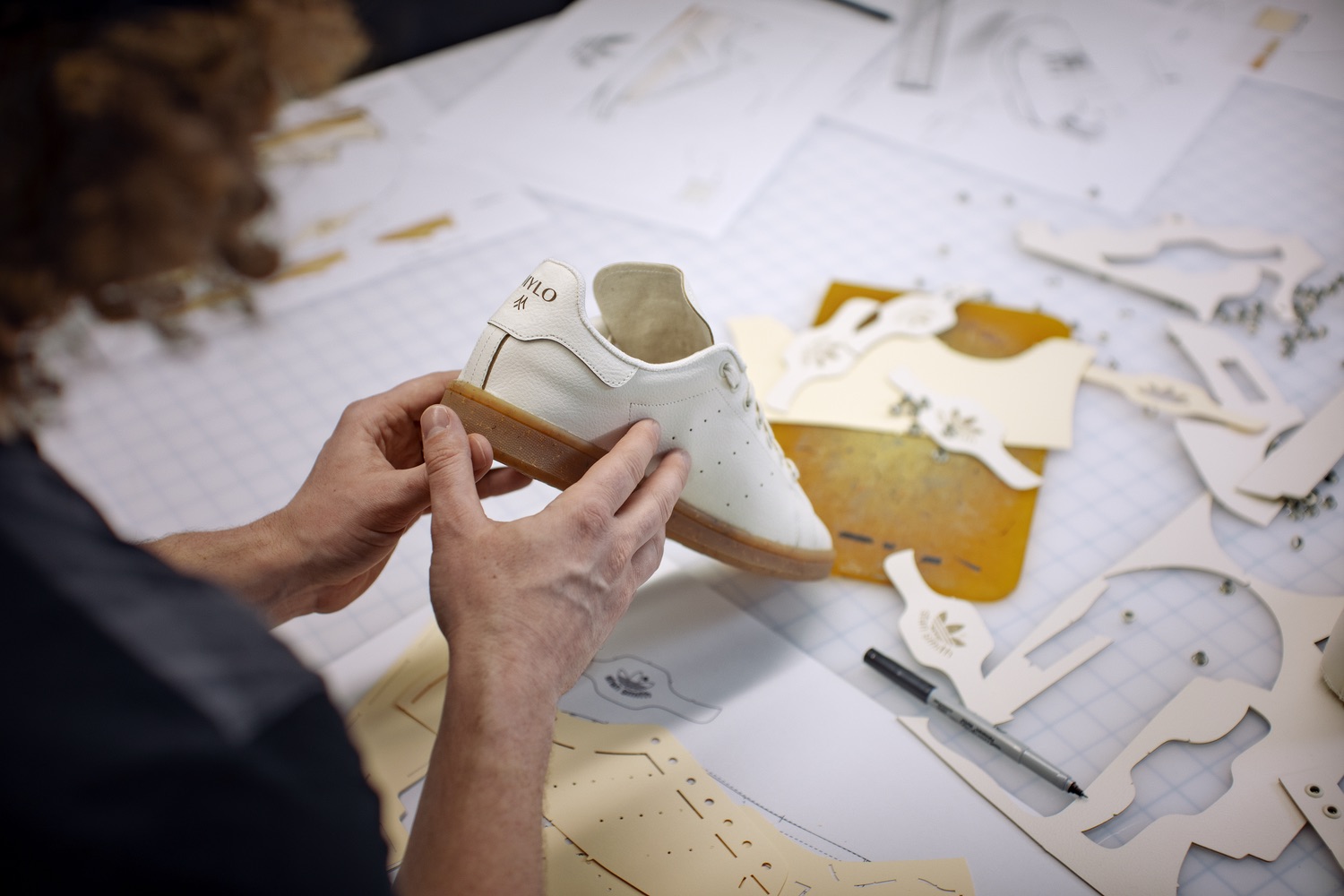 Nevertheless, the cream-colored prototype, which features a perforated three-stripe design and heel tab overlay made with Mylo and a midsole composed of natural rubber, marks a milestone for the firm, which has plotted to create footwear that is regenerative and “made with nature.”

“The introduction of Mylo as a new material is a major step forward in our bold ambition to help end plastic waste,” Amy Jones Vaterlaus, global head of future at Adidas, said in a statement. “As a planet, we must learn to work with nature rather than against it and put all our efforts into finding innovative solutions that are created responsibly with resources that renew at a sustainable pace. Designed in synergy with earth’s ecosystems. And as a brand, we continue to explore the possibilities in material innovation.”

Adidas has pledged to eliminate virgin polyester from its supply chain by 2024. This year, the juggernaut said it will use more than 60 percent recycled polyester in its products. Its collaboration with Bolt Threads, it said, follows from this shared “mission alignment” and commitment to a more sustainable future. Though Mylo can take on any color, finish or pattern, Adidas said it chose the Stan Smith silhouette because it has built a reputation for being one of its most sustainable footwear franchises.

Even so, vegan Stan Smith fans had to wait a while. The first animal-free shoe from the line was a collaboration with Stella McCartney, a longstanding Adidas collaborator, in 2018. The sneaker comprised polyurethane-based vegan leather—essentially plastic—and non-animal-based glues.

Mylo is more grounded in the natural world, though it’s only certified as between 60 percent to 85 percent bio-based under the German DIN-Geprüft standard because it employs “some amount” of petrochemicals in finishing. Like animal leather and conventional vegan leather, Mylo is not currently biodegradable. Bolt Threads says it hopes to create versions that can be repurposed, recycled or returned to the ground, however.

“By creating the iconic Stan Smith with a Mylo material upper, Adidas is demonstrating the far-reaching potential of this innovative material,” said Jamie Bainbridge, vice president of product at Bolt Threads. “We are thrilled to be working with Adidas in the kind of development partnership that makes innovation a reality. Mylo has the strength and performance it does today thanks to the guidance and deep technical expertise of the Adidas team in making great footwear.”