Allbirds said it’s chosen an “unexpected athlete” as the spokesperson for its new running shoe.

The Bay Area brand released an ad campaign for its its Tree Flyer performance sneaker starring “Mean Girls” actor Lindsay Lohan. In a video that debuted on YouTube Wednesday, the athleisure-clad star dropped references to the 2004 cult classic while wearing the “bouncy” athletic footwear at her Hollywood home. Allbirds developed an exclusive Lux Pink color way for the campaign—a nod to one of the movie’s iconic lines: “On Wednesdays, we wear pink.”

“I didn’t run track in high school, I was more of a ‘mathlete,’” Lohan said in the one-minute short, referencing the nerdy character she played in the movie. “So I get it—as a running spokesperson, I guess I’m a little unexpected.” Lohan made light of her status as the face of an athletic shoe by pretending to scroll through a barrage of incredulous internet comments on her phone. Lohan teased the announcement on Monday, posting behind-the-scenes footage of the video shoot on her Instagram account. 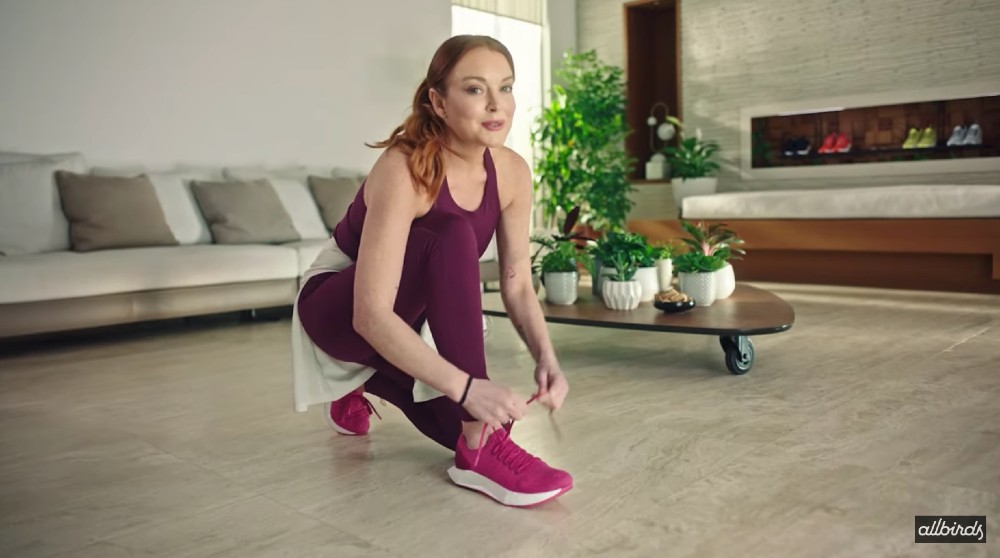 Lohan also pointed out that the shoes “don’t just look cute—they’re made with natural materials.”

The Tree Flyer, which officially launched in May, was designed with a lightweight and breathable eucalyptus mesh upper and a new high-performance midsole made from SwiftFoam, a castor-bean-oil-based compound that offers 70 percent rebound. Allbirds said the new development was 30 percent lighter than its sugarcane-based SweetFoam, which makes up the midsole portion of its most-loved styles. “Always avoid the Plastics,” Lohan said, referencing her “Mean Girls” nemeses.

The shoe represents Allbirds’ most recent foray into performance footwear, following the release of the Tree Dasher in 2020. While the Dasher was developed for everyday use and light workouts, The Tree Flyer is designed for longer runs.

Allbirds’ launched in 2016 with the Wool Runner, which, despite its moniker, was developed for walking and all-day support. The shoe catapulted the brand to prominence, and it has since expanded into additional footwear silhouettes as well as apparel.