Allbirds is getting into resale.

After years of building its name on its sustainable materials and ethos, the lifestyle sneaker brand announced the launch of Allbirds ReRun Thursday. Created in partnership with the recommerce expert Trove, the new platform will offer customers at three stores the option of trading in their “preloved” shoes for $20 in store credit.

Though ReRun is initially rolling out in Los Angeles, Chicago and New York City, Allbirds said it plans to expand to additional retail locations nationally. Prices for the “slightly imperfect and gently used” shoes start at $59. The company said it will consider expanding to new categories in the future.

The ReRun site currently lists hundreds of styles—each colorway is listed separately—some with one or two sizes, but many with a broad range of options. The platform is exclusively available in the United States for now. 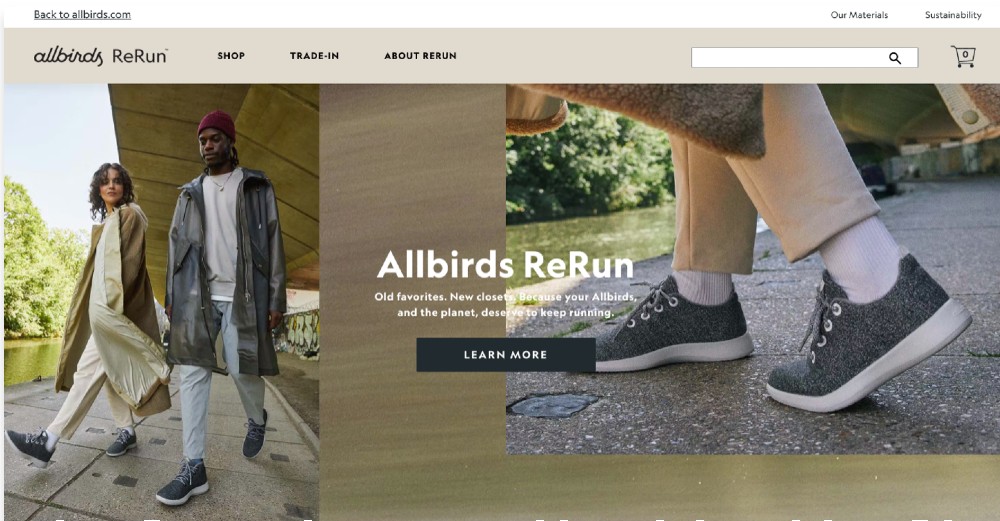 Allbirds ReRun ties into the San Francisco-based company’s larger sustainability “Flight Plan.” Unveiled in July, the roadmap includes commitments to reduce the brand’s per-product carbon footprint by half by the end of 2025. By 2030, it hopes to bring its per-unit footprint below 1 kilogram of carbon dioxide equivalent and reduce its absolute emissions by 42 percent compared to 2020.

The recommerce partnership with Trove, Allbirds said, will prolong the life of its products, another key element of the sustainability plan it unveiled last summer. By 2025, the company is aiming to double the lifetime of its footwear and apparel.

“To create a more sustainable fashion economy, it’s crucial that we take a holistic approach,” Hana Kajimura, head of sustainability at Allbirds, said in a statement. “By launching our trade-in program, ReRun, we will enable our customers to play an integral role in extending the life of our shoes. We always seek partners who share our commitment to sustainability, and we’re thrilled to work with Trove on our first recommerce initiative.”

Brand-led resale initiatives have flourished of late. In November, Crocs announced it was partnering with ThredUp. The initiative invites the clog brand’s consumers to use a prepaid shipping label to mail their gently used goods to ThredUp, where they are inspected for condition and quality before being listed on its site. When an item sells, shoppers receive credit that can be used toward buying new Crocs gear.

When Allbirds began the process of going public last year, it made sustainability a central part of its identity, going so far as to dub its offering a “Sustainable Public Equity Offering.” Though the SPO framing was eventually dropped in a later filing, it held on to the criterion the sustainable business organization BSR had created for Allbirds.

The brand’s Flight Plan calls for it to obtain 100 percent of its wool from regenerative sources, and reduce or sequester 100 percent of on-farm emissions related to its wool by 2025—the deadline for each of the roadmap’s 10 central commitments. Allbirds also expects to grow sustainably sourced, natural or recycled materials to 75 percent of its mix; reduce the carbon footprint of its raw materials 25 percent; and reduce raw materials use by 25 percent across all products.

The Flight Plan also includes several goals related to energy usage, including shifting to 100 percent renewable energy for all owned and operated facilities and finished goods manufacturers; achieving a steady state of more than 95 percent ocean shipping; and getting 100 percent of customers to launder its products with cold water and 50 percent to hang dry its apparel.