A new tool from Asics is letting runners quantify the mental health benefits of exercise.

Using a combination of facial-scanning technology and self-report data collection, the Mind Uplifter tool—launched Wednesday for Global Running Day—allows users to measure the impact of sport across 10 emotional and cognitive metrics, Asics said.

This data will then feed into a live global study, transforming individual “Mind Uplifts” from around the world into an interactive “World Uplift Map.” When this feature goes live on July 1, users will be able to see data for cities, nations and the world as a whole. Asics said its goal is to capture data for 1 million individuals worldwide.

Christoph Correll, a professor of child and adolescent psychiatry at Berlin’s Charité Universitätsmedizin, has been studying the impact of the pandemic on mental health as a project lead on the Collaborative Outcomes study on Health and Functioning during Infection times (COH-FIT). More than 150,000 individuals across 155 countries have participated in the anonymous survey so far. In that research, Correll said, exercise has emerged as the top coping mechanism respondents are using to deal with the pandemic.

“What we’re in preliminary analysis already seeing is that there is indeed, across the globe, an impact that is negative, that pertains to depression, that pertains to anxiety—two targets that are very amenable to moving, to exercise,” Correll said Tuesday at an event Asics hosted in support of its Mind Uplifter launch.

Asics’ Mind Uplifter tool, available at minduplifter.asics.com will attempt to investigate how exactly exercise affects individuals by measuring 10 emotional and cognitive metrics, including confidence, positivity, calm, focus and alertness. It asks users to scan their faces and respond to a series of questions before and after exercising for at least 20 minutes. This will generate a Mind Uplift reading which can be shared on social media. Starting July 1, users will be able to create a profile and measure their Mind Uplift over time and across different sports. 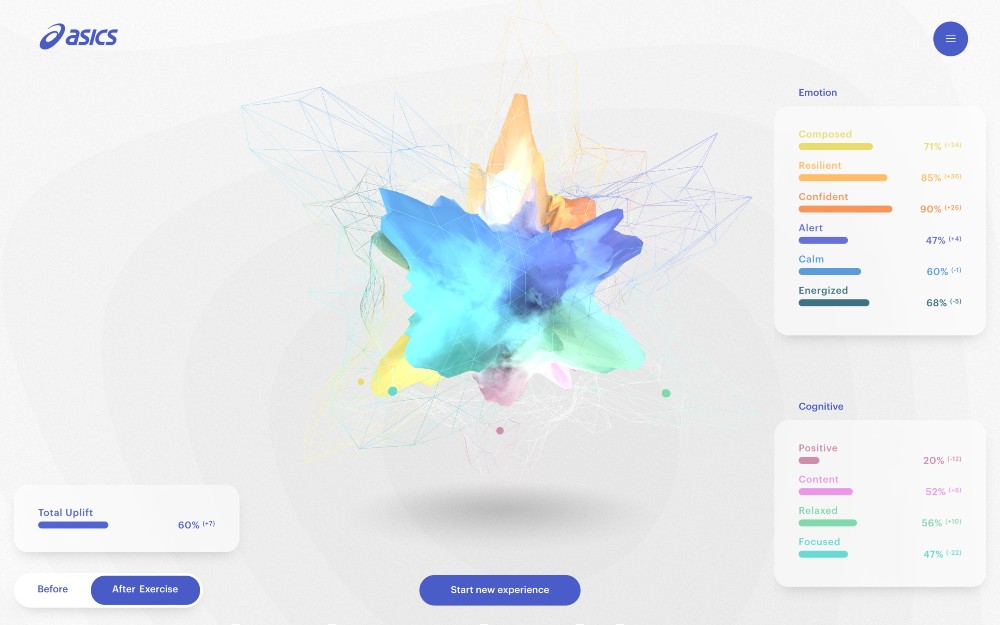 “We’re really confident, with the tools that we built, that we’ll be able to confirm our brand belief that sport has this power to uplift minds all over the world,” Fiona Berwick, Asics’ head of global marketing said.

The Mind Uplifter project follows a preliminary study Asics has been conducting over the past six months. Developed by EMOTIV, a San Francisco-based bioinformatics company, with the support of Brendon Stubbs, an exercise and mental health researcher at King’s College London, the study used electroencephalogram (EEG), facial-scanning and self-report data collection to establish the positive impact of running on core cognitive and emotional metrics.

“The research findings from the preliminary studies show us that even short amounts of exercise have the power to open the mind across cognitive and emotional metrics,” Stubbs said.

In general, Stubbs said, elite athletes saw cognitive improvements of just over 14 percent and emotional improvements of almost 11 percent—higher than everyday athletes on both counts. However, those who didn’t exercise as much, less than 150 minutes per week, saw the most improvement of any group with emotional and cognitive gains of just under 30 percent.

“The results from this extensive work is that we’re now able to apply these findings in a way that will enable the rollout of the live study,” Stubbs added.

Asics’ work with mental health extends beyond research. In honor of Mental Health Awareness Month, the running brand partnered with the National Alliance of Mental Illness of NYC last month to host a virtual Blue Jean Mile competition. The competition was inspired by Asics’ elite athlete Johnny Gregorek, who set a record last year for the fastest mile run in jeans. To participate, runners—clad in jeans, of course—simply had to run a mile in the month of May on their own time and upload their results to the Race Roster app.