As the nation’s student body prepares to begin another school year, a YouGov poll of parents with school-age children pinpoints the retailers and brands that these notoriously value-driven shoppers prefer.

Setting the stage for the upcoming season, the poll revealed that most parents plan to budget carefully in 2019, with 62 percent saying they will shop with a strict budget in mind and another 72 percent saying they are planning on choosing brands with discounts over the brands they typically prefer.

In terms of top value, respondents said that Walmart will be the foremost retailer in that respect this year, earning a value score of 41.5 from the poll’s respondents on a scale of -100 to 100. Old Navy came in second place with a value score of 33, followed by Target at 29. Rounding out the top five are Sam’s Club and Skechers, another win for the footwear retailer after a record-breaking second quarter.

As usual, advertisement and promotion will play a large role in helping back-to-school shoppers decide on their eventual purchases. According to YouGov’s poll, this is another area in which Walmart will dominate the conversation in 2019.

“The battle for parents’ attention has intensified during the advent of online and social media,” YouGov’s CEO of data products, Ted Marzilli, explained. “Compared with other retailers, Walmart fares best in Advertising Awareness, with 47 percent of these parents saying they saw an ad for the brand in the last two weeks. This is a marked increase from this time last year, when just 31 percent of these parents noted they saw an ad for Walmart.”

Walmart Cozies Up to TikTok, Snapchat, Roku and Firework

After Walmart, 35 percent confirmed they had seen a Nike ad in the last two weeks, followed by Target at 31 percent, Old Navy at 27 percent and Forever 21 at 19 percent. 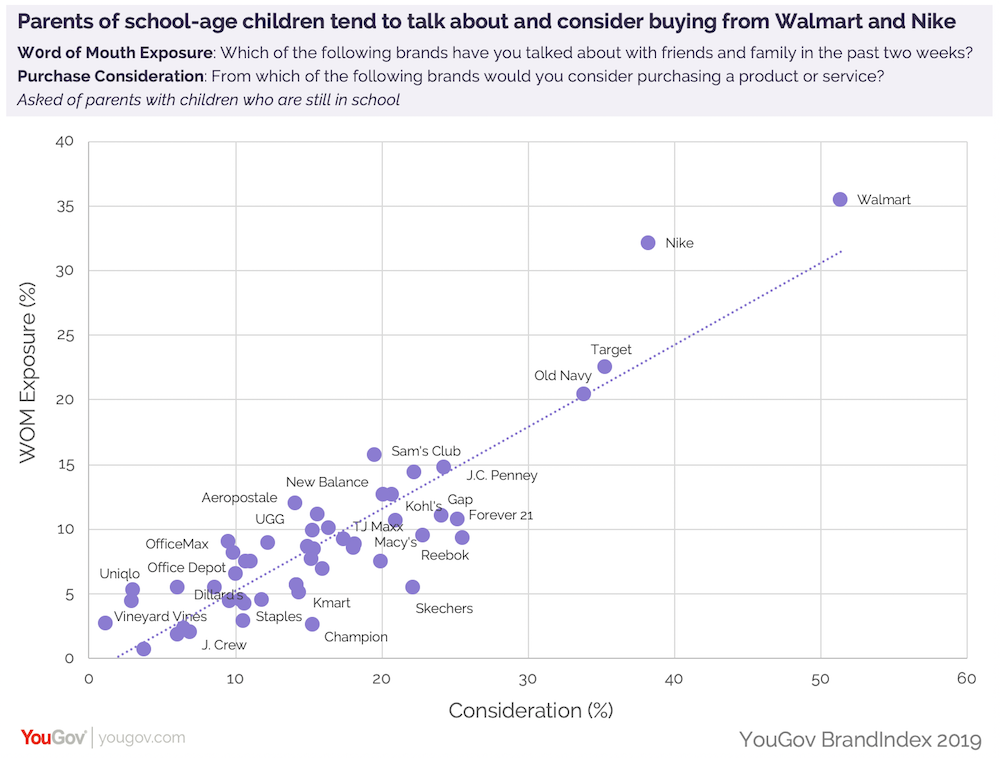 YouGov’s poll also took the pulse of the relationship between a brand’s word-of-mouth exposure and actual purchase consideration, demarcating the difference between brands that are simply buzzworthy and those that will actually perform well in the back-to-school season. For instance, Walmart—clearly a dominant force in 2019—scored highly in both metrics, outperforming all brands and retailers in both word-of-mouth exposure and purchase consideration.

Nike performed well in both categories as well, though its word-of-mouth exposure marginally outperformed actual purchase consideration. Meanwhile, Old Navy and Target both set themselves apart from the field, boasting appropriate concentrations of purchase consideration for their level of exposure compared to the industry average.

Finally, YouGov’s poll was able to identify the brands that gained the most ground with shoppers over the summer as they prepare for the back-to-school season.

Aeropostale was one of the few able to substantially increase its back-to-school purchase consideration, a measure of the percentage of shoppers willing to purchase a brand’s product in the future, moving up by 8.3 percentage points to 19.4 percent. Gap followed closely, a good sign for the brand after its split from back-to-school powerhouse Old Navy, moving up 7.2 percent for a consideration of 22.8 percent.

However, Walmart led all brands and retailers in the poll with a purchase consideration rating of 54 percent, far ahead of Nike’s 38 percent in second place. Target rounded out the top 3 at 34 percent, only slightly ahead of Old Navy’s 33 percent rating. Reebok and Forever 21 tied for fifth in the poll, with 26 percent of respondents saying they expect to purchase their products in the future.