Warner Bros. is cashing in on the viral appeal of two of its most popular franchises with the launch of new collaborative merchandise.

The rugged gear was inspired by the superhero’s iconic crime-stopping costume, and was built for true wear and tear. “While there aren’t many things tougher than Carhartt gear, Batman certainly rises to the top of the list,” Alex Guerrero, senior vice president and general manager of global product for Carhartt, said in a statement.

The capsule features sweatshirts, a T-shirt, a chore coat, hats and iron-on patches, all in the Caped Crusader’s signature color: black. The chore coat features a modular utility belt, ample pockets for tools, a quilted lining for warmth, extra stretch across the shoulders for freedom of movement, and pleated elbows for increased flexibility. Each limited-edition piece is emblazoned with a production number, along with a reflective Batman logo on the chest pocket. Meanwhile, a hoodie features an updated Carhartt-Batman logo, and a long-sleeve sweatshirt features reflective motifs on each sleeve. For fans of Catwoman, a Selina Kyle rib-knit beanie has cat ears built into its silhouette, while two other hat styles feature varying versions of the Batman emblem. 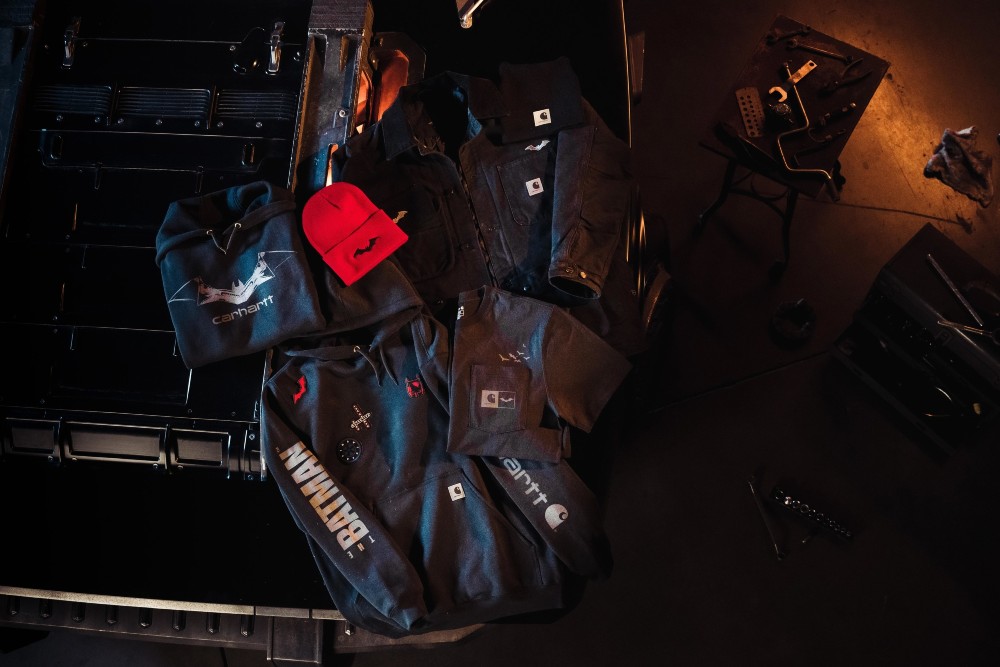 “Bringing together one of the most recognizable super heroes on the planet with the most iconic brand in workwear seemed like a perfect fit for our consumers and Batman fans alike,” Guerrero added. Dropping April 6 on Carhartt’s e-commerce site, the collection retails for $24.99 to $129.99.

Also launching this week from Warner Bros. is a Reebok collaboration featuring two of the studio’s most recognizable animated television families, The Jetsons and The Flintstones. The collection of footwear and apparel was inspired by a 1987 Hanna-Barbera crossover film that brought the Flintstones into the world of the future, while sending the Jetson family to the prehistoric town of Bedrock.

According to Reebok, models in the collection are based on characters or locations from the movie. The drop features eight different footwear styles, as well as complementary apparel like short and long-sleeve T-shirts, women’s high-rise leggings, a sports bra and a bike short.

The Reebok Classic Leather—one of the brand’s most well-known shoe silhouettes—was updated as an homage to Fred Flintstone with a clean white upper and leopard print, referencing his signature ensemble. The Classic Leather Legacy AZ gets the George Jetson treatment, with retro-futuristic details like metallic, iridescent accents, on-off switches and lightning bolts.

The Zig Kinetica II Edge incorporates the fuchsia coloring of the Flintstones’ pet dinosaur, Dino, while the Instapump Fury 94 brings together both franchises, with animal prints and furs juxtaposed against metallic details and futuristic graphics.

The moms from both shows are represented on two versions of the low-top Club C lace-up silhouette. Wilma Flintstone’s all-white dress is channeled through the shoe’s monochromatic upper, while her statement stone necklace is recreated through a custom dubrae. Jane Jetson’s version features a hot pink upper reminiscent of her bold dress, while the sockliner showcases depictions of her beauty routine and the robots that help her get ready.