Like most brands, Blowfish Malibu didn’t start out eco-friendly.

Consequently, when the women’s footwear brand began discussing how it wanted to change, it was well aware it couldn’t do so overnight. “It was really kind of sitting together, talking about looking at our processes and saying, ‘Okay, where can we improve short-term and long-term,’” Karen Bueno, vice president of marketing at Blowfish Malibu, said.

That journey kicked off last year with the 4Earth collection, a line of sneakers and sandals built with recycled plastic uppers. So far, the initiative has repurposed 3,590 pounds of plastic, according to Blowfish Malibu’s site. Alongside that launch, the brand is also reducing the use of plastic in its packaging and donating money to Oceana, an advocacy organization dedicated to ocean conservation.

When it came to communicating these initiatives to the consumer, Bueno said the brand knew it had to be honest and authentic, that it couldn’t just one day tell its customers “Hey, here’s a collection, we’re all good now, we’re eco-friendly.”

Bueno discussed sustainability and Blowfish Malibu’s 4Earth platform earlier this month in a panel discussion with sustainable leaders and influencers.

Alex Gamboa Grand co-founded Good Intent, an online marketplace spotlighting eco-friendly products. “At this point I think most people agree that climate crisis is a huge problem, they want to do something about it, but they just don’t know exactly what they can do,” Grand said. For many, she noted, things like the zero-waste movement can feel out of reach, or only for people of privilege. The goal of Good Intent, she said, is to make it easier on consumers to make the small changes that, together, add up to a larger impact.

Bueno said ensuring accessibility was one of the big things Blowfish Malibu considered when creating its 4Earth line. “We wanted to take away the stigma that it was for someone privileged or you had to pay more money for it,” she said.

As a sustainability vlogger who spends much of her time advising her followers on how to buy responsibly, Shelbi Orme offered some insight into how she identifies whether a brand is truly eco-friendly or not. One of the first things she said she always tell people is to look for an “About Us” section. “If a brand has something good to say they’re going to tell you and if it’s harder to find, or if it’s not included, there’s probably a reason for that.” She also identified B Corp certification and recycled materials as two other top indicators.

While Blowfish Malibu’s 4Earth platform just rolled out last year, its sibling brand Allen Edmonds’ Recrafting initiative has been around for more than three decades.

The program, available for 90 percent of Allen Edmonds’ styles, recrafts between 55,000 and 75,000 pairs per year, according to Keith Duplain, Caleres’ president, St. Louis Branded Portfolio. In 2016, he noted, the brand surpassed 1 million recrafts. The company’s website claims the program has saved more than 500,000 pairs of shoes from landfills in the past 10 years. 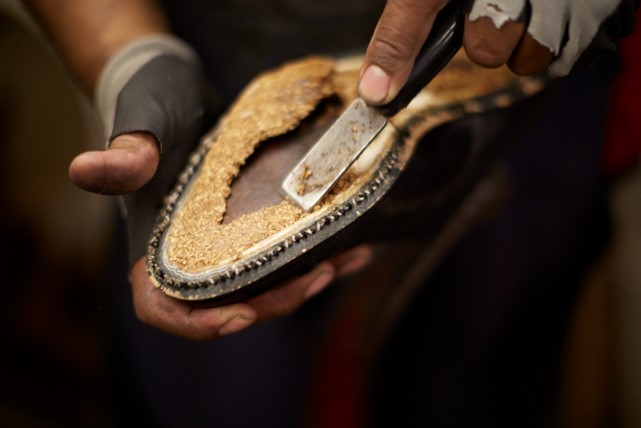 Allen Edmonds splits its Recrafting program into four tiers, including a new package for select sneaker silhouettes. The most expensive of these options, priced at $155, includes new outsoles, leather heel bases, toplifts, cork-inlays, welting and laces; upper refinishing and polishing; a shoe polish; and pairs of flannel shoe bags and cedar shoe trees. For an additional $20, the brand will change the sole.

Though it depends on the frequency of use, Duplain said, the brand has seen shoes last for three generations thanks to recrafting. “It is not unusual for a customer to send back a pair that belonged to his father or grandfather to be recrafted so he can wear them again,” he added. And while most shoes can typically be recrafted twice, he said a pair can go through the process a third time on rare occasions.

Unsurprisingly, interest in Allen Edmonds’ Recrafting program has followed broader trends in dress footwear during the pandemic. However, as people begin to return to social events and offices, Duplain said he expects the brand will see an uptick in interest and orders.

Allen Edmonds is not the only footwear brand giving old shoes a new life. Nike launched its new Refurbished program at eight outlet stores nationwide last week. Unlike Recrafting, however, the initiative will collect used shoes for the brand to spruce up and sell to other consumers at a reduced price. According to a Nike spokesperson, the circular program could give millions of pairs of shoes a second life.