Previewed Wednesday, the campaign will explore how each of its three stars is “a force of nature.” The boots at its center—the $1,295 Snow Mantra winter boot and the $750 Journey hiking boot—are scheduled to drop Nov. 12 in North America. President and CEO Dani Reiss described their upcoming launch as “one of the most significant milestones in our more than six-decade history.”

“We are bringing a completely new perspective to the category, balancing performance and luxury—which is the ultimate expression of our lifestyle brand,” Reiss said in a statement. “A ‘force of nature’ is strong, dynamic and confident—all characteristics that Canada Goose enables.”

Shot in Squamish and Whistler, British Columbia, the campaign profiles Canadian Anishinaabe activist Sarain Fox, former NHL player and suicide prevention advocate Jordin Tootoo and David Beckham’s son Romeo Beckham. Canada Goose will explore their stories through the lens of its larger “live in the open” campaign, with the environment and weather driving their “force of nature narrative” forward, it said.

“I have made it part of my life’s work to amplify the voices of women and advocate for my community,” Fox said in a statement. “I feel empowered when I’m telling their stories, championing their work and supporting their mission. I want to change the world—especially for our future generations. Live in the Open inspires me to be vocal, true to myself and to lead by example, especially now with my daughter watching and learning from me.”

Beckham, a recent addition to the Fort Lauderdale, Fla. professional soccer team, is likely the campaign’s highest-profile star, with roughly 3.1 million followers on Instagram. On Wednesday, a short post mentioning Canada Goose racked up more than 58,00 likes in a matter of hours.

“Growing up, I have always been taught that hard work pays off. To make my dream of playing professional football a reality, I was focused and dedicated,” Beckham said in a statement. “To me, Live in the Open means pushing forward and being motivated to achieve great things. I am excited to be teaming up with Canada Goose to inspire that idea.” 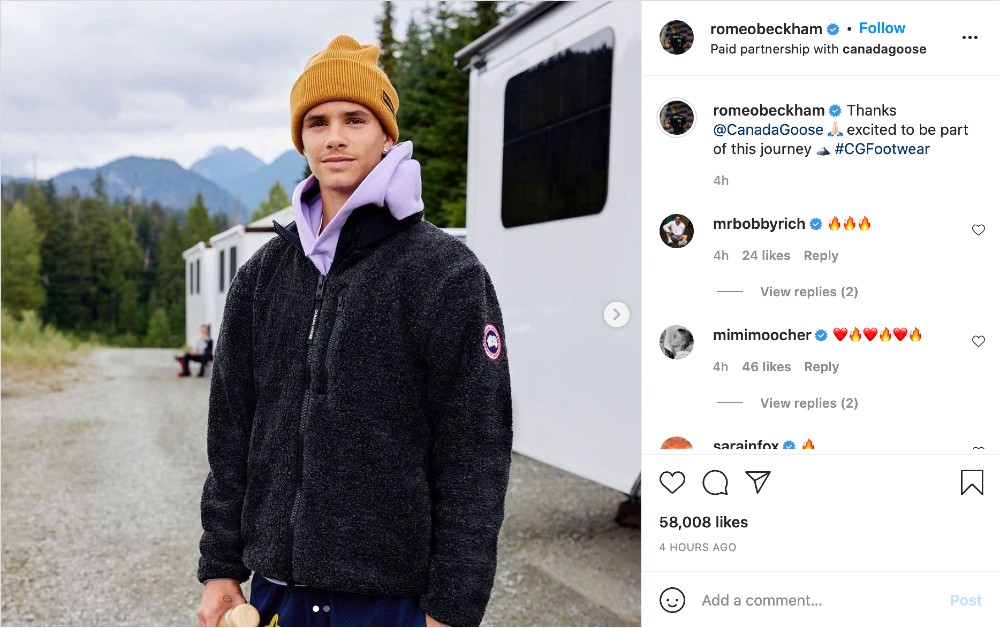 The two boot styles at the campaign’s center will debut Nov. 11 in Asia-Pacific and Nov. 12 in North America and Europe, the Middle East and Africa. Inspired by Canada Goose’s best-selling Snow Mantra jacket, the Snow Mantra winter boot will feature zippers, draw cords and i-cords for quick fit adjustment, as well as PrimaLoft Gold insulation to keep feet warm in temperatures as low as -30 degrees Celsius and a grippy lug outsole. The Journey hiking boot will sport a deep tread design, a protective rubber bumper and seamless three-piece uppers that reduce potential abrasion. Both silhouettes will be available at the brand’s more than 35 stores, on its e-commerce site and at select wholesale partners.

The footwear launch arrives months after Canada Goose announced it would stop manufacturing with fur altogether “no later” than the end of 2022. It expects to phase out the purchase of fur by the end of the current year. Though People for the Ethical Treatment of Animals (PETA) has hailed the move—it plans to still push for Canada Goose to stop using down—it is less clear whether consumers have heard the news.

“Canada goose is known for killing animals in a horrid manner to obtain materials needed to make said cost. Sad you support them,” wrote an Instagram user in response to Beckham’s post Wednesday. “I love how he looks like his dad 🔥❤️ but don’t support animals killing if that’s what they do at [Canada Goose],” wrote another. Neither comment, however, received much love from other users—particularly compared to the tens of thousands of likes Beckham’s original post garnered.