A partnership with Crocs—which has become a bona fide stable of high-profile celeb collabs—launches Tuesday, giving shoppers a chance to “walk on the weird side.” The new capsule collection plays on psychedelic motifs and bright hues for a new take on Crocs’ classic clog and classic sandal, complete with custom Jibbitz charms.

The clog features a swirled pink, blue and yellow paint-look graphic punched up with light-up, three-dimensional mushroom-shaped Jibbitz charms, the brand said. Meanwhile, the Diplo x Crocs classic sandal represents the clog maker’s first ever collaboration on the two-strap silhouette, which features a yellow, orange and blue paint-inspired pattern. The style comes complete with a range of eight glow-in-the-dark Jibbitz charms featuring a walrus listening to headphones, a colorful mushroom and the Los Angeles DJ’s logo.

Not unlike the brand’s former collaborators, including Justin Bieber and Post Malone, Diplo claims he’s been captivated by the unassuming foam clogs, now a part of his daily uniform. “I wear my Crocs literally everywhere,” he said in a statement about the collection’s launch.

“I’m stoked to have some with my name on them and that others can get them too,” he added. “Crocs helped me bring my adventures to life with these designs and the 3D, light up and glow-in-the-dark mushroom Jibbitz charms are cooler than I could’ve imagined.”

Fans were first introduced to Diplo’s line during a livestreamed performance on Thursday on record label Mad Decent’s Twitch channel. The set was orchestrated to mimic the nature-inspired look and feel of the collection, Crocs said, and 1,000 pairs of classic clogs and sandals were gifted to lucky fans who happened to tune in.

“Working with a genuine brand fan in Diplo inspired a new level of creativity, including the first-ever celebrity take on the Classic Crocs Sandal with glowing Jibbitz charms that will help fans stand out even in the dark,” Heidi Cooley, Crocs’ senior vice president and chief marketing officer, added. “Our collaborations are more than a moment in time. At Crocs, we’re focused on creating engaging experiences that bring fans along for the journey.”

The high-fashion set is already abuzz with news of Crocs’ latest controversial collaboration with Balenciaga, which debuted at the fashion house’s Spring 2022 runway show on Sunday. Models walked the runway in never-before-seen Crocs silhouettes like knee-high boots, platformed pool slides and stiletto clogs, which elevated the brand’s most recognizable silhouette with a rounded post-like heel. 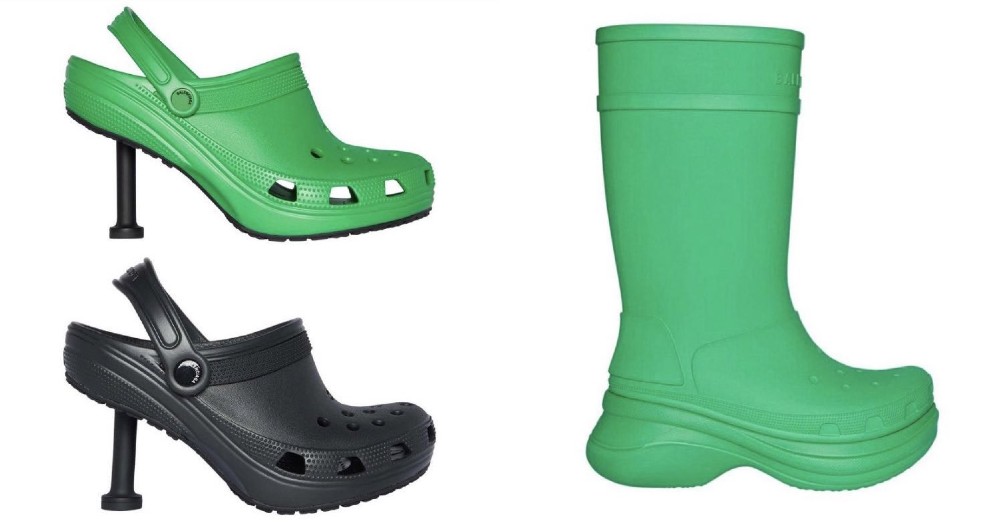 The exhibition, called “Clones,” was the brainchild of Balenciaga creative director Demna Gvasalia, who asked viewers to consider “our shifting senses of reality through the lens of technology.”

“We see our world through a filter—perfected, polished, conformed, photoshopped,” the show notes read. “We no longer decipher between unedited and altered, genuine and counterfeit, tangible and conceptual, fact and fiction, fake and deepfake. Technology creates alternate realities and identities, a world of digital clones.”

The collection featured Gucci dupes, like a shoulder bag bearing a slightly revised version of the Kering-owned label’s signature all-over print and “This is not a Gucci bag” scrawled across its side in graffiti lettering. Meanwhile, the unexpected reprisal of the Crocs partnership—which first debuted at Balenciaga’s Spring 2018 runway show with a line of platform clogs—was in itself a modified “clone” of the brand’s past work.

“oh no, are those shoes the new Balenciaga x Crocs collab?? I can’t,” wrote Twitter user @_gwonji wrote. Still, some fans of the labels proved more open to the unorthodox styling. “Balenciaga crocs are back it’s a good day,” @Notblk tweeted.