Shein may be leveraging its rapid Western growth into an IPO later this year, but the Chinese fast-fashion e-retailer may need to clean up its act if it wants to win over investors and eagle-eyed consumers alike.

A flurry of intellectual property complaints is at the heart of claims that Shein’s recent success—the retailer is valued at more than $15 billion, according to Chinese tech media outlet LatePost—has been aided by willing trademark infringement.

AirWair International, the manufacturer of the iconic Dr. Martens boot, filed a lawsuit against Zoetop Business Co., Limited, which does business as Shein and sister retailer Romwe, in November last year. In the court filing, AirWair alleged: “ZoeTop has marketed, distributed and sold shoes and boots that are direct and obvious copies of the distinctive AirWair Trade Dress, Jadon Trade Dress, and features described in the AirWair Trademark Registrations in violation of AirWair’s rights.”

Twenty-six distinct alleged infringing styles were highlighted in the filing, including a “Men Lace-up Martin boot” similar to Dr. Martens’ classic leather boot, a white “Lace-Up Front Combat Boot” that looks similar to the Dr. Martens “Jadon Boot,” as well as a heel tab on its “Slogan Ribbon Decor Patent Chelsea Boots” visually similar to the one seen on the AirWair with Bouncing Soles.

AirWair said the infringing styles were offered for sale, advertised, and promoted on both the Shein and Romwe e-commerce sites.

AirWair said it notified ZoeTop of its infringement claims and detailed four intellectual property rights in multiple cease-and-desist letters from December 2019 to July 2020, “strongly urging” the Shein parent to stop selling the copy footwear. Yet even after the letters were sent, the company continued to sell numerous styles that blatantly use the distinctive “trade dress” and trademarks of the AirWair and Jadon footwear.

The trade dress, which Airwair calls the “DNA” of the Dr. Martens footwear brand, features yellow stitching in the welt area of the shoe, a two-tone sole edge, a grooved sole edge, the distinctive “DMS” sole pattern and angled heel and a fabric heel loop.

“Such action demonstrates a clear intent to sell counterfeits,” the suit alleges, with Airwair also pointing out that Zoetop is “using AirWair’s photographs of genuine Dr. Martens footwear in order to entice customers to its website to buy fake copy footwear.”

The counterfeiting is so transparent, according to the plaintiff, which filed the suit in the Northern District of California, that it said customers post comments about Dr. Martens on product pages on each site.

In February, Zoetop outright denied all of AirWair’s allegations. On March 26, the court stated that the parties are “still optimistic” that they can settle this matter. The court ordered that mediation be completed by June 24.

The AirWair lawsuit follows a similar case from 2018, when Shein was sued by Levi Strauss over allegations it had copied the jeans company’s “arcuate” stitching pattern usually seen on the back pockets of its trademarked jeans. The case ended with an undisclosed settlement.

One small direct-to-consumer earring brand, Los Angeles-based Kikay, was alerted of its designs being sold on Shein by a customer on social media. Quinn Jones, Kikay’s co-founder, posted a message on Instagram that illustrated the product on Shein alongside one of its original designs. The post garnered more than 1,000 comments, some of which were from other small fashion retailers experiencing similar issues. 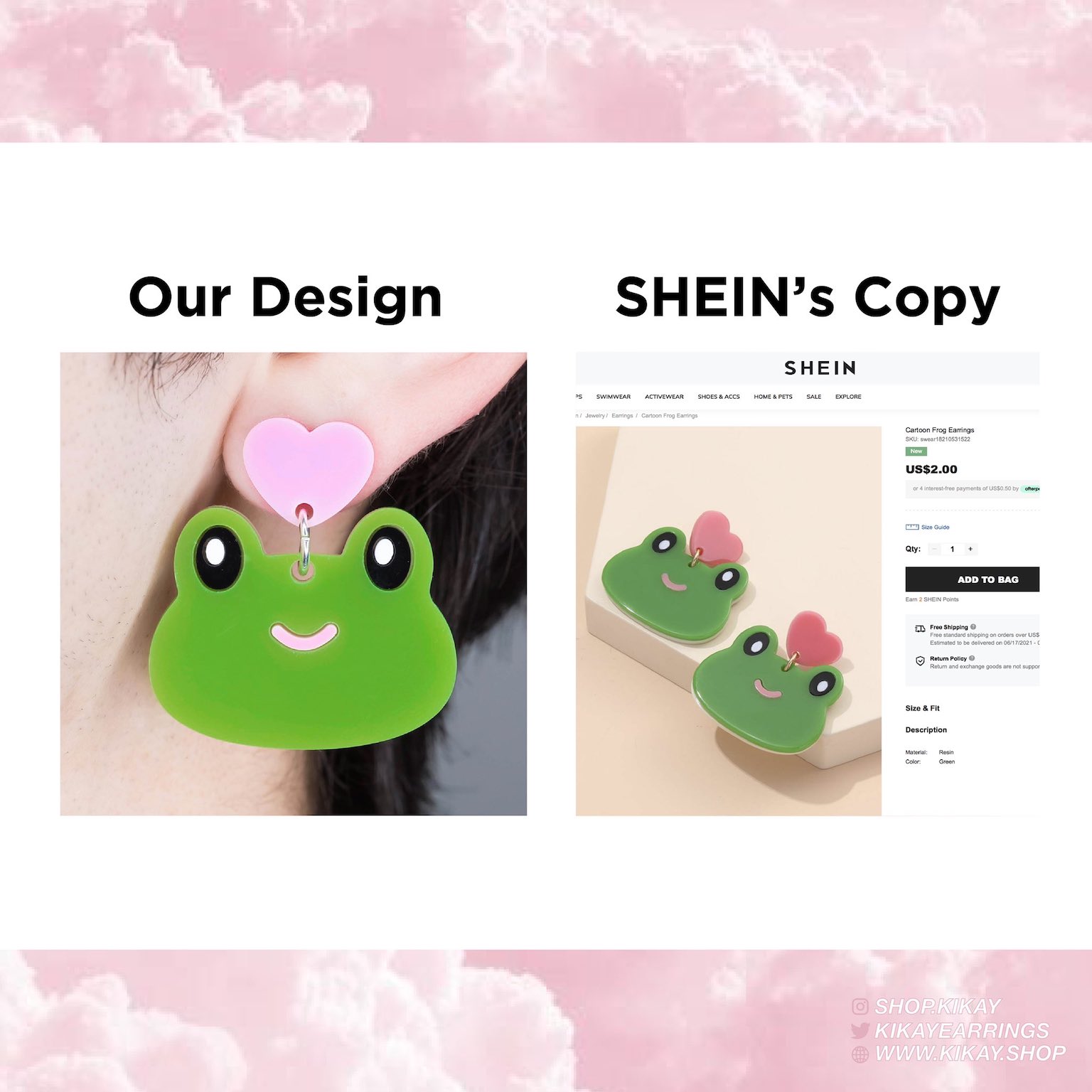 “Shein is notorious for stealing from small creators and selling their designs price well below the price they would be if they were produced with ethical labor,” Jones wrote.

“It happens again and again,” Jones told the Financial Times. “It’s on Shein to do the due diligence, because until they stop running their business this way, they’re just continually hurting small businesses, people trying to support themselves.”

Jones said Shein eventually sent him a direct message, promising to remove the product, apologizing for the “inconvenience,” and pledging to no longer work with the supplier that produced the copied item.

Jones’ point about ethical labor comes as Shein draws concern over its labor standards. The company’s popularity was able to skyrocket largely due to its ability to turn fashion trends into cheap products only in a matter of days, including tops that often go for less than $10 and even dresses that sell for under $20. And while Shein says it controls its own production chain, including design, procurement and manufacturing, it also works with third-party vendors.

Operationally, very little is still known about Shein, which reached the top of the app download charts for shopping in May on both Apple and Google’s stores, beating Amazon, according to mobile app tracking firm App Annie. In December 2020, the retailer said that it generated 65.3 billion RMB (nearly $10 billion) in total sales.

Shein’s popularity appears to come largely from the highly desirable Gen Z demographic. A Piper Sandler survey of 7,000 U.S. teens with an average household income of $76,750 found that the fast-fashion retailer ranked second after Amazon as their most popular shopping website.

Intellectual property issues within fast fashion are unfortunately not uncommon as companies like Shein aim to turn new products on a dime. Over the past five years Los Angeles-based fabrics company Unicolors, Inc., has been in a back-and-forth battle with H&M over claims that the Swedish fast fashion giant infringed on one of its copyrighted patterns.

Unicolors originally sued H&M in April 2016 for selling garments it said had an “identical, or substantially similar” pattern to one it had copyrighted in 2011. A California jury decided in Unicolors’ favor in 2017, awarding it damages of nearly $850,000. In 2020, however, the U.S. Court of Appeals for the Ninth Circuit reversed the decision, ruling that the fabric firm included “known inaccuracies in its application for [copyright] registration.”

Five months after Unicolors submitted a petition to the Supreme Court to take up the case, the court agreed to hear it. The case is slated for the court’s upcoming term, which is scheduled to begin Oct. 4.