Deckers Brands ramped up its Hoka marketing efforts Wednesday, launching what it referred to as “the brand’s most extensive globally integrated marketing campaign to date.”

The campaign will feature “a strong visual language” utilizing the “bold” colors of its product offerings and “elevat[ing]” Hoka’s bird logo, it added. Its first ad spot, a 60-second “anthem film” entitled “Pursuit,” depicts a group of runners racing through a magical world filled with bright, phosphorescent colors.

Hoka has timed the Fly Human Fly launch to the debut of its Mach 5 running shoe. The brand described the latest iteration in its Mach franchise as a “race-ready, performance-driven running shoe” that strikes a “perfect balance between speed and comfort.” An ancillary marketing campaign will complement the launch.

The brand will also spotlight several nonprofits, starting with Achilles International, a group that encourages people with disabilities to participate in athletics. Hoka said it will further its new partner’s mission through monetary and product donations. An Instagram post published Wednesday highlights the nonprofit’s work, as well as that of the all-terrain wheelchair maker GRIT; Trail Sisters, a community dedicated to growing female participation and opportunity in trail running and hiking; the running community Strides; the outdoors-centric website and app Outbound Collective; and RUNGRL, a digital media and event platform for Black women.

Is Poshmark Spending Too Much on Marketing? 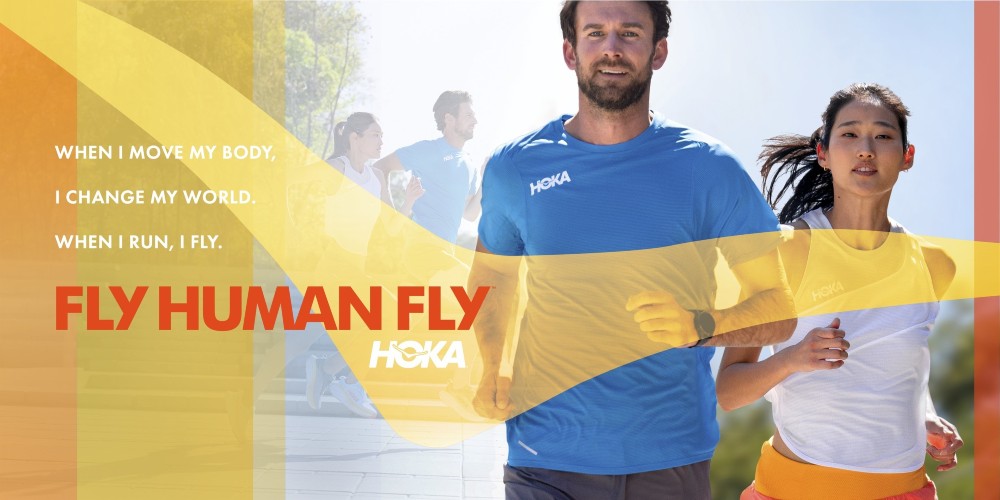 “When a consumer tries a Hoka product, they fall in love with our product innovation that delivers an experience that is both easy on the body and world class fast,” Norma Delaney, vice president of global marketing at Hoka, said in a statement. “Thus, the brand [was] growing primarily by word of mouth up until this point. Those that know us, are fans for life. The Fly Human Fly global campaign is an invitation for humans everywhere to experience Hoka and fly into a world of new possibility.”

Speaking with investors about Deckers’ latest earnings report last month, David Powers, the company’s president, CEO and director, noted that while wholesale remained the “primary” acquisition point for new consumers, Hoka’s digital marketing activations were also driving direct-to-consumer acquisition with “targeted consumers.” Its digital tactics, he said, were responsible for growing the brand’s mix of 18- to 34-year-olds by 2 percentage points over the prior year and 6 percentage points over two years earlier.

Though the company expects SG&A to once again land around 34 percent of revenue in the current fiscal year, Fasching said Deckers will see higher absolute spending, including due to increased marketing “to build global Hoka awareness and broaden the brand’s consumer appeal.”