The shoe is vegan and incorporates a slew of reclaimed content, including an upper made from 100 percent post-consumer recycled plastic bottles, a midsole that features 5 percent reground ethylene-vinyl acetate and a partially recycled insole that includes castor oil, recycled foam and recycled rubber.

New Balance crafted its faux leather—which it called a “benign alternative” to traditional cowhide, though both versions have equally vociferous detractors—by layering polyurethane onto a thin base made from 60 percent recycled polyester.

For visibility at night, the NB for Jaden Smith Vision Racer includes reflective details on the tongue webbing, N logo and upper. Other elements include a rubberized tip for extra durability (a nod to Smith’s lifestyle of performing and skateboarding) and a chunky iced outsole with the words “Vision” printed across the treads.

Smith’s iconoclast approach to fashion and music, along with his philanthropic and environmental efforts, exemplify the New Balance brand of “fearless independence,” according to Chris Davis, chief marketing officer and senior vice president of merchandising at New Balance.

“Shared values of transforming the status quo; staying true to oneself; giving back to community; and respecting heritage while co-authoring a distinct future, are the foundation of the relationship between New Balance and Jaden Smith,” Davis said in a statement.

The shoe’s use of sustainable and vegan materials, he added, have propelled the New Balance supply chain further and helped accelerate the brand’s timeline to deploy more of the same throughout its lineup.

The NB for Jaden Smith Vision Racer will launch on July 24 in a Wavy Blue colorway and the suggested retail price of $150 at newbalance.com and select retail locations worldwide. Additional colors will roll out throughout the year. 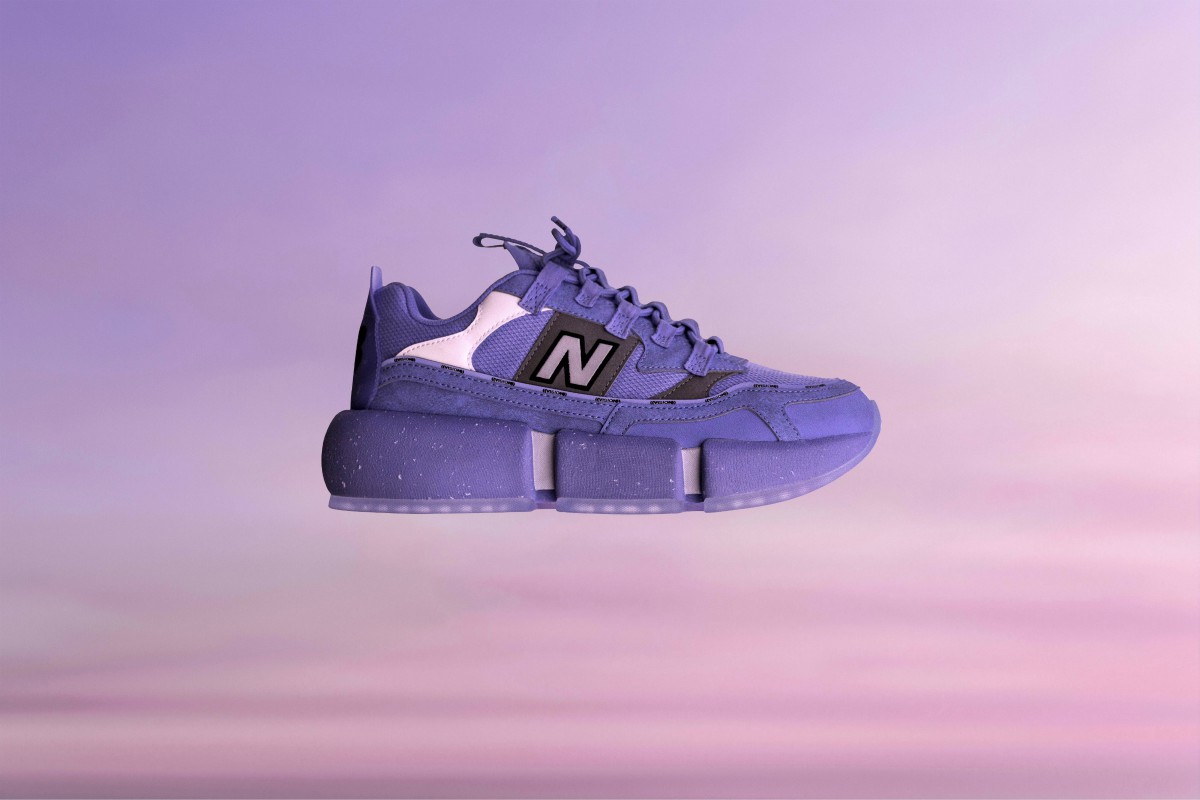 The shoe isn’t New Balance’s first foray into eco-friendlier footwear. The brand was experimenting with “environmentally preferable” materials such as rice-husk fillers and water-based glues as early as 2009, though it has lagged behind the likes of Adidas and Nike in making significant and enduring better-for-the-planet changes.

In October, the brand linked arms with It Girl fave Reformation to create the latter’s inaugural sneaker collection, featuring chrome-free suede and Bloom’s algae-based foam. The following month, leaning into the ugly-shoe trend, New Balance cobbled together footwear scraps from its cutting-room floor into a limited-edition series of patchwork-like, one-of-a-kind kicks.