It took two Australians to create the quintessential Los Angeles shoe line, Mara & Mine. When L.A.-based Aussies Jasmine Yarbrough and Tamie Ingham set out to create a footwear line that combined Yarbrough’s off-duty model style with Ingham’s professional stylist eye for fashion, the designing duo tapped into an aesthetic that encapsulated California’s cool, casual and edgy style. And the bonus? Their showpiece was neither a sneaker nor a flip flop.

In 2012, Yarbrough and Ingham struck footwear gold when they paired a preppy smoking slipper silhouette with an embroidered skeleton foot on the front. The shoe, manufactured in Los Angeles and offered in a host of colors and upper materials, landed on the feet of celebrities, further cementing smoking slippers as the hip alternative to the heap of ‘twee ballet flats and tailored oxfords on the market at that time and the brand as a must-have among L.A.’s cool girls. 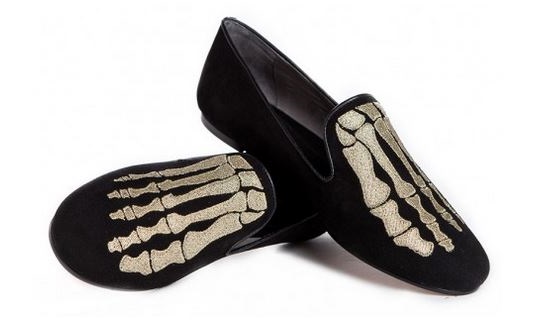 That rapid success, amplified by social media and celebrity websites and magazines, propelled Mara & Mine to expand its selection to include sandals, sneakers, oxfords, boots, men’s, children’s, handbags and more.

Vamp caught up with the designers and dished about their latest partnership with artist Raif Adelberg, the appeal of customizable footwear and how famous fans have helped the brand break into new markets.

Yarbrough sees an opportunity for fashion footwear brands to take a cue from the athletic category and to broaden their customizable options. “Consumers like options and often if you have a favorite shoe you want it in an array of colors,” she said.

The company launched a customization site a year into business, offering consumers a chance to play designer and add a personal touch to their footwear. “We saw it as a creative outlet for our consumers to design different color combinations and embroidery patterns on our popular slipper,” Ingham explained.

Monogramming is a given for a brand that specializes in such classic silhouettes like smoking slippers, but Mara & Mine spices up its customization options by allowing shoppers to select everything from the upper materials (velvet, suede, linen, denim, pebble grain to name a few), embellishments (metal bit or tassel), embroideries (fleur de lis, anchors, dice and more) all the way down to the color of the shoe’s leather sole.

Yarbrough noted that she sees equal relevance of men and women wanting to personalize their shoes.

This summer Mara & Mine collaborated with artist Raif Adelberg on a range of statement-making shoes. The line of black and white slip-on sneakers and velvet slippers features Adelberg’s signature “F**K I Love You” motif. A made-to-order anaconda option is available for $1,320.

Ingham admits the bold declaration of love has not been everyone’s cup of tea. “Our response on our e-commerce site has been great. Everyone loves the shoes and the badass vibe, however, some stores and editorial have been a little shy of the swear word.” 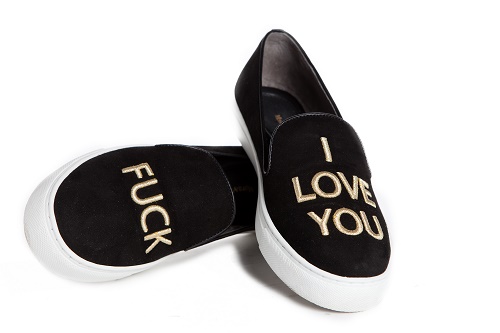 Regardless of how much editorial the line garnered, the designers said the collaboration was the right fit for the brand. Along with creating buzz about the brand, Yarbrough said collaborations incite creativity.

“Collaborating with different brands allows us to reach a wider audience and it also allows us to create and experiment with our own designs expanding into new ideas. Working with new and talented designers is always exciting,” she explained.

Who needs editorial when you have the potent combination of social media and star power? Mara & Mine has landed on the radar of both retailers and consumers thanks to the celebrity following of its slippers, including Kendall Jenner, Cara Delevingne, Jessica Alba, Julianne Hough, Diana Agron and more.

And more often than not, Ingham said the company sees a bump in sales of styles worn by celebrities. It just depends on the individual’s following and demographic of fans, she noted. “With fashion models who have fashion savvy followers, we always see a spike in sales, but when it comes to reality TV stars who may have a younger audience, we have noticed that instead of sales we get a spike in social media followers,” Ingham explained.

When Delevingne and Jenner were spotted sporting Mara & Mine’s skull slipper, Yarbrough said the brand saw interest from different stores and accounts. She added, “We definitely noticed that celebrities have attracted certain international retail partners. They have mentioned that their customers like to see ‘entire looks’ and how celebs wear outfits [and] what they style their shoes with.”