MSCHF is teaming with late night host Jimmy Fallon for its latest sneaker—a gobstopper-inspired skate shoe designed to be scuffed.

Like the jaw-breaking sweet that serves as its muse, the Gobstomper features multiple colorful layers that can be worn away one after the other. Instead of licking through strata of sugar, however, owners are invited to wear down the $195 skate shoe’s upper and outsole with time and use.

“I always wanted to have my own sneaker,” Fallon said on Monday’s episode of “The Tonight Show.” “I’ve talked to a bunch of people about doing stuff in the past, but then I met these geniuses over at MSCHF…. We talked to [co-founder and chief revenue officer] Dan Greenberg… and we were talking about all these dumb ideas and I go ‘Look, if I’m going to make a shoe, it’s got to be different. It’s got to change the game. It’s got to be something totally different.’”

Slated to drop Wednesday in what Fallon described as a “24-hour draw,” the Gobstomper features a white suede upper positioned over three layers of colored microfiber paneling. The sneaker’s rubberized outsole similarly consists of four different layers—white on the outside, followed by blue, yellow and red. The shoe also sports MSCHF’s triple-exclamation point logo on the tongue, the MSCHF Sneakers foot logo on the outsole and back heel, and the MSCHF word mark on the rear sidewall.

“Destroyed stuff is in… but you’re ripping yourself off if you pay for a pre-distressed shoe,” the Gobstomper’s product description reads. “Instead, rip it up yourself…. If you don’t wear your shoes down fast enough, learn to skate.”

A banged-up Fallon stars throughout the sneaker’s promotional materials. Like April’s “not a skate shoe” Wavy Baby, the Gobstomper campaign makes heavy use of skateboarding imagery—including to spoof the popular “How do you do, fellow kids?” meme.

What to Know About MSCHF's $500 'Made in Italy' Handbag 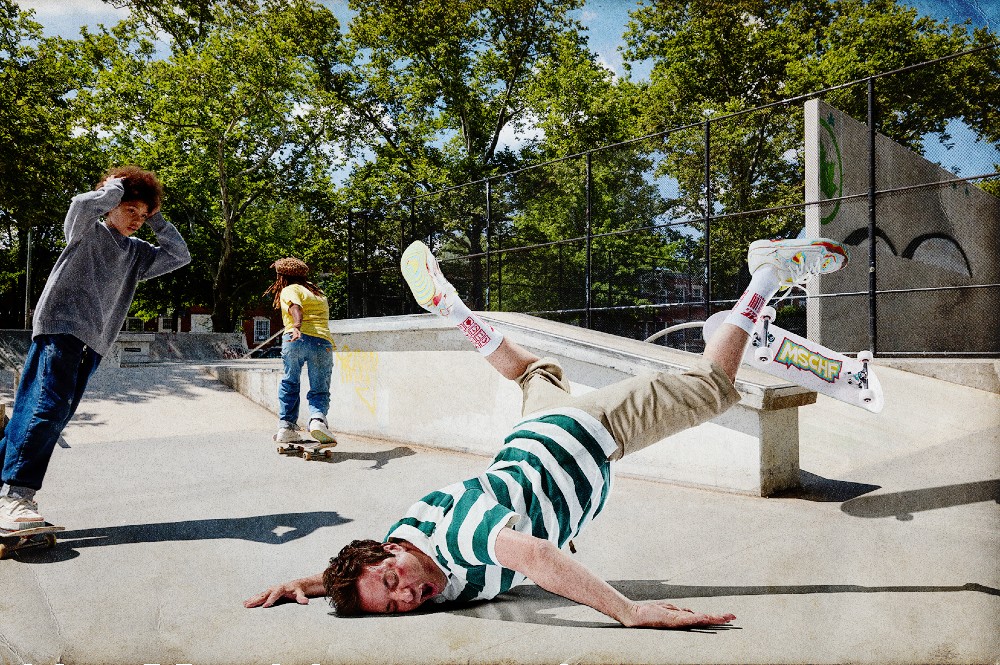 “This is a sneaker, so don’t eat it,” MSCHF wrote. “Instead, eat sh*t in it—and every time you fall it will become more colorful.”

In true MSCHF fashion, the Brooklyn-based provocateur appears to have drawn inspiration from an existing brand. This time, instead of pushing the buttons of high-profile sneaker giants like Nike and Vans, MSCHF aped the stylized logo of Ferrero’s “Charlie and the Chocolate Factory”-inspired Everlasting Gobstopper. 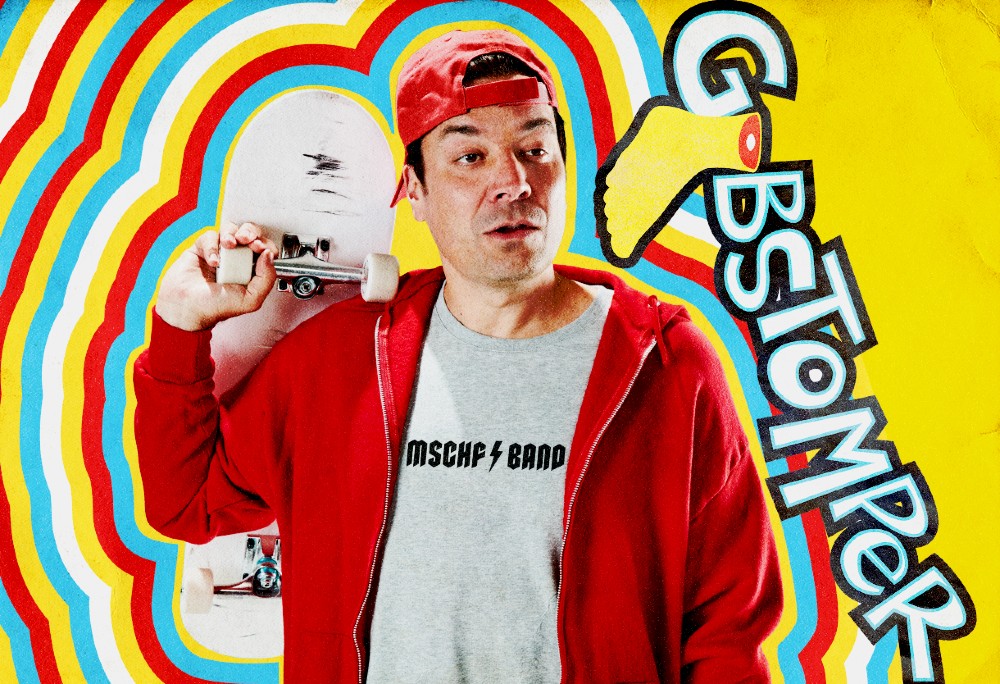 Though MSCHF’s “Gobstomper” clearly emulates how Ferrero—the Nutella maker bought the candy’s long-time owner Nestlé in 2018—styles the word “Gobstopper,” the food and drink corporation does not appear to own a trademark with which it could claim infringement. The United States Patent and Trademark Office only lists four live trademarks that include the word gobstopper, three of which are owned by Ferrero’s Ferrara Candy Co. Corp. None depict the disjointed type face featured on Everlasting Gobstoppers today.

Like pushing the envelope on trademark infringement, collaboration has become a recurring element of MSCHF’s now-regular footwear releases. Last year, it collaborated with Lil Nas X on its now-infamous Satan Shoes. In April, it teamed with Tyga to release the warped “Wavy Baby.” In each case, the musician quietly donned the shoe in a corresponding music video and promoted the collaboration on social media. 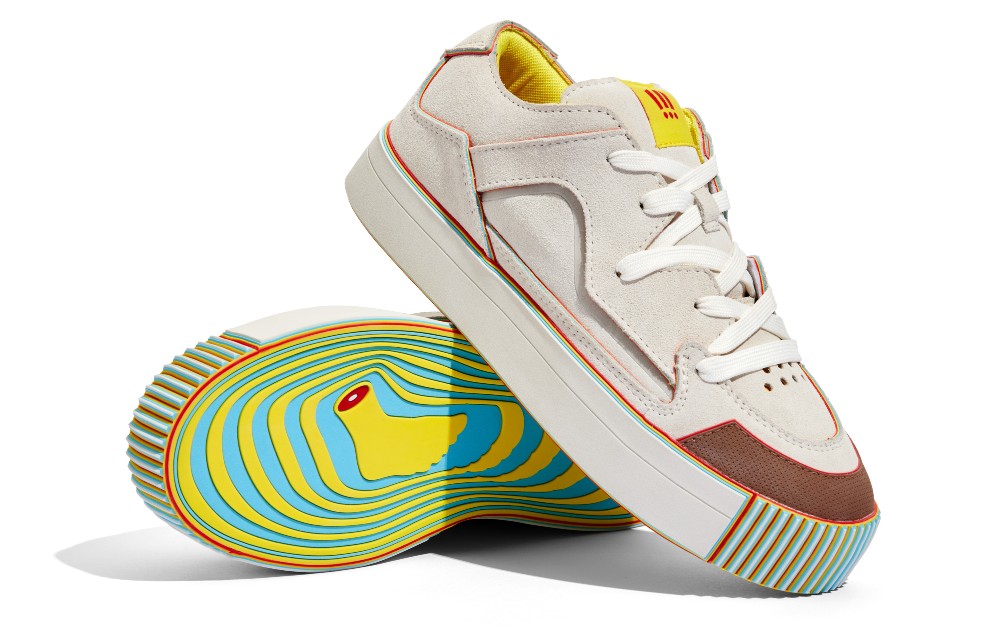 Thanks to Fallon’s “Tonight Show” platform, the comedian was able to announce and promote his MSCHF collab straight to his TV audience for roughly three minutes straight. The segment has racked up more than 36,000 views on YouTube. The former “Saturday Night Live” cast member also promoted the release on social media, including twice on Instagram, where he has 22.5 million followers. Tyga and Lil Nas X have 35.5 million and 12.5 million Instagram followers respectively.

Though roughly three months have passed since MSCHF dropped its Old Skool-inspired Wavy Baby sneaker, the art collective is still in court fighting Vans’ allegations of infringement. The two companies are now trading arguments on multiple legal fronts, including the validity of a preliminary injunction and whether or not MSCHF violated that injunction.

Despite Fallon’s dreams of doing something “totally different,” Nike dropped a similar concept shoe last month. Released as part of the brand’s Pride-themed “Be True” collection, the Nike SB Be True featured a white upper that “rubs away to reveal an array of color beneath.” Unlike the Gobstomper, which uses four different layers which must be physically worn away, the Nike sneaker simply features a removable—owners can either rub it away on purpose or allow for natural wear—layer of white on top of a single, multi-colored base.