Despite outrage and condemnation from a host of pundits and politicians, Lil Nas X’s so-called “Satan Shoes” sold out all 665 pairs—the 666th will be given away Thursday in a lottery—in less than one minute Monday.

Perhaps the most distinctive element of the already unique shoes is the red liquid injected into the shoe’s soles. Though largely ink, the fluid reportedly includes a drop of human blood. According to ABC News, MSCHF staff provided the blood themselves. The Jesus Shoes, by comparison, were described as being filled with “holy water” from the River Jordan.

The Satan Shoes also feature a pentagram pendant attached to the front laces, inverted cross details, a reference to the Bible verse Luke 10:18—“And he said to them, “I saw Satan fall like lightning from heaven”—and pentagram graphics on the insoles. Listed at $1,018, the footwear came in slightly cheaper than MSCHF’s Jesus Shoes, which were originally priced at $1,425.

Many in the Twitterverse and elsewhere have responded to Lil Nas X’s Satan Shoes with outrage. Nike, as the brand behind the Air Max 97, has received a sizeable share of the backlash. The footwear titan, however, says it had nothing to do with the sneakers.

“We do not have a relationship with Lil Nas X or MSCHF,” the brand said in a statement. “Nike did not design or release these shoes and we do not endorse them.” 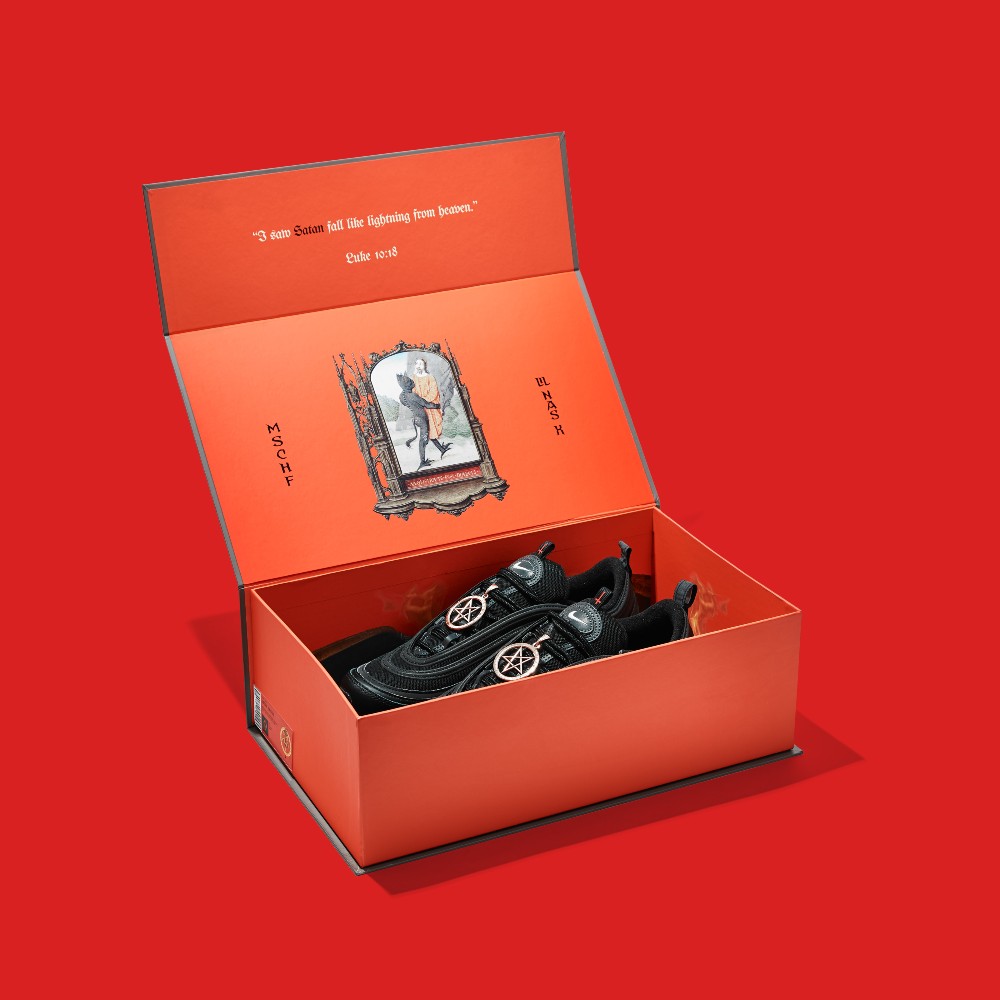 Perhaps one of the most high-profile figures to criticize the Satan Shoes has been South Dakota Gov. Kristi Noem. “Our kids are being told that this kind of product is, not only okay, it’s ‘exclusive,’” Noem tweeted on Sunday. “We are in a fight for the soul of our nation. We need to fight hard. And we need to fight smart. We have to win.”

“ur a whole governor and u on here tweeting about some damn shoes. do ur job!” Lil Nas X responded.

The Satan Shoes arrive three days after the debut of Lil Nas X’s “Montero (Call Me By Your Name)” music video, wherein in the singer at one point descends into hell and gives a devil figure a lap dance. The video has garnered more than 34 million views on YouTube.

Though far out of reach for most consumers, the so-called Satan Shoes have nothing on the “Birkinstock” sandals MSCHF dropped in February. Made with real Hermès’ Birkin bags, the Birkenstock-inspired footwear ranged in price from a cool $34,000 to a whopping $76,000.