A year after its controversial Satan Shoes prompted a sensationally short-lived skirmish with Nike, MSCHF is returning its particular brand of tongue-in-cheek antagonism to footwear.

Unveiled Thursday, the art collective’s latest endeavor, MSCHF Sneakers, will see it release a new shoe roughly once a month. The first drop, described by MSCHF as a “winking riff on the image of an Air Force 1,” was produced overseas and will arrive March 21 at a cost of $220.

Though the firm has constructed the leather-clad Tap3 “from the ground up”—it used its own designs for the shoe’s sole, insole and upper, it said—it clearly references Nike’s ever-popular Air Force 1, relying on similar outsole and paneling designs. Wherever Nike’s logo might appear, however, MSCHF has placed “overmolded” TPU tape.

The Tap3 will ship in an orange box reminiscent of Nike’s standard shoebox. Like the shoes themselves, the box will be covered in strategically placed strips of tape. Each pair will come with a matching roll of MSCHF tape.

“The approximate shape of the AF1 has become the platonic ideal of a low top sneaker,” MSCHF said. “The first thing every brand that’s trying to pivot into sneakers does is make a pseudo-AF1 with a star tipped [lightning] bolt, a flag, etc. where the swoosh would normally go. That cultural ubiquity makes it an attractive target for MSCHF to play with. And let’s be honest…it is a bit cathartic for us to launch this particular shoe almost exactly a year after the release of Satan Shoes.”

Though the Tap3, the Satan Shoes and MSCHF’s 2019 Jesus Shoes all drew on Nike designs—both the Satan and Jesus Shoes customized and resold actual Nike Air Max 97 sneakers—future releases will not play off the sneaker giant “for the most part,” MSCHF said.

“In some ways the entire MSCHF Sneakers program is us ensuring we can make whatever we want,” the firm said. “Part of MSCHF’s ethos is being off-platform (hence, we don’t make or distribute through social platforms and paid platforms) but that also extends to infrastructure. Jesus Shoes and Satan Shoes, by incorporating readymade objects as their base, were almost like on-platform sneakers.”

MSCHF will aim to release one footwear release per month on average, it said. Despite MSCHF Sneakers’ official branding, the collective will not limit itself to athletic footwear. “If it goes on a foot we will make it,” it said. And unlike its traditional release schedule, which has seen the brand release some sort of product every second and fourth Monday for years, MSCHF Sneakers might skip a month or do multiple shoes in one month. “For the most part it is safe to say we are releasing one new shoe a month,” it noted. 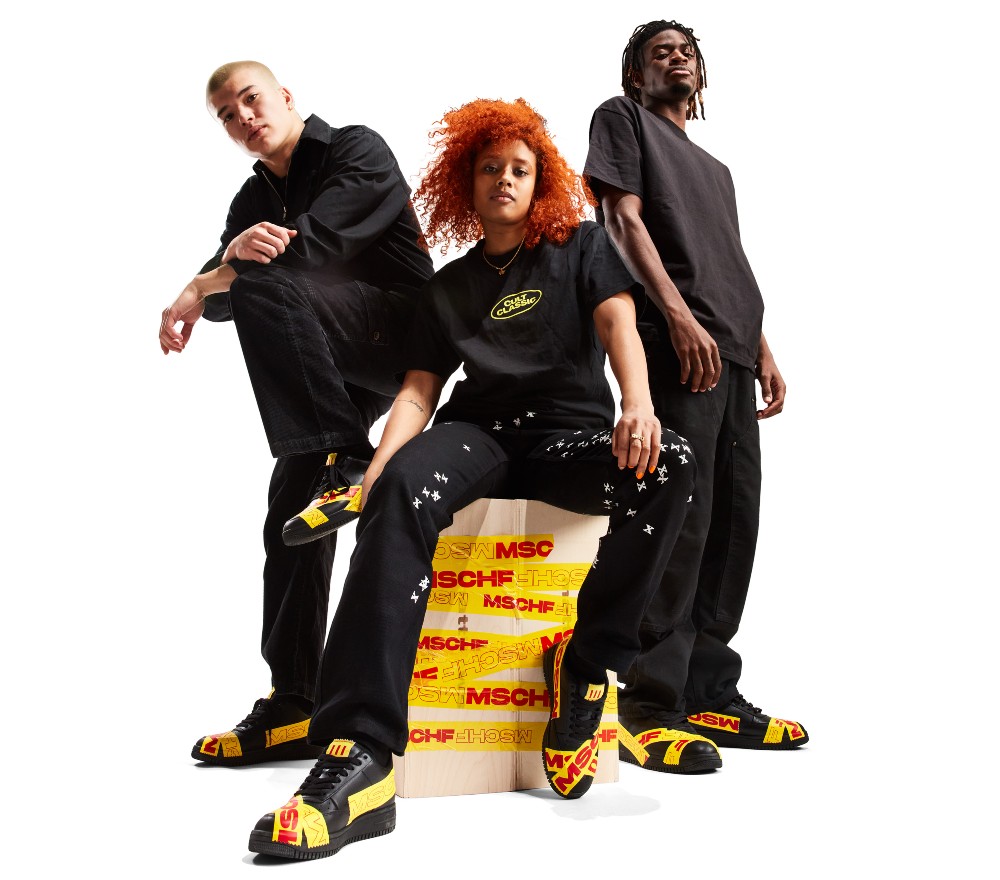 Prior to the Tap3, MSCHF’s footwear releases have only remixed other brands’ goods. In February of last year, for example, it used Birkenstock cork footbeds and Hermès’ Birkin bags to create what it called “Birkinstocks.” Prices started out at $34,000 and ran up to $76,000. Both the Jesus Shoes it released in 2019 and the Satan Shoes it dropped last year used Nike Air Max 97 sneakers, injecting them with holy water and a blood-infused ink, respectively, and decking them out in various themed details.

“Sneakers are a rich cultural format,” MSCHF said. “They sit at a strange nexus of fashion, collecting, hypebeasts, and investing—or more accurately whatever financialized mess sneaker flipping is. We knew there was more meat there we wanted to play with in the future, and after Satan Shoes it was clear we’d have to eliminate any outside dependencies to have creative freedom.”

Whether MSCHF’s latest shoe will invite another legal challenge from Nike is unclear. In both the cases the firm cited—A Bathing Ape’s Bapesta and a Tommy Hilfiger sneaker—the company has not pursued legal action. Another style sold by Walmart that was popularized on TikTok as a cheap AF1 lookalike has also dodged scrutiny. When Nike did sue a brand, Yums, for infringing on its Air Force 1 trademark in 2009, the Oregon company eventually backed down.

Just last year, though, Nike filed a new complaint again alleging infringement of its Air Force 1 trademarks. This time, it is targeting John Geiger, a designer whose shoes it alleges rip off its Air Force 1, and La La Land Production, the California-based manufacturer that allegedly produced the shoes.