New Balance is once again staring down a class-action lawsuit over its “Made in USA” claims.

The complaint, filed earlier this week, takes issue with seven specific sneaker models, six of which explicitly include “Made in USA” in their product name. It arrived nearly three years after New Balance paid out $750,000 to settle a similar “Made in the USA” lawsuit.

According to the suit, each of the sneakers include the words “Made in USA” printed on the tag on the inside of the tongue. “Made in the U.S. for over 75 years” is printed on the exterior of the box the shoes are sold in. In one case, a shoe that no longer claims the “Made in USA” name—the website explains that it is no longer produced in the U.S. as of April—still appears within the “Made in the USA” section of New Balance’s online store. 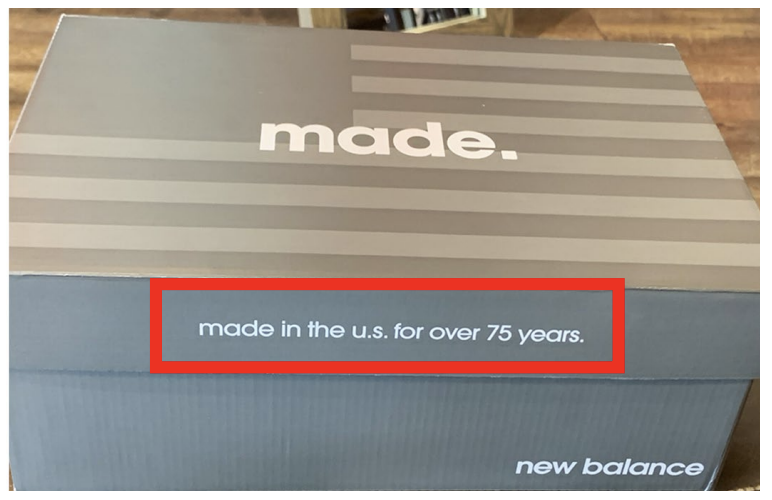 In each case, the lawsuit asserts that the Made in USA positioning is false and misleading, pointing to a note that appears online and on the underside of the shoes’ packaging stating that they “contain a domestic value of 70% or greater.” This amount, it alleges, does not meet the Federal Trade Commission (FTC) guidelines that “[f]or a product to be called Made in USA, or claimed to be of domestic origin without qualifications or limits on the claim, the product must be ‘all or virtually all’ made in the U.S.”

The FTC has clarified this rule to mean that all “significant” parts or processing must be of U.S. origin for a product to claim the Made in USA label. The lawsuit points to an example provided by the FTC of a table lamp that features American-made brass, an American-made Tiffany-style lampshade and an imported base. Though the base may represent a small percentage of the total cost, it would not be “far enough removed in the manufacturing process from the finished product to be of little consequence and it is a significant part of the final product.”

Using this standard, the complaint makes the case that New Balance’s footwear do not meet the FTC guidelines for a Made in the USA product. Specifically, it points to the shoes’ soles, which it suggests are foreign-made. Though New Balance does not offer any official details on what parts of its Made in USA shoes are made where, the suit highlights a 10-year-old interview where former New Balance CEO Rob DeMartini said the company imports its soles. It also cites a 2013 article from The Wall Street Journal which found that New Balance purchased its soles from Chinese companies.

“New Balance takes pride in our longstanding commitment to domestic manufacturing—it is a valued part of our heritage and culture,” the company said in a statement responding to the complaint. “Our four New England-based factories currently employ approximately 1,000 Americans who work to produce our athletic footwear. Our brand’s success has been built and sustained by our unwavering belief that making things matters and by the craftsmanship of the men and women who work in our factories. New Balance seeks to be transparent in all consumer communications, prominently disclosing that where domestic value is at least 70%, the brand’s footwear is labeled Made in the USA.”

The lawsuit, however, directly challenges the way New Balances chooses to disclose what it means by “Made in the USA.” No “reasonable” consumer, it says, would expect a “significant portion of a shoe that claims to be ‘Made in the USA’ was not actually made in the United States.”

“Further, defendant’s disclaimer is in no way curative,” the complaint continues. “Defendant does not define the term ‘domestic value,’ meaning it is unclear from the disclaimer how much of the sneakers are actually made in the United States. Moreover, the disclaimers are not conspicuously displayed such that a reasonable consumer—especially a consumer that purchased the sneakers from a retail location—would be aware they even exist.”

The lawsuit comes three months after the consumer watchdog group Truth in Advertising (TINA) filed an official complaint to the FTC characterizing New Balance’s “Made in the USA” claims as false and damaging. The organization took special note of the new Made in the USA Labeling Rule. Signed into law in August, the rule prohibits brands from labeling any product with claims that it is produced in the U.S. unless the final assembly or processing of the product takes place on American soil.

According to TINA, “a substantial portion” of the inputs that make up New Balance sneakers, including the soles, are imported, and the false labeling has misled shoppers while harming other U.S. brands. “Such longstanding and pervasive deception not only harms consumers, but honest American companies trying to compete with one of the world’s largest manufacturers of athletic shoes,” it said.

Each violation of the FTC’s new labeling rule carries a $43,792 fine. If New Balance were to face the full fine for each of the more than 4 million pairs of shoes it claims are made in the U.S. per year, it could face more than $175 billion in fines in a single year, TINA noted.