Sites like Hypebeast and Sneaker News first posted pictures of the forthcoming Nike Air Force 1 Low “Goddess of Victory” Sunday and Monday. The images showed an all-white pair of shoes with wing-like tongues, an embroidered palm branch and, on the left back heel, “NIKE” written in Greek.

The only problem: Nike misspelled its own name. Eagle-eyed Twitter users picked up on the typo Tuesday.

“Breaking: @Nike to celebrate and honor its namesake, the Greek Goddess of Victory Νίκη, by completely obliterating her name and the entire Greek language,” wrote one user who has since racked up roughly 9,600 likes.

“Oh I cannot contain it,” wrote another Twitter user. “These make me so mad. I know it doesn’t matter, only an idiot would wear shoes that say “piks” in Greek letters and think it said Nike and I shouldn’t care what shoes idiots wear but my GOD IT MAKES ME SO MAD. THERE’S 11 MILLION GREEK PEOPLE. ASK ONE.” 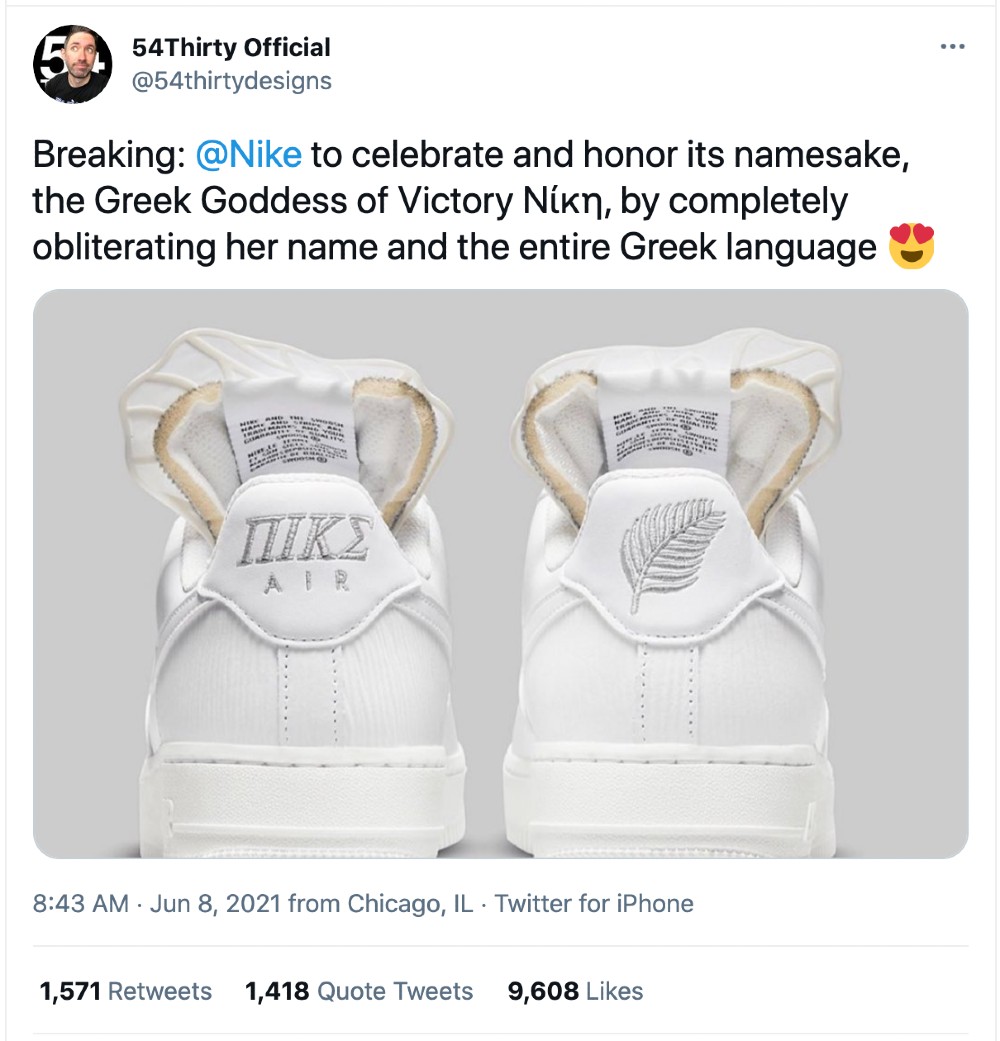 What Does the World Cup Have to Do With Garment Workers? Plenty.

The Nike Air Force 1 Low “Goddess of Victory” also includes a dictionary entry for the word “Nike” on the right insole. The graphic includes an “Ancient Greek” spelling of the word in standard sentence case that accurately uses the language’s capital “N” and lowercase “η.” This time, however, the brand appears to have made a mistake on the “k,” using what looks to be a lowercase “χ” rather than the Greek “κ.”

Nike didn’t immediately respond to a request for comment.

Though many of the related tweets have simply mocked Nike for its mistake, some are demanding the brand take real action. A Change.org petition calling for Nike to retract and recall the Air Force 1 “Goddess of Victory” sneakers, for example, has received more than 325 signatures so far.

Angie Xidias, the petition’s creator and the owner of the brand and marketing firm One Bean Marketing, said her son wears Nike and is a fan of the brand. When he first showed her the misspelling on the “Goddess of Victory” sneakers, she could hardly believe her eyes.

“At first, I told him that can’t be possible that has to be a meme and told him to check the source,” Xidias told Sourcing Journal Friday. “After seeing that this was actually real I couldn’t believe it.”

With her son upset over the error, Xidias wanted to show him there was something they can do. “Nike tells us all the time… #justdoit,” she said. When they returned home, they got to work on the petition.

“The purpose of the petition is to build awareness to preserve Greek culture and its history,” Xidias said. “I studied Classical Civilization and Hellenic studies at [New York University]. If I don’t speak up and teach my children to speak up for what is right, then who will? It’s important to get things right, Nike has a social responsibility to get it right.”

Even while she petitions Nike to recall the shoe, Xidias still says she “really likes” the brand and “its empowering messaging, their support for social justice issues and the fact that their brand is built on the Greek Goddess NIKH.” As a Greek American, she said she’s proud of that: “I just want them to do it right.”

Nike has found itself at the center of various social media backlashes in recent months. Last week, Kobe Bryant’s widow Vanessa Bryant took to Instagram demanding answers after images emerged of a Kobe sneaker she said she didn’t approve. Last month, a video criticizing the brand for the exclusivity of its adaptive Go FlyEase sneaker received millions of views and yet another video treating viewers to a world-headquarters tour prompted Instagram users to ask to see the “3rd world slaves” who they believe produce Nike’s goods.

The Air Force 1 Low “Goddess of Victory” is not even the only time Nike has found itself in trouble over an Air Force 1 release recently. In early April, while the company waged its legal battle against MSCHF for its “Satan Shoes,” the USPS called out Nike for hijacking its intellectual property for the upcoming Air Force 1 USPS. The postal agency promised to “take whatever actions it deems necessary to protect its valuable IP rights.”

The two groups resolved their differences in the end. In early May, the USPS released a new statement revealing it had come to an agreement with Nike, whereby the sneakers would continue to be inspired by the postal agency, but they would also be officially licensed by the USPS.