Nike‘s latest legal action shows it wants to be known for its Swoosh and not for any links with Lucifer.

On, Monday, the sneaker giant filed a lawsuit against Brooklyn creative studio MSCHF for its instantly infamous “Satan Shoes.”

The $1,018 sneakers, designed in collaboration with the Grammy-winning performer Lil Nas X, retool Nike Air Max 97s, adding, among other things, a pentagram pendant to the front, a reference to the Bible verse Luke 10:18 on the upper and—most notoriously—a drop of human blood mixed with red ink in the sole.

When the shoe was first unveiled days ago, pundits and politicians lashed out at Nike after mistakenly assuming the footwear brand was involved with the product. Though news reports quickly quoted Nike saying it did not design nor endorse the footwear, misconceptions proliferated and reverberated around the web.

Monday’s lawsuit, filed in the Eastern District Court of New York, seeks “to clear the confusion and dilution in the marketplace by setting the record straight,” Nike said. The unauthorized Satan Shoes, it alleges, “are likely to cause confusion and dilution and create an erroneous association between MSCHF’s products and Nike.” 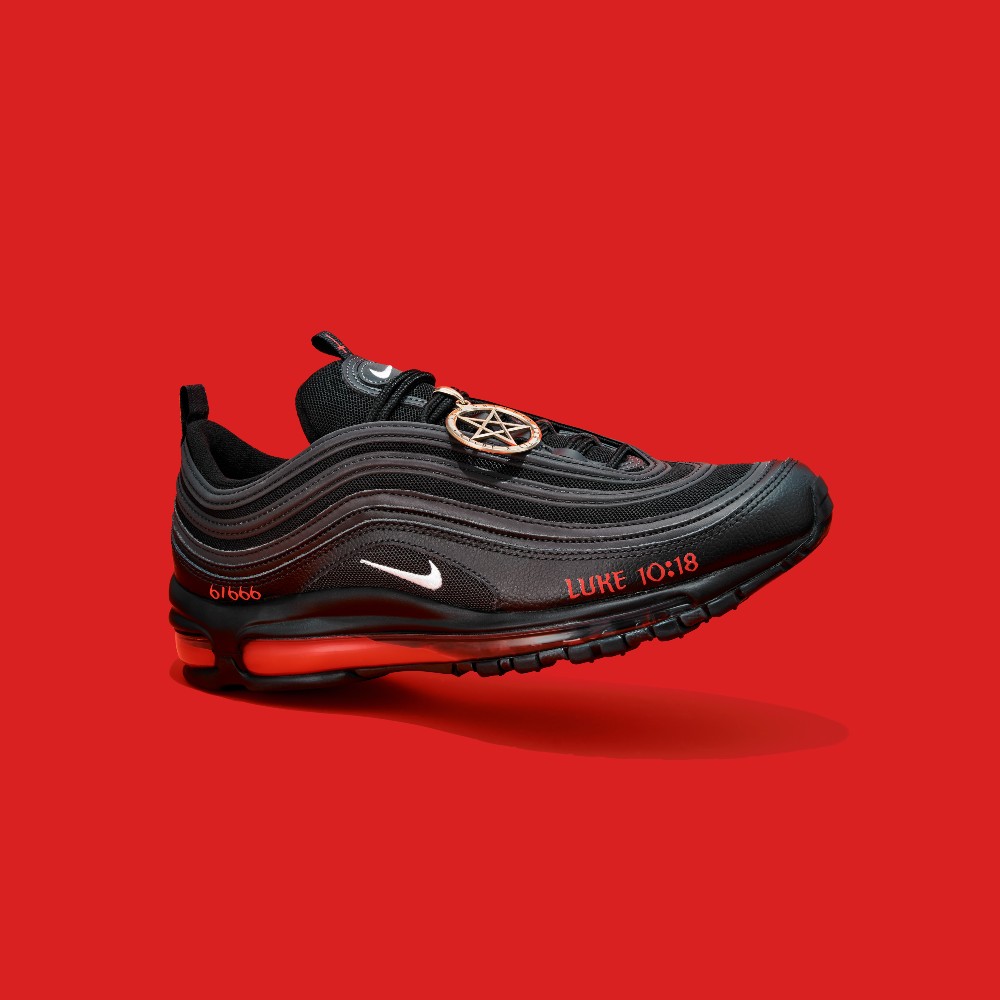 The lawsuit asserts “evidence of significant confusion and dilution” already exists, “including calls to boycott Nike in response to the launch of MSCHF’s Satan Shoes based on the mistaken belief that Nike has authorized or approved this product.”

Though MSCHF’s stock of Satan Shoes sold out in less than a minute, the lawsuit requests that the court “immediately and permanently stop MSCHF from fulfilling all orders for its unauthorized Satan Shoes.” Even after posting on Twitter and referencing the Nike lawsuit, Lil Nas X indicated that he still plans to give away the last, 666th pair of the Satan Shoes on Thursday.

The Grammy-winning rapper, who has become a central figure in the controversy, was not named in the lawsuit except when referred to as “a rap artist who apparently collaborated with MSCHF on the Satan Shoes.” The footwear arrived days after the release of his latest single “Montero (Call Me By Your Name),” which sees the “Old Town Road” hitmaker visit the depths of hell and give a devil-looking figure—presumably Satan—a lap dance.

What Does the World Cup Have to Do With Garment Workers? Plenty.

The suit places a special focus on the inclusion of Nike’s Swoosh logo on the offending shoe, asserting that it is up to Nike, not third parties like MSCHF, to decide what products feature its logo. The Satan Shoe made no adjustment to Air Max 97’s logo placement, retaining its placement on the upper and tongue.

Fara Sunderji, a partner at international law firm Dorsey & Whitney’s New York office with a background in trademark, copyright, clearance, prosecution, maintenance, enforcement and litigation, described Nike’s Swoosh as “probably one of the most recognizable non-word trademarks in the world.”

“You see it and you automatically think of Nike as the source of the good on which it appears,” Sunderji said. “Nike’s case here is pretty simple to understand: MSCHF is selling Nike Air Max 97’s that have been modified in a way in which Nike does not approve. People see these Satan Shoes and think they come from Nike and some people don’t like that. Nike therefore claims that the release of these Satan Shoes is harming its valuable brand.”

Sunderji said she believes MSCHF will likely argue it is protected under what’s called the First Sale Doctrine, a theory that allows third parties to resell trademarked goods. However, she added, that doctrine is limited to the sale of “genuine goods.”

“The doctrine is based on the premise that consumers are not being deceived because they are receiving what they have bargained for, the trademarked good,” Sunderji continued. “Under Second Circuit case law, goods are not genuine if they do not conform to the brand owner’s quality control standards.”

Nike also asserts that unless stopped, MSCHF’s Satan Shoes will “continue to cause confusion in the marketplace, including but not limited to initial interest confusion, post-sale confusion, confusion in the secondary sneakers markets, and dilution by blurring and tarnishment.”

MSCHF’s Satan Shoes do not represent the company’s first foray into footwear. In fact, they’re not even the first time it has sold revamped Nike Air Max 97s. Back in 2019, MSCHF released what it called the “Jesus Shoe.” Like the Satan Shoe, it made several adjustments, attaching a crucifix to the front laces, injecting “holy water” in the sole and inserting a religious-themed sockliner. They too kept the Nike logo unchanged.

Originally sold for $1,425, the Jesus Shoes soon landed on resale sites, with prices listed as high as $4,000 on StockX, according to CBS News. It appears StockX recently removed its listing for the Satan Shoes’ holier predecessor. When searching Google for the product, an ad still appears showing it listed at $1,750 on StockX. Clicking on the link, however, now just leads to an error page.

Assuming Nike did not previously sue MSCHF over its Jesus Shoe—creative director Kevin Wiesner told The New York Times last year it “would’ve been rad” to receive a public disavowal from Nike or the Vatican—Sunderji said the Brooklyn brand could argue Nike’s failure to protest in the past “acts as a consent to the Satan Shoe on a theory of acquiescence, waiver or estoppel.” Those theories, she noted, are complex and difficult to prove.

“Given the known facts, MSCHF has an uphill battle on all fronts,” she continued. “The law does not require that trademark owners go after each and every infringement to maintain their rights. Such a rule would be cost prohibitive.”

MSCHF did not immediately respond to a request for comment.