It appears months of Covid-related factory closures have not soured Nike’s view on Vietnamese manufacturing.

Vietnam’s Prime Minister Pham Minh Chinh met with Noel Kinder, Nike’s sustainable development director, at the COP26 Conference in Glasgow, Vietnamese state media said Wednesday. At the meeting, Kinder announced that all Nike factories in areas disrupted by the pandemic had returned to production and that the company was committed to investing and expanding production in the Southeast Asian nation.

In late September—a week before Vietnam would ultimately abandon its “zero-Covid” strategy and ease restrictions in Ho Chi Minh City and its surrounding provinces—Nike executive vice president and chief financial officer Matt Friend said the company had lost 10 weeks of production due to the pandemic. At that time, 80 percent of Nike’s footwear factories in Vietnam and nearly half of its apparel factories were closed. Vietnam accounted for 51 percent of Nike’s footwear unit production last year.

The factory closures, combined with other global supply chain impacts, prompted Nike to lower its revenue growth guidance for the 2022 fiscal year—a period that began June 1—from the low-double digits to the mid-single digits. At the time, Friend said the Vietnamese factories would ramp up to full production “over several months.”

Nike expands to the metaverse

Facebook is not alone in looking to capitalize on the metaverse.

Trademark applications filed last week show Nike is also scoping out the virtual world, where Gen Z is rewriting the rules of engagement. Though the words and logos the seven trademarks would protect—Nike’s signature Swoosh, the Jordan Jumpman, the company’s “Just Do It” slogan—are nothing new, they would apply to goods and services that are, including “on-line, non-downloadable virtual footwear, clothing, headwear, eyewear, bags, sports bags, backpacks, sports equipment, art, toys and accessories for use in virtual environments.”

Nike has shown an interest in virtual footwear for years, filing multiple patent applications related to “cryptographic digital assets” in 2019 and in the years since. Though some are still pending, the United States Patent and Trademark Office (USPTO) has granted at least three, one in 2019 and two since June.

The patents—filed long before non-fungible tokens (NFTs) exploded into the public consciousness earlier this year—repeatedly reference what Nike calls “CryptoKicks,” virtual collectibles backed by unique, non-fungible tokens. In some implementations, the patents note, these CryptoKicks could be imported into one or more other digital platforms, such as a skin on a video game character.

Last week’s trademark applications are not the only signs that Nike is looking to ramp up its work on virtual product creation. The company also recently posted job openings for “virtual material designers,” including one focused on footwear. In both cases, the listings say whoever gets the position “will play a key role in redefining our digital landscape, ushering us into the metaverse, and growing our team’s capabilities.” Though the postings on Nike’s website are undated, listings tied to the company’s LinkedIn page are identified as one week old.

Even as it cuts ties with retailers like DSW and Urban Outfitters, Nike is doubling down with at least one “premium” wholesale partner—Dick’s Sporting Goods.

Dick’s unveiled what it dubbed a “first-of-its-kind collaboration” with Nike Wednesday. The partnership will allow customers to connect their Dick’s Scorecard and Nike Membership accounts through the Dick’s mobile app. It will also include member-exclusive footwear and apparel collections and in-store events. 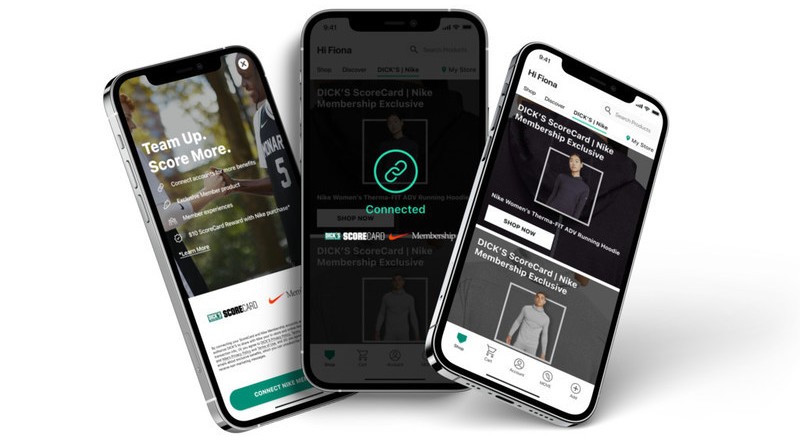 “Dick’s and Nike have a long and successful history of working together, and this partnership represents a significant strengthening of our relationship,” Lauren Hobart, president and CEO of Dick’s Sporting Goods, said in a statement. “We are both focused on delivering best-in-class experiences and products and creating the best omnichannel experience for our athletes.”

Tom Caporaso, CEO of loyalty provider Clarus Commerce, said the alliance proves Nike’s partnership with Dick’s is a valuable one for the brand.

“Nike has significantly reduced its partnerships and physical store presence to spend more time on direct-to-consumer efforts, which has been more profitable throughout the pandemic,” Caporaso said. “However, in-store shopping is rising again, and according to our recent research, at least 18 percent of U.S. shoppers this year plan to make the majority of their holiday purchases in-store, and Nike still wants to reach those customers.”

The partnership will allow Nike or Dick’s loyalty members to drop off Nike returns at Dick’s Sporting Goods locations. Caporaso said the perk will be “a huge benefit for shoppers” within range of one of Dick’s more than 700 stores. “This is a great way for Nike to provide loyalty members with a better return policy after the holidays, which is important to shoppers this year according to our data,” he added.

Nike’s Dick’s partnership comes during a boom time for athletic footwear. According to the “Future of Footwear” report the NPD Group released Wednesday, growth within the performance- and outdoor-footwear categories will outperform the overall footwear market in 2023.

According to NPD vice president and senior industry advisor for sports Matt Powell, the biggest news in sports footwear is the growth of running, walking and hiking. After strong growth this year, he said, performance footwear is forecasted to stay steady, at rates slightly higher than before the pandemic, as unit sales increase. “With the pandemic instilling in consumers a new appreciation for being outside, revenue and unit sales for hiking shoes are projected to continue their healthy annual rise through 2023,” Powell added.

“After years of continuous declines, the next two years are looking up for performance footwear,” Powell said in a statement. “Running will be the key area here, as I expect we’ll see performance-running shoes return as streetwear. It has been nine years since these shoes were viewed as a fashion trend, and today it will require brands and retailers to rethink the cadence and content of their footwear releases.”

Fashion footwear, meanwhile, is expected to lag the market, even as some “key silhouettes” make a full recovery to pre-pandemic revenue by 2023, NPD said.

“Bright spots will be silhouettes that support the more casual and comfortable lifestyle consumers have become accustomed to,” Beth Goldstein, NPD’s fashion footwear and accessories analyst, said in a statement. “However, that doesn’t mean that pumps, oxfords, and loafers won’t return to some level of growth over the next few years. With the return to offices and events happening more gradually than initially anticipated, the retail rebound for these silhouettes will be more elongated.”