Following the success of the Zoom Freak 1, Nike has unveiled its second signature shoe built on the unique athletic prowess of Milwaukee Bucks MVP Giannis Antetokounmpo.

With multiple color ways dropping on July 25 and August 7, the Zoom Freak 2 sneaker was created to support the NBA player’s most iconic moves on the court, the brand said, making his strategy even more effective.

Antetokounmpo is known for his Eurostep, a fake-out tactic in which a player takes a step in one direction and then a quick step in the opposite direction in order to evade a defender and make a play for the basket, Nike said in a statement.

“What Giannis does in space is directly connected to his body proportions,” Ross Klein, senior creative director for Nike Basketball, said. “What’s different about his movements is that he’s causing so much pressure when he hits those steps, like the Eurostep, that we need to help propel him and contain him further near the toe.”

Antetokounmpo’s 6’11 frame allows him to speed across the court in just a few strides. According to Nike, the shoe is designed to help facilitate fluid movement, control his quickness and provide support throughout a fast-paced game.

A decoupled outsole is separated into front and back lobes, connected in the center by a shank embedded in the shoe’s midsole. Designed to keep the player grounded as he drives off his forefoot, a reinforced “outrigger” zone on the shoe’s lateral side near the pinky toe marks where Antetokounmpo lands as he gathers his dribble. It fortifies the area, which is subject to significant wear-and-tear, and gives him more contact with the ground below for a stabilized platform. 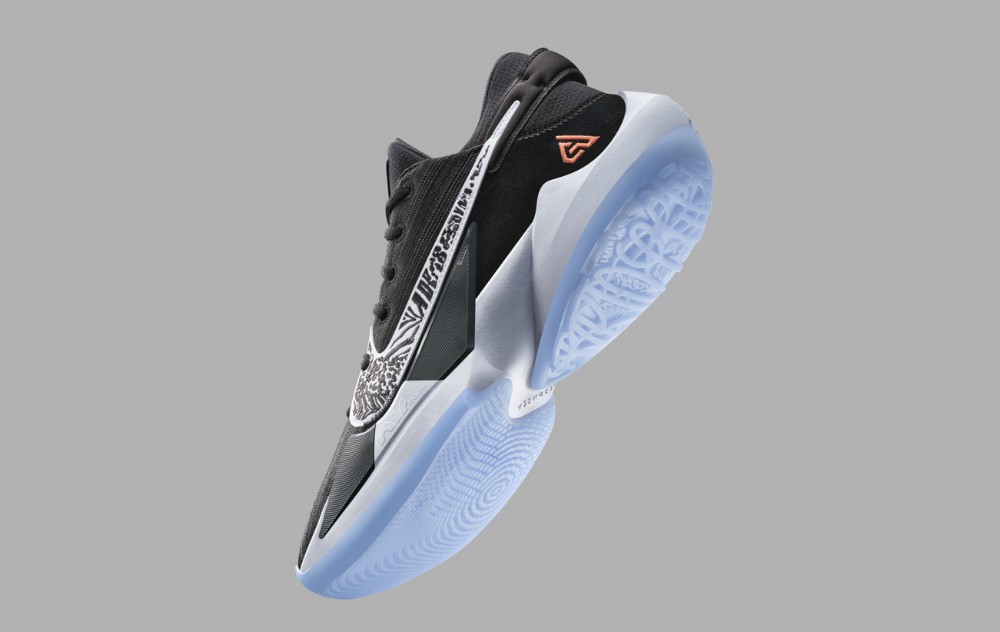 “In the Freak 1, we focused on how frequently Giannis gets vertical for rebounds, blocks and dunks,” Klein said. “For the Freak 2, we shifted our attention to more planes of movement, because Giannis can command every spot on the floor.”

The shoe also helps give Antetokounmpo dynamism on the court through its upper construction, allowing his foot to bend and flex in critical areas. “When athletes like Giannis produce so much pressure through their movement, the foot naturally wants to slide out of the footbed,” Klein said.

To combat this, Nike reworked the shoe’s boundary zone—or the area from the second eyelet to the bottom of the throat. The shoe offers more containment, holding the foot in place securely, but opens up at the point where Antetokounmpo’s foot requires greater range of movement. The shoe shouldn’t restrict him, but help him move as naturally as possible, Klein added.