This Presidents Day weekend, one of the world’s largest brokers of luxury goods will mark the occasion by listing a one-of-a-kind presidential sneaker for $25,000.

The first major drop of Sotheby’s online Buy Now platform, the President Barack Obama Player Exclusive Nike Hyperdunk will become available for purchase Friday. The listed pair is considered one of only two pairs known to exist, according to Sotheby’s.

“It’s a pleasure to bring such a unique item to market,” Brahm Wachter, Sotheby’s director of e-commerce development, said in a statement. “We hope it will be a slam dunk.”

Created in 2009—an interior label pegs the production date as Oct. 22—the shoes are the single confirmation sample for a pair of basketball sneakers made custom for then-President Barack Obama. Twelve years later, the shoes are in “incredible condition,” according to Sotheby’s. The listing mentions only one blemish: “small mark on right sole near Swoosh.”

The sneakers reflect the “United We Rise” Hyperdunk created for and worn by Team USA at the 2008 Beijing Summer Olympic Games. They feature white leather uppers, blue Swooshes and visible Flywire technology. Custom details include the official Presidential Seal on the tongue and embroidered 44’s to honor the 44th commander in chief. Patriotic graphics such as bald eagles and the date “1776” decorate the insole.

The shoes, a men’s size 12.5, will go on sale Friday at 4:44 p.m., another nod to Obama’s status as the 44th president of the United States. They are available for viewing by appointment at Sotheby’s galleries in New York City this week. 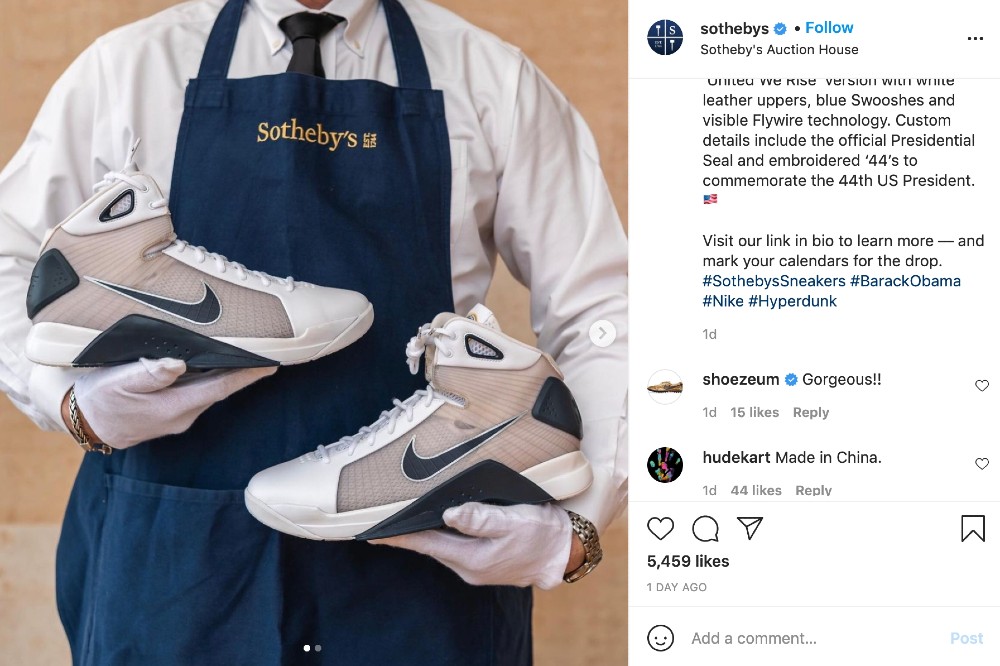 The shoes are not the only custom Nikes designed for the former president. When he visited the footwear giant’s Oregon headquarters in 2015 to promote the Trans-Pacific Partnership, Nike presented Obama with a collection of custom sneakers, including the first pair of Jordan MTMs and a pair of Nike Air Force 1s in red, white and blue.