The German sportswear brand introduced what it’s calling a “new era” of soccer footwear Thursday. The Faster Football “movement”—not to be confused with the Faster+ track and field line Puma introduced earlier this week—kicks off with the Ultra 1.3 boot this week.

“Faster Football is an invitation to all fans, all players around the world to join the movement,” Gary Dixon, head of business unit marketing, teamsport, said Thursday at a press event unveiling the new soccer shoe. “Moving forward it will be everything, it will inform everything that we… do. It will define our product creation.”

In that spirit—and well aware of the growing number of women playing soccer—the “Forever Faster” brand designed its new Ultra 1.3 boot in two styles: women’s and unisex. Lilly Cocks, senior developer teamsport footwear, said the company started out by first comparing the differences in the male and female foot anatomy. Alongside that, she added, the team ran comparison test studies with some of Puma’s female players.

Both styles feature a re-engineered lightweight Matryxevo woven upper made with technical carbon yarns and transparent Mono yarns. The upper also further trims down weight by introducing cut-out transparent windows in the mid-foot. Other upgrades include a GripControl Pro skin that now coats the entire upper.

Despite all of Puma’s research into the anatomical differences between women’s and men’s feet, Cocks said the company is “very aware that not every female has the same foot.” A female consumer with a slightly wider foot can use the unisex style, she said. Likewise, a male player with narrower feet can turn to the women’s boot. 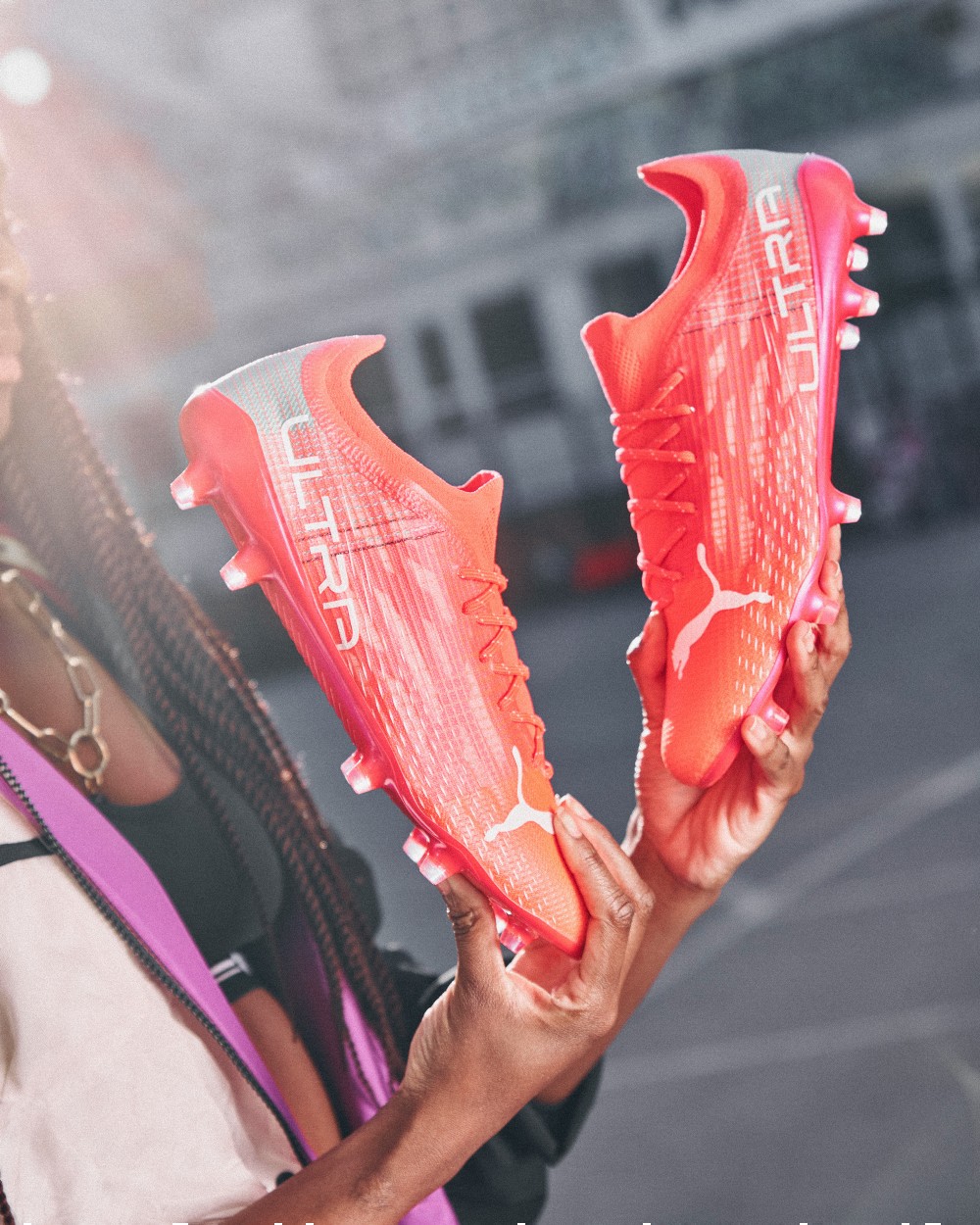 Esme Morgan, a professional footballer with Manchester City, said she immediately noticed a difference when she tried on the Ultra 1.3 boot.

“As soon as I put it on, I was sort of struck by how comfortable it was,” Morgan said. “A lot of the time—because I’ve got really narrow feet—when I wear boots I feel like they’re sort of hanging off me and they’re far too big, but when I tried the women’s specific fit I was really struck by how nicely it fitted on my foot.”

Morgan, who recalls spending hours at sports stores with her mother trying to find a shoe that fit her properly, also highlighted how important a proper women’s shoe is for younger players. “It definitely makes life easier,” she said.

She and Norwich City’s Todd Cantwell both praised the shoe’s weight. “It feels like you’re wearing socks or nothing at all,” Morgan said. According to Cocks, a U.K. size 8 weighs 158 grams, or “lighter than your average smarter phone.”

Puma is not the only sports brand working to address the specific needs of female athletes. Earlier this month, Asics debuted what it called “the first ever women’s specific wrestling shoe.” Designed to address the anatomical differences between male and female feet, the Matblazer utilizes an asymmetrical lacing system that creates a more contoured and compression-like feel.