Reebok is the latest footwear brand to build a performance sneaker from “things that grow,” and talented partners, brand president Matt O’Toole said, have played a crucial role in making new generations of product possible.

Developed by Reebok’s five-year-old Future team, the Forever FloatRide Grow will launch in Fall 2020 as the brand’s first performance shoe made from sustainable, natural components, following on the heels of the casual, undyed Cotton + Corn shoe that quickly resonated with shoppers when it bowed last year.

Bloom, the algae-based liner beloved by sustainability-forward brands, chips in the sock liner. And trees in Thailand and in Vietnam, where the sneaker is manufactured, contribute natural, renewably sourced rubber.

Reebok has been making a concerted effort to shift its supply chain and product development toward eco-friendly materials, and today, close to 40 percent of its material library replaces virgin plastic with recycled alternatives. But mimicking the performance standards of an athletic shoe with new and natural inputs is not without its challenges, O’Toole said in an interview Monday, and requires close collaboration with innovative partners.

Before it began working with Reebok, for example, Japanese firm and polymer maker Sekisui Chemical lacked experience in the footwear industry, having carved out a business with automotive companies and other sectors. Bill McInnis, who heads up the Reebok Future team, firmly believes the best ideas tend to bubble up from outside the industry, as the well-known, go-to suppliers “are talking to every company” in the business, he said, driving little differentiation.

Creating a performance shoe from nature-grown ingredients scrambles the traditional product design process. McInnis noted the considerable “legwork” that goes into finding partners who can supply or co-create materials that don’t yet exist. And then there’s the issue of cost, “which always comes into the equation at some point,” he added.

The Cotton + Corn shoe, for example, sold at a 50 percent premium relative to a comparable, conventionally produced casual sneaker. Reebok cut the Forver FloatRide Grow’s premium by more than half, down to 20 percent, and is targeting a lower range of 10 percent to 20 percent in the future, McInnis explained. 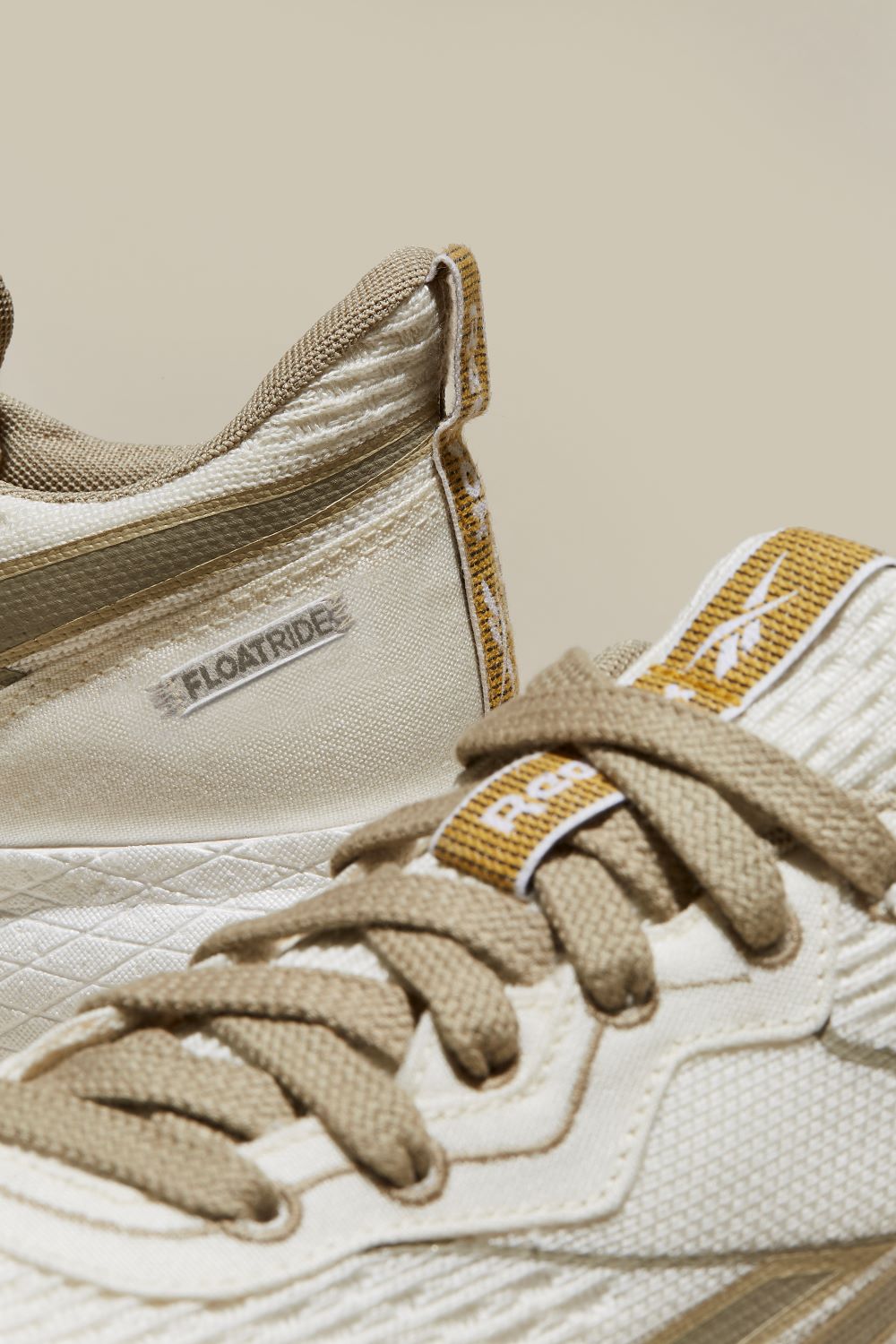 “Younger consumers, and particularly the performance running consumer, [are] willing to pay,” he added.

To get an accurate read on how the sustainable sneaker measured up in real life, Reebok kept its quorum of test runners in the dark about the shoe’s alternative componentry and still, McInnis said, “the feedback was fantastic.” Plus Reebok’s Human Performance Lab, which obsessively tests how shoes pair with people, described the outcome as great for a “regular performance shoe, regardless of whether it’s plant based or not.”

Product testing with dedicated athletes also yielded invaluable insights that informed and amended the design process, McInnis noted. An early iteration of the sneaker featured an upper created from birch tree-derived fibers, which pavement-pounders said showed signs of pilling—something that doesn’t typically happen with a running shoe. “They didn’t seem too happy about it,” he said.

In a fortunate turn of events, the eucalyptus alternative “didn’t seem to have that same problem,” he added, “and it actually turned out to be more breathable and a little more stable in terms of stretch as well.”

As Reebok continues down the path toward releasing sneakers designed with care for the environment, the Future team keeps “the entire lifecycle of the process and the product in mind,” McInnis said, and that encompasses “where you make it, what you make it with, what materials are used in that, and then ultimately what happens to the product or when consumers are done with it.”

Among the Future team’s side projects: figuring out how to increase the average lifetime of a running shoe from the standard 300 mile average to something closer to 1,000, the R&D guru said. If sustainability centers of creating products with natural resources in mind, then inflating a shoe’s longevity has to be part of that equation.

That’s proving to be a tough nut to crack. “We’re still kicking that one around a bit, so we’ve got some ideas on it,” McInnis said. “But you’ll start to see things like that folded into the mix as well.”

Despite the prevailing notion that Gen Z leads the charge on the climate change front, sustainable products are generating interest from a “cross-section of consumers,” McInnis noted.

“We’re seeing the consumer respond positively to eco-friendly messages and wanting to spend against things they believe in,” O’Toole added.

And if this momentum encourages large-scale companies to “go faster” and scale up conscious products, “that’s a good thing,” he said.

“But I think what it’s showing everyone is we’ve got a large consumer segment that’s very eager to be spending against more environmentally friendly concepts,” O’Toole said.