These three heritage boot brands, Timberland, Wolverine and Dr. Martens, are breaking tradition by updating their core styles to suit the changing wants, tastes and lifestyles of modern consumers, proving that even icons need to be refreshed from time to time.

The quintessential work boot brand Timberland has a new look these days fusing heritage styling with athletic influences. The boots are lighter and sportier, taking cues from the athleisure trend. But don’t be fooled, Timberland’s boots are still the same quality that’s earned the brand a loyal following for almost a century.

With the success of SensorFlex and the introduction of Timberland’s new AeroCore energy system for 2017, we chat with Don Desalvio, Timberland senior director of men’s casual footwear, on what it takes to update a beloved classic.

VAMP: People often equate the weight of a boot to its quality. Was it a challenge to retrain the way consumers perceive quality and performance with the latest Timberland boots?
Desalvio: I think that remains true in certain consumer segments and you would expect something like our original Yellow Boot to have some weight to it, but that mindset has certainly started to shift in other product categories. Take sneaker boots for example. When we design sneaker boots or other footwear that takes inspiration from the world of athletic, we make sure we stay true to our heritage and design them to the highest standards. Things like premium leather uppers, rust-proof hardware and quad-stitching are hallmarks of Timberland durability and can be found in these unique hybrid styles. Additionally, today’s younger consumer has become accustomed to lighter, more comfortable footwear so these attributes are expected now more than ever.

VAMP: How is SensorFlex an improvement from what Timberland previously offered?
Desalvio: SensorFlex is about being ready for anything at anytime. Its three-layer outsole delivers constant support, active cushioning and dynamic flex. Previously, if you were looking to make a lighter, more comfortable outsole you may have selected a soft EVA with higher rebound, but in doing so you’d give up certain features like traction. SensorFlex goes beyond that with a firm upper layer that provides all-day comfort and stability, a softer EVA middle layer adapts to uneven surfaces and the bottom outsole layer features a grooved sole that flexes with every step. 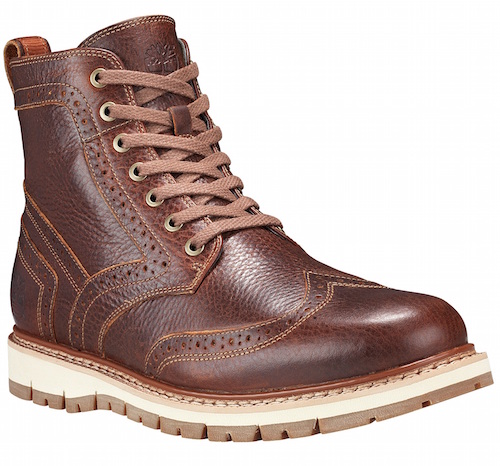 VAMP: What influence has athleisure had on your decision to update Timberland’s core products?
Desalvio: Athleisure continues to be a driving trend in both apparel and lifestyle markets, which fits our brand really well. Its athletic influence is all about products that are adaptive and versatile where functionality is casually concealed making them suitable for all aspects of your day. SensorFlex allows us to deliver exactly that with all-day comfort in city-appropriate silhouettes, which is where our consumer spends most of their time. And don’t forget—the original Timberland Field Boot was dubbed a first-of-its-kind sneaker boot when it was released in 1983, so versatile footwear of this kind is not new to our brand.

VAMP: What is the risk involved in updating a classic?
Desalvio: We’re fortunate enough to have iconic products that are truly loved around the world, and we work very hard to protect them. When we approach updating classic styles or reimagining them in a new way, we view it as an expansion of the line instead of a replacement. Taking this approach allows us to leverage all of the tried and true details that make each style iconic, and infuse them with new innovation and modern design in a way that solves for new needs without compromising what consumers love about them.

VAMP: How have consumers responded to the updated product?
Desalvio: We introduced SensorFlex into the line in Spring 2014. The versatility of the platform allows us to incorporate it into anything from sport-inspired styles with athletic white outsoles to boots and casual footwear. It’s performing so well it continues to grow every season and the infusion of modern technology into our favorite products across genders expands the consideration set for consumers and retailers alike.

Today’s consumer wants the comfort and agility that athletic footwear gives them, but they also appreciate the authenticity and versatility of craftsmanship.

VAMP: What was the tipping point that made Timberland decide to go in a new direction with these latest designs?
Desalvio: We’ve developed a winning design formula called, Style + Performance + Green, that blends form and function in a way that’s distinctly Timberland. SensorFlex allows us to combine our rugged heritage with modern design and performance elements to create amazingly versatile product in terms of both how it looks to how it feels. We’re always working to solve for consumer needs both on the style and functionality front. Today’s consumer wants the comfort and agility that athletic footwear gives them, but they also appreciate the authenticity and versatility of craftsmanship. With the incorporation of SensorFlex, we’re in a unique position to deliver what the consumer is looking for.

VAMP: What’s new from Timberland for 2017?
Desalvio: One new and very exciting product technology that is releasing in 2017 is called the AeroCore energy system. AeroCore takes deep inspiration from athletic footwear with not only how it performs, but also how it looks underfoot. The thicker, rounded white outsole provides a sharp contrast to heritage leather uppers and its new lightweight sole design offers high rebound cushioning and comfort in every step. AeroCore lets you stay lighter and faster on your feet and really takes underfoot performance to the next level.

Reinventing the Classics: How Athleisure and Technology Are Influencing Heritage Brands, Page 1 of 3