It often takes an outsider to disrupt an industry. And Rem D. Koolhaas, founder and creative director of United Nude, has disruption in his blood. His uncle and namesake is a Pritzker Prize-winning Dutch architect, known for shaking up established conventions, who worked as a journalist before turning his attention to buildings. So it’s no surprise to learn that the younger Koolhaas studied architecture before a broken heart shifted his focus toward footwear.

The first shoe he designed, the Möbius, was made from a single strip of carbon fiber that united the upper, outsole, footbed and heel into one infinite piece. Inspired by Bauhaus legend Ludwig Mies van der Rohe’s iconic Barcelona chair, the Möbius was such a departure from the norm that Koolhaas was persuaded (by none other than Miuccia Prada and Sergio Rossi) to start his own brand. After linking up with Galahad Clark (of the shoe-making dynasty), United Nude launched in 2003.

“Coming from an architectural background has given me the freedom to design whatever I want because some of our shoes would never have been designed by a normal footwear designer,” Koolhaas said. “For me, each single pair of United Nude shoes is a reinterpretation of an architectural object or represents an exploration of different materials and colors. For each design I always start from a very clear and basic concept that is either a play on space or on gravity, which can be defined as an architectural approach.” 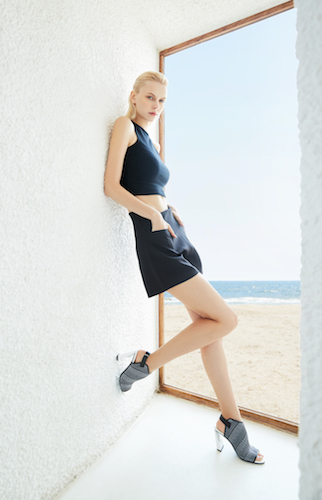 Today the brand is sold in 40 countries around the world, has 10 flagship stores and sells more then 200,000 pairs of shoes a year. It’s also known for producing out-there designs (some made entirely with a 3-D printer) and collaborating with boundary-pushing people like Iris van Herpen and Zaha Hadid. Not bad for an outsider.

How This German Innovator's Boot Adapts to Wearer's Foot

“We launched the first shoe without me having any training in footwear—and I still don’t have any school training—but I got into shoes through practice. Now we make many shoes, but that’s always been the challenge, coming in as an outsider,” Koolhaas shared. “At the same time, it’s that outside experience that has helped me design some of the innovative shoes I create. We broke the rules not because we wanted to break them but because we did not know them.”

It’s fitting, then, that United Nude is no stranger to using 3-D printers. In 2014 the brand released a 3-D-printed shoe called Float (printed in three parts that clicked together to form the final product), made on-site at its New York City flagship store using 3D Systems’ compact consumer printer Cube. The following year the two companies teamed up again for a project titled “Re-Inventing Shoes” that saw five of the world’s leading architects and designers create limited runs of 3-D printed shoes from hard nylon and soft rubber.

“We just like to experiment with all sorts of technologies, including 3-D printing. It allows you to create amazing new things, but for now just for our limited-edition projects and collaborations as it’s still too costly for mass production,” Koolhaas said.

United Nude’s extreme creations range from hoof-like to heel-less to 12-inch stilettos covered in tiny gold men. But wacky designs will only take you so far and building a successful brand requires a balance between creativity and commercial awareness.

“With some of our more exclusive shoes we only sell a couple of hundred pairs, but with others we sell 100,000 pairs,” Koolhaas revealed, adding, “At United Nude we want to create something that is commercial and wearable but also keep on developing the more out-there designs.”

That being said, United Nude sees itself as more of a lifestyle than a fashion brand and its customers are just as interested in technology and industrial design as they are in wearing conceptual footwear.

“I like having new versions of a good design. The fact that the new iPhone works the same as the previous one is attractive because you don’t have to relearn it,” Koolhaas said, noting his aversion to the ever-increasing speed of today’s fashion cycle. “We like to create different shapes and sculptures of products that are less designed or we develop something that we did before with the same shapes or materials because not everyone wants extreme products.”

Proportion, he said, is paramount to good design. That’s why United Nude’s creations will always be guided by clarity, elegance and innovation—the same principles the Möbius was built on.