The fashion industry’s desire to optimize speed-to-market is nothing new.

Wolverine Worldwide, the Michigan-based footwear conglomerate behind brands like Saucony and Hush Puppies, has been looking at its supply chain for the past decade, investigating ways to improve in areas like design, accuracy and inventory control, Barry McGeough, the company’s global vice president of innovation, said during a webinar with French trend forecasting firm Heuritech on Wednesday.

“We know that we need to get faster to market,” Sean McDowell, vice president of design and development at Wolverine’s Sperry brand, added. “We know that the closer we get to market, the better our predictability is, the clearer that crystal ball becomes. We have really good visibility when we get close and when we’re 18 to 24 months away from market, it’s more like we’re taking guesses—educated guesses—but it’s a lot harder.”

This past year, Sperry pushed itself to reduce its production timeline down to just three months. With the help of Heuritech, it not only succeeded in this mission, but managed to sell out the resulting boot in just 10 days.

Likely one of the most time-consuming elements that Sperry cut out was the sampling phase. Rather than spending six to eight weeks making one prototype only to make a couple changes and then develop a second, Sperry simply developed a few options, surveyed consumers and went straight to production. To get to the point where it trusted that those few design options would work, the brand relied on Heuritech’s social media-informed artificial-intelligence forecast model.

In all, Heuritech provided Wolverine and Sperry with 10 to 15 trends, Faustine Tobée, the forecasting firm’s head of client success, said. For each, it provided data on how it was growing and its magnitude relative to the larger market, as well as images pulled from social media of how consumers were applying the given trends.

How Crocs, On, Wolverine and Genesco Will Evolve in 2023

The Sperry design team loved seeing Heuritech’s forecast, McDowell said. However, while it simplified inspiration, the hard decisions of choosing what exactly to do still remained. To simplify the process, he said, the brand simply kept pruning its decision tree.

“So we said, ‘Okay, we’ve got 90 days, we’re going to do something for Christmas, what is our bestselling product for Christmas? It is our Saltwater boot,’” McDowell said. “So that becomes the No. 1 silhouette. Okay, so let’s dive in a little bit more to boots. And what can we do in that 90-day cycle? We can’t invent something from scratch. We can’t open up new tools. So, let’s do color imprint.”

Once Sperry had narrowed down its options, it looked at the colors Heuritech had picked out, selected the five it thought fit best with the selected boot style and created digital models for each. It then took these choices to its consumers, asking more than 3,000 individuals to pick out the style they liked best. They landed on “Windsurfer Blue.” 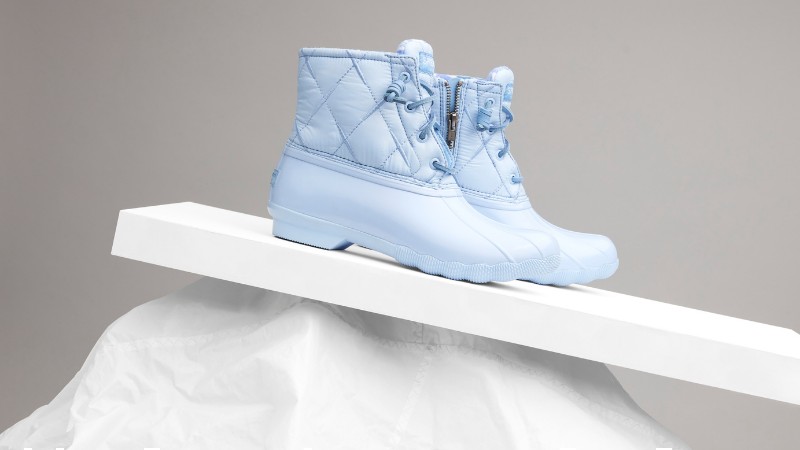 With the digital model in hand, Sperry jumped right to production. Leading up the product’s launch, the brand talked it up on social media and showed its followers how to style and wear it—something McDowell said it had never done before. By Dec. 3, it was up on Sperry’s site. Within 48 hours, 84 percent of the product was sold. In 10 days, it reached 100 percent sell-through. Of those who bought the boot, 71 percent were new to the brand.

“That was probably one of the best metrics for us, right,” McDowell said. “It’s very easy for brands to get stuck in a rut doing the same thing over and over again, and you can become predictable, you can become expected and then no one sort of tunes into your brand because they don’t know what you’re going to bring that’s new and fresh. So, this opened up the aperture, it brought in much younger clients for us.”

Given the success it saw with this first collaboration, McDowell said Sperry will continue to consult with Heuritech on future capsules “every season.” Looking ahead, he added, the brand plans to go bigger, possibly doing three or four boots at once or a boot and a sneaker.