Only slightly more than a decade ago, consumers were using separate devices for email, Internet browsing, taking photos and listening to music. But when Apple introduced the iPhone in 2007, the gamechanger brought together multiple tasks in one sleek gadget.

Just as Apple changed the face of phones, orthotics and comfort footwear maker Aetrex is forging a similar revolution in foot scanning devices with the launch of Albert 2. Building on the technology developed for its first 3D device the Albert 1, the compact all-in-one Albert 2 scanner can capture 3D images of both feet as well as data about pressure points in just 20 seconds. Furthering the comparison to Apple’s creation, the Albert 2 scanner is designed to be easy for retailers to use.

“Just because stores have been doing foot measurement a certain way for all these years, doesn’t really mean it’s the right way to do it,” said Larry Schwartz, CEO of Aetrex. “We believe Albert 2 should be in all types of stores that sell footwear. It’s quicker and easier to use than a manual solution like a Brannock device.”

Albert 2 is made for the brick-and-mortar retail environment. The customer’s experience with the device begins with a 10-second 3D scan that captures information including the length, width, girth, instep height and arch height of both their feet, accurate to one-tenth of a millimeter. Following that, the device can also do a pressure scan, which takes another 10 seconds. Shoppers can either stand still on the device’s iStep pressure plate technology for a static capture or walk across it to gather data about how their foot is hitting the ground while in motion.

The comprehensive scan is faster than the competition. Since most other devices on the market specialize in either 3D scans or pressure measurements, stores that want to offer a comparable service to the Albert 2 would typically need to have customers move between two different devices, making the process take multiple minutes.

Despite having more features than the competition and its predecessor, the Albert 2 takes up minimal room on a sales floor. The device is only 30 inches long and approximately 2 inches tall, with four 11-inch-tall towers.

Albert 2 was also designed to be simple and intuitive to operate. But for retail staff who want more background in the technology and insoles, Aetrex offers online and in-person classes.

Similar to the iPhone’s Siri, Albert 2 comes with its own virtual assistant. Aptly named Albert, the 3D character can be given voice commands, including, “Hey Albert, start scan.” The artificially intelligent helper also uses chatbot technology to answer consumer questions, such as defining foot conditions or explaining an ideal orthotic for customers. Aside from the purpose of helping get consumers in the right size shoe, Aetrex developed Albert 2 to serve as an educational platform for foot health. Immediately after the scan, the device will use machine learning and the consumer’s results to suggest orthotics that will fit their unique needs. 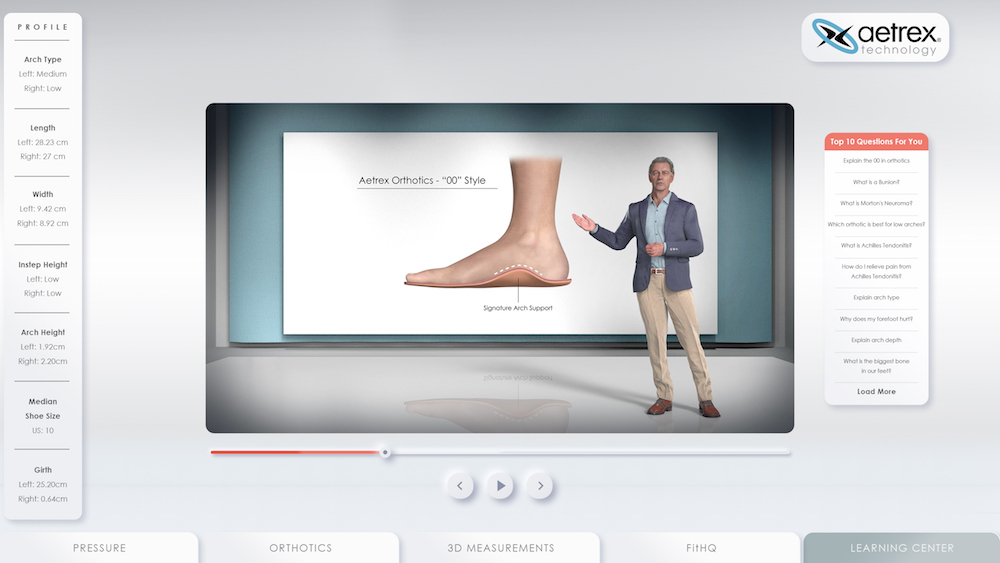 Consumers’ engagement with Albert 2 can even continue outside of the store. If they submit their email at the time of their scan, they can access a profile with their information at any time. Retailers will also own the data, enabling them to target shoppers with the footwear that is best for them. By leveraging this information in-store and online, merchants can drive sales while also reducing returns that are tied to fit.

“One of the biggest variables in shoe fitting is the shoe,” said Schwartz. “And a half of a size is only one-sixth of an inch. Thanks to this technology, we can learn how shoes run and help identify shoes that you’re going to really love and to make sure that they fit the right way.” 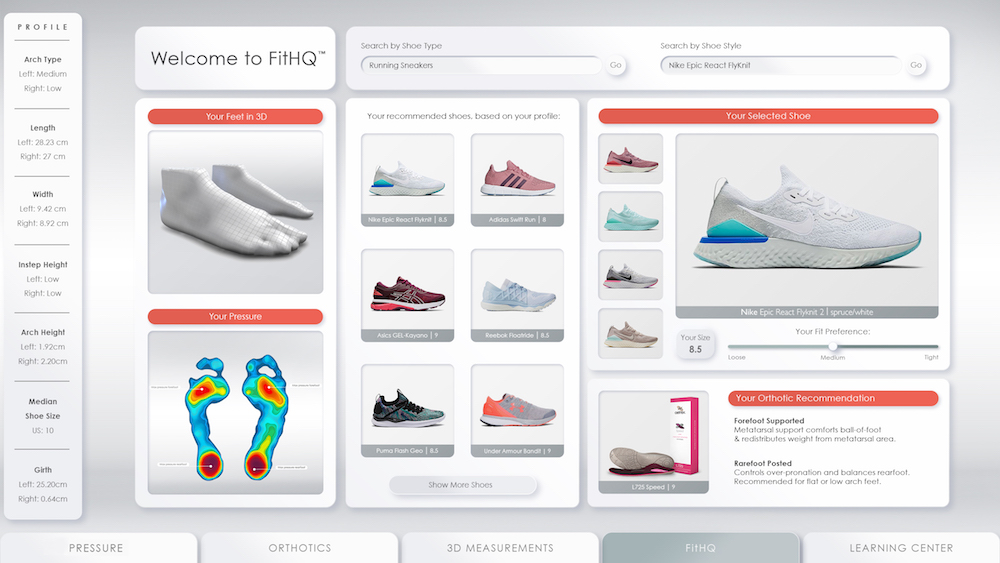 With footfall to brick-and-mortar stores on the decline, Albert 2 gives retailers the ability to offer customers something they can’t experience online. By adding foot scans, stores can also raise sales per customer in-store. The foot scans are an opportunity to upsell customers on orthotics, insoles and accessories that will make their shoes more comfortable. This not only earns retailers more dollars, but creates satisfied, loyal customers.

For retailers, the addition of the scanner can also be low risk. Aetrex offers stores the option to stock insoles on consignment, allowing them to gain add-on sales without upfront costs. The company’s unique position as an insole and footwear manufacturer also means the Albert 2 costs about half the price of competitive devices. Retailers pay $2,495 for the scanner and $150 per month for the software.

“We’re the only company that develops hardware, software and the orthotic program,” said Schwartz. “We’ve actually used the data that we’ve captured from 3D scanning and from pressure scanning for so many years to create the orthotic lines. And that integrated business model allows us to have the best pricing in the market for this type of technology.”

Retailers can also use the data gleaned from foot scans to inform product development and allocation based on their customers’ actual sizes.

“After a certain amount of scanning with the Albert technology, you can really see the type of feet that your customers have, and we hope that that data will be used to develop footwear that will have an improved fit and comfort performance for consumers,” said Schwartz.

The Albert 2 launched for trade in October 2020, with deliveries to customers slated in late February 2021. Click here to learn more about the Albert 2.