Asics is all about bringing science and sensors to sneakers.

At CES in Las Vegas this week, the Japanese footwear and fitness brand showed off all the tech, research and innovation required to craft world-class running shoes that drive measurable improvements for performance athletes and casual exercisers alike.

Though it can be said that innovation has somewhat stagnated across the footwear sector as a whole, the performance segment is where shoe brands have devoted countless hours and dollars to producing sneakers that give runners an edge—big business in the world where marathons and major races dangle tantalizing cash prizes, not to mention the lucrative endorsement deals that await top athletes.

Asics brought scientists from its Institute of Sport Science (ISS) and the braintrust from recently acquired Japanese tech startup No New Folk Studios—which develops sensing solutions to make shoes “smart”—to give visitors to its Energy Research Lab a look at how new materials, designs and techniques can benefit workout warriors.

A critical and delicate joint, the ankle influences much of a runner’s performance. “Ankle friction is very important” when talking about energy-saving properties, ISS researcher Norihiko Inomata told Sourcing Journal, describing the joint’s movement as “essential” for stride optimization.

Injuries to the ankle are common among runners, accounting for 10 percent of the physical ailments that take these athletes out of commission, according to a study by Michael J. Arnold, MD, and Aaron L. Moody, MD, of Florida’s Naval Hospital Jacksonville published by the American Family Physician journal in 2018. And newbie runners—likely uninformed about best practices—injure themselves at twice the rate of those regularly engaging in the sport, their study claimed.

That’s why ISS researchers investigated how advanced sneaker design can reduce ankle damage and help wearers conserve the energy expended while springing from step to step. Researchers focused on limiting movement and exertion at the ankle joint, which, a brand spokesperson said, triggers an energy-conserving ripple effect on the body’s other critical nexuses.

To enable this leap forward in performance, Asics developed new Guidesole technology it hails as among the most important innovations in its 70-year history. Providing lightweight support and stability that collectively reduce the ankle’s range of motion, Guidesole enhances the brand-new Evoride sneaker, which builds on the initial energy-saving MetaRide shoe that launched last year in February. The CES prototype featured a jacquard knit upper that redistributes rigidity and virtually eliminates any chafing brought on seams, Inomata said. 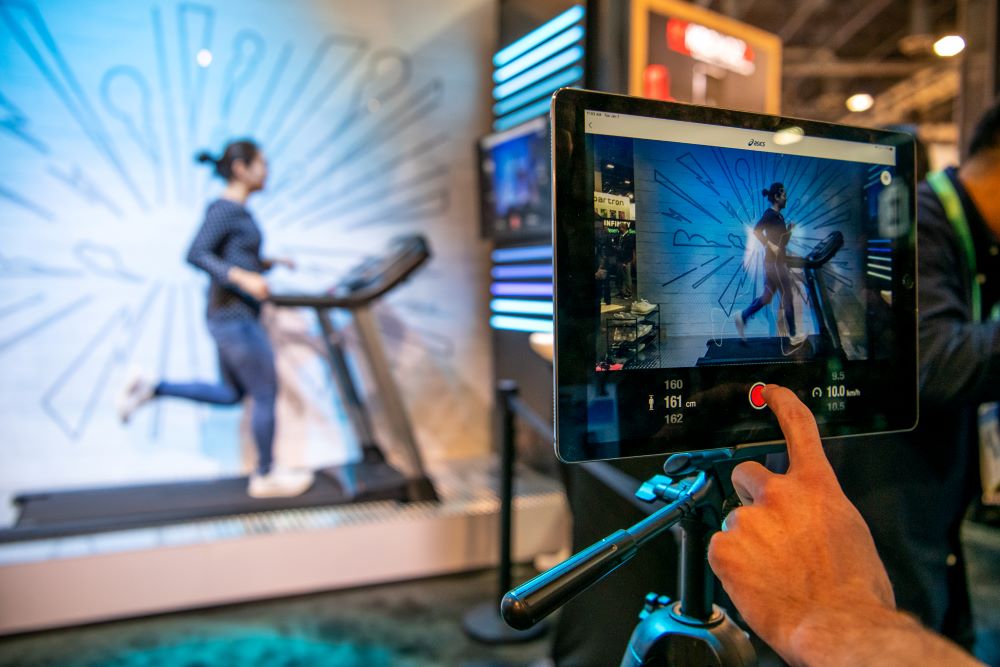 How much of a performance difference the EvoRide can make varies from one wearer to the next, but tests have shown a 4 percent reduction in the ankle’s range of motion—a notable step toward keeping runners healthy.

A sensor dubbed Orphe Track, developed by No New Folk and embedded into the shoe’s footbed, tracks a range of data from stability to kick strength in a real time so runner’s can adjust their gait and approach as needed. (EvoRide shoes launching at retail on Feb. 7 will ship without a sensor, Asics said.)

To visualize the impact of its new high-tech shoe, Asics filmed test runners wearing its legacy Nimbus shoe versus pounding the treadmill in the new EvoRide sneakers, which are available in men’s and women’s sizing. Side-by-side video compares how each shoe alters or enhances the test subject’s strides, steps and ankle motions, offering actionable performance insights.

Already available at Asics’ Fifth Ave. Mahattan flagship, these Running Analyzers are rolling out to six other full-line stores, a spokesperson said, to enhance the retail experience.

“Coming to CES is a springboard moment for ASICS sports innovation,” Asics president and chief operating officer Yasuhito Hirota said in a statement.

“I’m really pleased to be showcasing the incredible innovation that is normally hidden away in our ISS labs, especially in a year that is so important for sport, for Japan and—of course—for Asics as well,” Hirota said, referring to the Summer Olympic Games set to open in Tokyo on July 24.