Consumers may be flip-flopping in their retail spending behaviors, but they’re proving to be loyal to the summer footwear category.

“We’ve always said that when times are good, we do well. When times are bad, we sometimes do better,” said Brian Curin, president of California-based Flip Flop Shops. “People may stop buying the $200 or $300 pair of shoes and they may stop going out for a nice dinner when the economy is shaky, but they still need the utilitarian flip-flop.”

In fact, Curin said the 2017 summer season is off to one of its strongest starts in recent years for the casual footwear retailer, with positive year-over-year comps and an uptick in repeat customers. This is thanks in part to consumers’ increasing tendency not just to grab a pair of flip-flops for summer getaways, but also to add high-quality, versatile sandal styles to their wardrobe for everything from date nights to weekend hangouts.

Old favorites like Rainbow, Birkenstock and Olukai are all performing well for the 75-plus-unit retailer, while newcomers like Vionic and Hari Mari are fast becoming fan favorites, too.

Curin said Texas-based Hari Mari has excelled by filling some of the “white space” in the sandal industry, avoiding the traditional surf market and instead creating outdoor styles for rivers, lakes, dunes and more. “They’re focused on the specific lifestyles that are not just coastal, and have created a quality product that sort of has an old-school feel,” he said.

“We’ll always be focused on the footwear piece, but we realize that there are other categories we can bring in to really enhance what we’re doing for the customer.”

Next month, Flip Flop Shops will be teaming up with one of its most successful brand partners, Rainbow, to release an exclusive Founders Edition sandal co-designed by Curin and Rainbow’s Jay Longley. The limited-release flip-flop—which takes the brand’s best-selling silhouette and updates it with nautical-inspired design and a blue and white color scheme—will be available for purchase in U.S. Flip Flop Shops. Though only a handful of pairs will be available for purchase in each shop, Curin said the retailer may bring it back as a standard style in stores depending on customer feedback and sales performance.

In addition to this special project with Rainbow and giveaways with brands like Reef and Havaianas, Flip Flop Shops is also devoting time to growing its brick-and-mortar footprint both globally—in countries like Australia, New Zealand, India, Saudi Arabia, Japan and parts of Europe—and in its own backyard, with hopes of operating more than 500 franchised units by 2020. Over the past handful of years, it has also implemented a strategy to open in more nontraditional locations, including airports, theme parks, lifestyle centers and resorts. The retailer is even going mobile with its new floating retail design, a 200-to-300-square-foot unit shaped like a giant flip-flop. 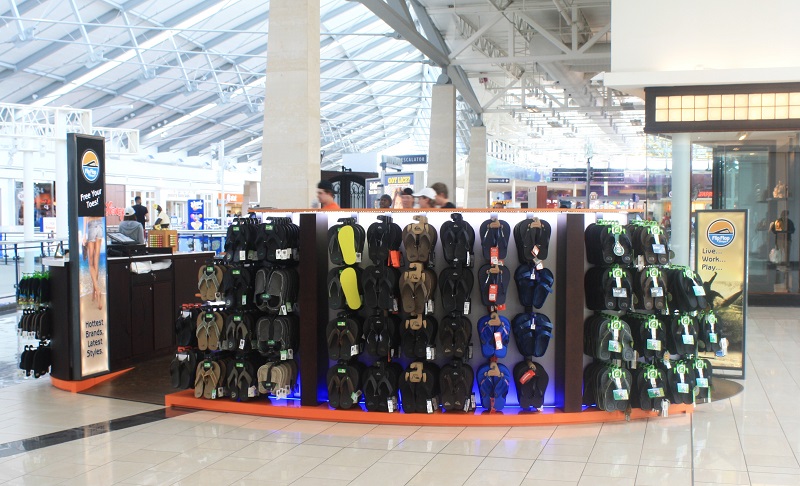 The first floating store opened in Dallas, Texas, earlier this year, and is designed so that customers shop in the footbed and check out at a POS station in the toe post. Curin said both consumers and landlords have been fans of the design, while the company is excited about the flexibility it offers. “We can open almost anywhere overnight with limited effort,” Curin said. “It allows us to take the concept to where people are, instead of trying to find that right retail location where people might be and hope they’re there for years to come.”

In addition to expanding with new markets and designs, the company is also developing the digital side of its business. In February, it launched FlipFlopShops.com, where it plans to deliver a more robust lifestyle experience to online shoppers. “There’s a whole culture around this category that touches all aspects of this life,” Curin said of the summer footwear category. “We’ll always be focused on the footwear piece, but we realize that there are other categories we can bring in to really enhance what we’re doing for the customer.”

Curin said it was crucial for the online side of the business to work seamlessly with its brick-and-mortar shops. To that end, it offers profit sharing for franchisees and will soon launch a buy online, pickup in-store feature that gives shop owners the chance to capture additional sales from customers retrieving their orders.

“The digital side is one that we’re going to put a big effort into,” Curin said. “It’s a good blend for us.”