Ebay’s Memorial Day Weekend event encouraged sneakerheads to wear their scores instead of stashing them away as collector items.

The online marketplace brought its sneaker selection to the physical retail realm by collaborating with sneaker marketplace SoleStage to stage a Los Angeles popup between Supreme, Grails and The Hundreds on Fairfax Ave.

Over three days, visitors to eBay‘s “Wear ‘Em Out” store could shop a curated selection at reduced prices—as long as they agreed to walk out with the shoes on their feet instead of in the box.

Garry Thaniel, eBay’s general manager of sneakers, said internal research inspired the experiential event. A survey of more than 1,000 sneaker buyers found that the majority wear less than half of their collections. “With sneaker collecting on the rise and with many collectors preserving valuable pairs as an alternative investment class, it is well known that many collectors buy shoes and save them for a special occasion, or just keep them in deadstock condition to keep their value,” Thaniel said.

Though many will want to keep their shoes in pristine condition, “there is also tremendous value in wearing and enjoying a great pair of kicks,” he said. “The goal with The Wear ‘Em Out store is to encourage sneakerheads to live in the moment and show off their favorite styles on their feet this summer,” which is “difficult to do if they are kept in a box,” he added.

The eBay team tapped Offset, a member of the rap trio Migos, to help develop the popup’s assortment. The self-proclaimed sneakerhead’s collection includes more than 3,000 pairs—all the cred needed to qualify, Thaniel said.

“eBay is my go-to place to find the kicks you can’t find anywhere else,” Offset said in the lead-up to the event. But many buyers struggle with wanting to have their cake and eat it, too. “For sneaker collectors like me who lay awake at night trying to decide if you’re going to wear your new kicks, eBay’s Wear ‘Em Out store makes light of something that haunts the entire sneaker community,” he said. The experience “gives people a new way to access the shoes they want for summer.”

eBay also developed an in-store, multi-terrain installation featuring stone, cement and turf. Customers who walked across the setup received a real-time video packaged into an Instagrammable reel-style clip by the time they left the store.

The location showcased 10 different styles each day, from the Jordan 1 Retro High OG Patent Bred to the Yeezy Boost 700 Wave Runner, along with “new releases that would normally only be available at deadstock prices,” Thaniel added. On Saturday, consumers could purchase the Concepts x Nike Air Max 1 SP, the recently released Nike Lebron 9, the Patta x Nike Air Max 1 Wave, the Adidas Yeezy Boost 350 Y2, and the Off-White x Nike Blazer Low. Styles sold for up to 70 percent lower than retail pricing, shaving off $100 or more, in most cases. 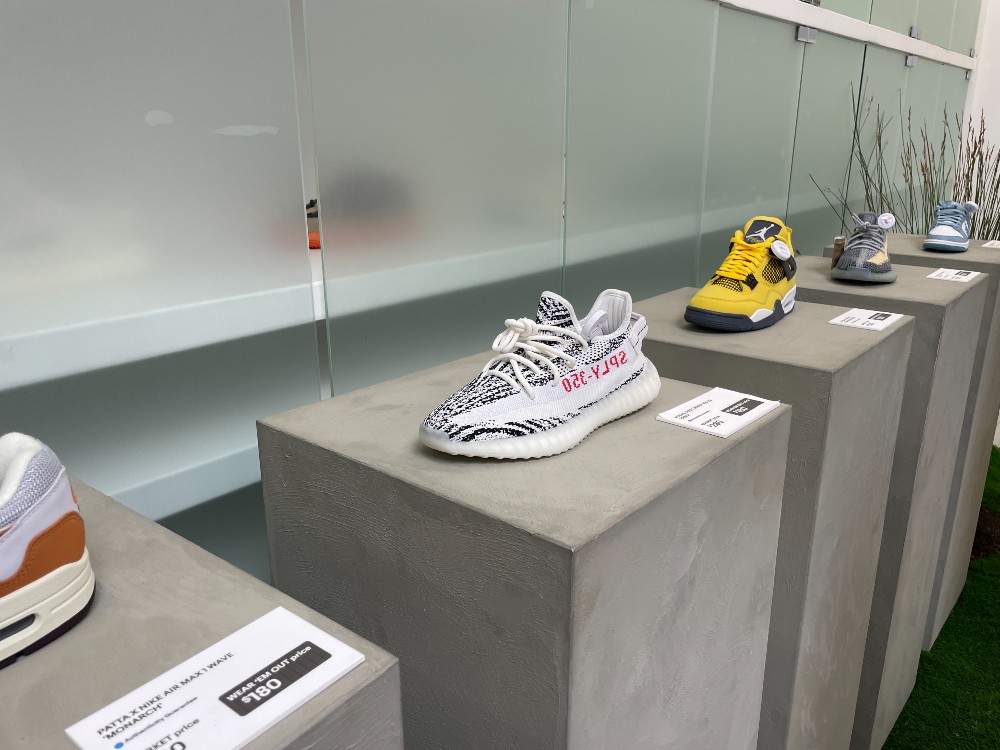 “The reception so far for this weekend’s event has been tremendous, and many people are asking for the Wear ‘Em Out store to come to their city,” Thaniel said.

Dozens of sneaker fans lined up outside the store during the early Saturday afternoon, with some saying they waited up to two hours to get in. “We weren’t 100 percent sure we wanted to wait, but I think it was worth it,” David Ark said after scoring the Union LA x Nike Dunk Low in the Pistachio color way. Attendees didn’t know which sneakers would be available at the popup, and showed up hoping to get a great deal in their size.

Ark and others waiting in line caught wind of the Wear ‘Em Out store through Instagram. “I like the sneaker culture—it’s all about art and passion,” he said. But he wouldn’t characterize himself or his buddies as collectors. “I don’t have a lot, just a few pairs. I’m slowly getting there, dipping my toe in.”

Beyond the potential to score something special, the philosophy behind the event resonated with Ark. “I wear my shoes—they’re worn out, they’re wrinkly,” he said, noting that he prefers to use his favorite pairs instead of worrying about whether they’ll retain their resale value. “I thought it was an interesting way to get people to come down [to the store], to not promote collecting, and to make people wear them out.”

“I love sneakers, and I work to buy what I want,” said Derria Underwood, a fashion and lifestyle content creator who owns more than 60 pairs and was drawn to the eBay event because of her experience shopping for kicks on the platform. “I’ve used the eBay guarantee before to buy sneakers, and I know that they’re authentic,” she said, noting that StockX, GOAT, and the eBay are her “top three” destinations for streetwear finds. 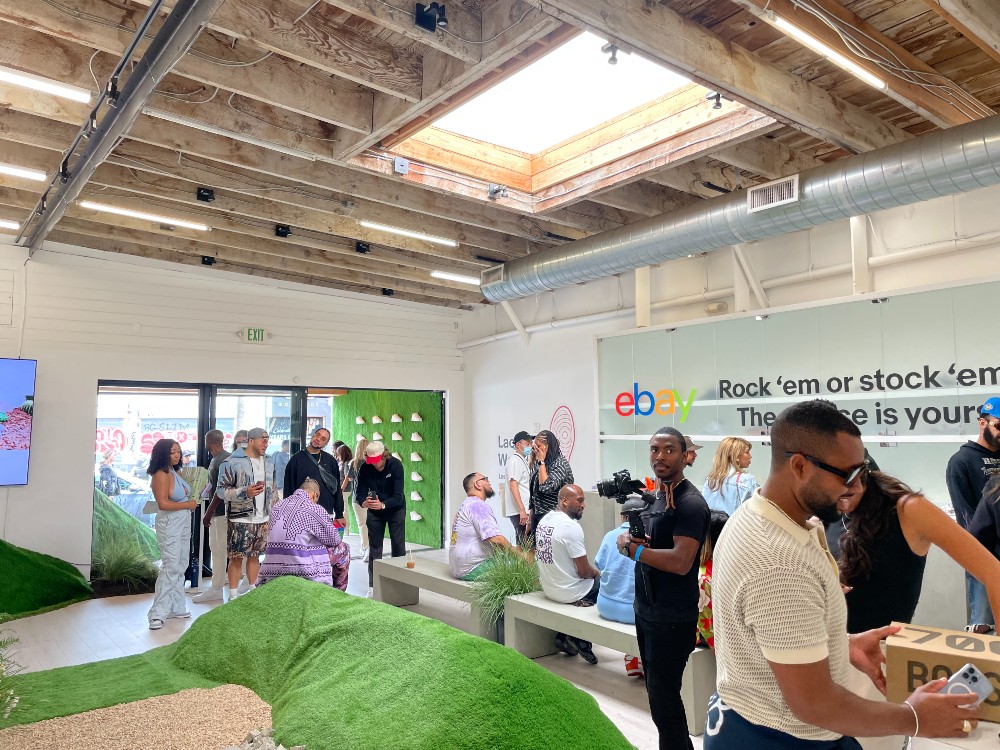 “Obviously I’m a diehard Nike fan, because that’s what I grew up on, and that’s what fills my wardrobe,” she said. “Next would be New Balance because they are doing their thing,” she said, pointing to the Boston brand’s high-profile collabs. Underwood tried on a pair of Yeezy 350 Boosts in Ash Blue, but ultimately decided the color didn’t suit her.

Though Underwood does her research and invests selectively, she said she tries to enjoy the shoes she owns. “I do have the ones that I try and take care of, that aren’t going to be an everyday shoe—but I don’t want to buy anything that’s just going to sit on the shelf,” she said. Underwood often rotates between a few styles for a time before pulling out something fresh.

“It just kind of depends on what type of collector you are—for me, I want to be able to wear it,” she added. “If you can get a discount just by wearing them out, I’m open.”